Saturdays in the South = SEC Football 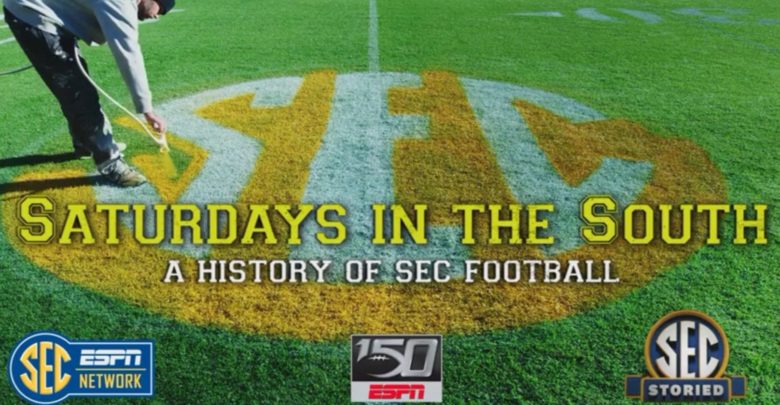 Per Matt
Never worship your heroes. But in the South, it’s a way of life. Tradition. Reverence. Familiarity. Pageantry. And Family. These are only a handful of elements involved with college football, which brings people together each year who might not otherwise have a lot in common. Small-town life elevates rivalries as hometown heroes get the opportunity to shine in the spotlight. Saturdays in the South: It just means more.

Directed by Fritz Mitchell, Saturdays in the South: A History of SEC Football, is an eight-part emotional journey throughout the conference’s past. Each two-hour episode focuses on a limited timeframe (usually around nine years), highlighting the best of the best via archive footage and interviews from those in the know, including authors, professors, historians, sportswriters, ex-players, coaches and fans alike to give commentary and behind-the-scenes stories that only add to the many well-known tales.

Life is a team. Life is a group. Everyone has to work together in order to succeed. Back in the days before social media, way before nationwide radio broadcasts existed, football was a means of public relations. For the working class, football was almost all they had. It was a form of escapism and the pride of any given community as backyard battles became the basis for good old-fashioned hate among the schools and their alumni.

From its humble beginnings, Southeastern Conference teams were viewed as not being good enough, fighting for respectability by the rest of the country. Winning ugly often didn’t get the same recognition as the massive blowouts by the country’s more-established schools and each one had to fight against a lot of bias and pressure. Revolutionary changes and growth transpired, creating new chapters of history practically each year. And then there was segregation. Transcending hateful voices from their opposition (and sometimes chancellors from their very own schools), the players struggled, survived and grew as young men, as their stories are incredibly personal, giving me a deep appreciation for all that they went through.

Many of the conference’s best players make appearances, such as Joe Namath, Archie Manning, Derrick Ramsey, Herschel Walker, Bo Jackson and Peyton Manning. Many of the legendary coaches are highlighted, including Paul “Bear” Bryant, Steve Spurrier, Pat Dye, Les Miles, Nick Saban and even Phil Fulmer makes a brief appearance. It really was interesting to learn how each one approached the game differently, with football being a math problem to one, while others equated military tactics with football. In fact, my favorite segments focused on Brig. Gen. Robert Neyland, who coached between different wartime missions. As an alumnus of the University of Tennessee, it was great to learn he was undefeated coaching against Bryant throughout his career, leading the Vols to nine undefeated seasons and four national championships along the way.

The SEC has a whole lot more to offer than just the University of Alabama (although the school does receive a lot of well-earned attention). As much as a hater I am of ‘Bama, I just couldn’t dislike “Bear” Bryant’s demeanor, work ethic and values, so I’m shocked to find myself respecting the mythical coach even more. Commissioner Roy Kramer received some attention for the changes he implemented to the game, as well as broadcaster Keith Jackson of ABC Sports, who did a lot to grow the sports’ popularity. Lots of today’s talking heads are also shown in their heydays.

“Like all good legends, the source is lost in antiquity.”

The included video — sometimes grainy, sometimes black and white, much of it not in high-definition quality — stands the test of time, detailing the national-championship aspirations of everyone involved, bringing great behind-the-scenes tales to life. I found myself tearing up multiple times per episode, as realistic stories of survival are depicted that just about anyone can relate to. It is an emotional journey for the viewer, to say the least.

As a lifelong sports fan, I truly enjoyed watching this documentary series. And having lived through different eras of its evolution, it’s an incredibly nostalgic experience, one which I didn’t want to end. Those who forget history are doomed to repeat it and through this series, I hope than no one will ever forget how multiple college teams from the South rose from humble beginnings, uniting to become the preeminent football conference in all the nation.