Say It Ain’t So: It’s The Last Sharknado! 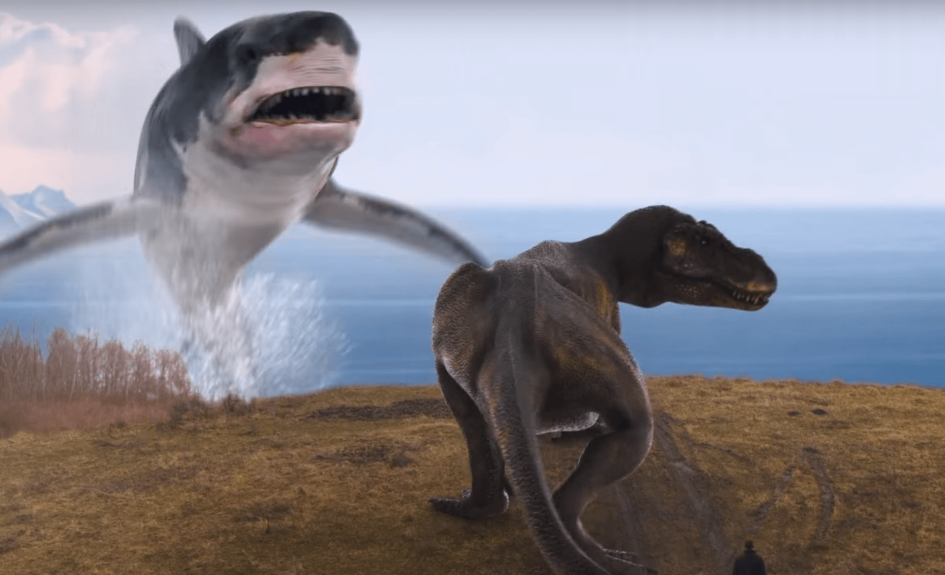 Is that a megalodon in my sharknado? Look out, dinosaur! Photo Courtesy: The Asylum

The Sharknado franchise uses unconventional storytelling techniques by combining weather catastrophe and monster movie genres to form a survival horror, sci-fi disaster movie that’s become one of the biggest TV movie franchises The Asylum has ever created and Syfy has ever aired.

Each Sharknado film defies reality to create a low-budget, fun movie that’s easy to enjoy (especially if you’re playing a drinking game while watching). For the most part, these movies defy reviews (and reason). They’re just cheesy fun. In The Last Sharknado: It’s About Time, Fin (Ian Ziering) must destroy the very first sharknado in order to save the future of humanity. There’s time travel involved, altering of history, discussions of destiny, outrageous end-of-the-world scenarios and an army of Tara Reed robot clones that have taken over the world. Almost every storytelling trope imaginable was crammed into its two-hour time frame. Like I said, the movie is review-proof, so just go with it.

There’s taming dinosaurs during the prehistoric era (this is no Jurassic World: Fallen Kingdom), dragon sharks attacking during medieval times (using a Game of Thrones riff), somehow the British attempt to use a sharknado as a weapon in the Revolutionary War, the 1950s are visited via a beach party concert, the late ’90s makes the timeline even grungier and an accidental trip to the Planet of the Aprils in 20013 proves there’s just too many Taras (one is more than enough).

It’s About Time basically wipes away past sequels, reuniting the main characters minutes before their deaths in past incarnations. There’s fewer celebrity cameos than in past chapters (blame it on the budget), bad acting, ridiculous storytelling and cheesy special effects — every element you can expect from a movie with a title like Sharknado. If Syfy and Asylum execs can be taken at their word that this really is the final movie for the franchise (say it ain’t so!), you should expect a spin-off in the near future. At one point, Fin’s friend chooses to live in the Colonial American time period rather than return to modern-day civilization. Surely he can find a ridiculous scenario (or two) to save the world that history neglected to record. That should be good enough for a couple of TV movies, at least.

A Humvee is used a time machine, borrowing too much from Back to the Future and there’s the requisite 90210 jokes (Tori Spelling plays Ziering’s mother), so there’s that. There’s a timenado (really?) and an anticlimactic ending that finally wraps up Fin and his franchise. So, should you watch this film? Do you like monster movies? What about slashers? How about horror movies of any kind? Then this movie is absolutely right up your alley! It’s as believable as any of those previously mentioned genres, but a bit more outrageous. Again, if you can just go with the premise, it’ll eventually become entertaining.