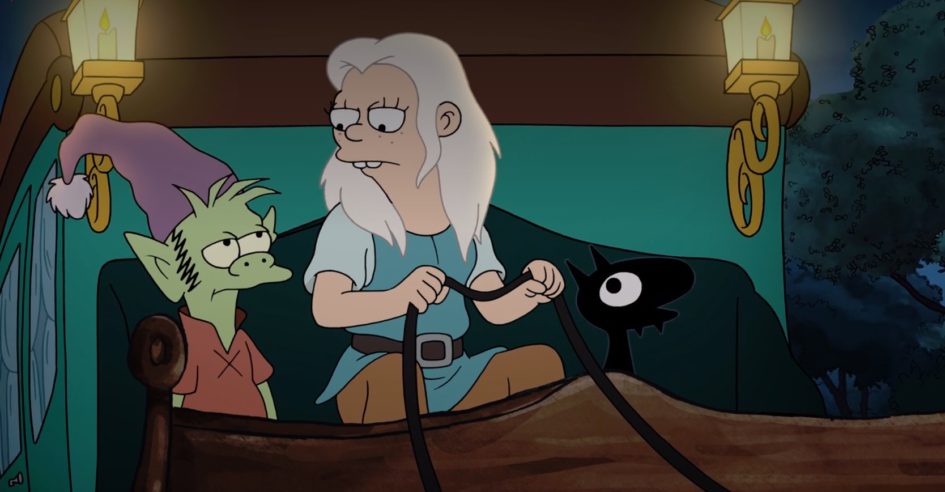 You might want to taper your expectations when watching this latest entry from the creator of The Simpsons and Futurama. I expected more from Matt Groening, but a couple episodes into watching Disenchantment, I became… oh, what’s the word I’m looking for? Disappointed? Disillusioned? Disheartened? How about… disenchanted with the show.

Don’t get me wrong, it’s a great idea for a show and the animation looks fantastic. The signature style seen in Groening’s shows like The Simpsons and Futurama is on full display. I could also pick out several voice actors from Futurama lending their talent to supporting characters in Disenchantment. Unfortunately, the story is slow, the pacing is poor, the writing weak and the dialogue is drek.

Seriously, like a comedy movie that puts all its best lines in the trailers, you’ve already seen the best humor from this show:

And if you’re going to defend Disenchantment by saying that it’s not supposed to be a comedy, that’s fine. But Shakespeare should have taught us that you need a good comic relief to keep the audience watching a fantasy or medieval drama. That’s why we have Trinculo in The Tempest, Yorick (“Alas, poor Yorick! I knew him…”), The Gravediggers in Hamlet and Falstaff in Henry IV. Both Disney and Don Bluth animated features find the heroine or princess with a funny talking companion or pet. For Princess Bean in Disenchantment, the best we get is Luci.

While I didn’t laugh out loud, I would chuckle at some of the lines Luci would deliver. In retrospect, I realized that most of these lines were delivered for shock value, as opposed to being genuinely funny. For instance, in the third episode the three friends steal a carriage and go joy riding. It’s happens right before that scene in the first trailer where the carriage sinks into the lake.

Lines like that would make me balk or make my eyes go wide in surprise. But not laugh. His character does get some development later in the series during an exorcism involving him and Bean. He’s also a clever demon (he’s described as Bean’s “personal demon”) when he investigates the plot’s mysteries or when he finds out how to use the crystal ball later in the series. The rest of the time he drinks, smokes and eggs the party on to do disreputable deeds. So, he’s kind of like Bender from Futurama… just not as funny.

If Luci is Bender, then Elfo is Fry.

A wide-eyed and impressionable elf from the elf world, now out in man’s world, he’s like Fry when he first awakes in the future in Futurama. Nat Faxon voices the character. You may know him as the voice of Raymond the Bear from The Cleveland Show. He’s also done smaller roles on Family Guy and American Dad! But I don’t think he’s a strong enough voice actor or has the comedic timing and inflection to voice one of the leads.

Off the top of my head, I can think of a few stronger candidates. Will Forte from The Last Man on Earth, who has also voiced characters on The Cleveland Show and American Dad!, could convey that kind of calm naivety through his voice and still give the right comedic inflection. Another SNL alum, Chris Parnell, (Jerry in Rick and Morty, also Cyril on Archer), can voice naive and flustered characters well. Olan Rogers, who voices Gary in Final Space, might also work. As a big fan of Critical Role, I would nominate resident funnyman Sam Riegel. With his talent and comedic timing, I could see him hitting just the right inflections. For instance, the word “love” from that trailer on Elfo you just saw.

Of course, the easiest choice is to have Billy West voice another role on the show. When the writers decided to have Elfo develop romantic feelings for Princess Bean, they mirrored the Fry and Leela relationship all too closely. Anyway, who better to voice unrequited love than Billy West, who voiced Fry… and Zap Brannigan. He also voiced The Professor, Dr. Zoidberg and a handful of other Futurama characters. He voices a handful of characters in Disenchantment, so he’s already in the recording booth.

As is, Elfo is kind of annoying. I don’t want to sound cold, but there’s a scene at the end of Episode 9 that reminded me of the ending of Disney’s The Black Cauldron. The hero must make a choice between what they really want and their goofy sidekick. Spoiler alert, the hero makes the kind of choice that I think should have been made in The Black Cauldron. The choice certainly doesn’t hold the kind of conflict or drama for this audience when the sidekick is so annoying. OK, end potential spoilers.

It’s too bad the writers went for the easy “will they, won’t they” romantic relationship between the friends. If they were platonic friends, then comparisons to Futurama might be somewhat more mitigated. If Bean was to become Elfo’s best friend, or better yet his wingman, then things could have become far more entertaining. Think of all the mythical creatures Elfo could become smitten with on their adventures. Luci would encourage Elfo to see him make a fool of himself. Bean would have his back. It would be an epic fail each time, but at least it would be less cringeworthy than watching Bean try to rebuff his romantic advances and keep Elfo in the friend zone.

Speaking of the object of Elfo’s affections…

Bean is a drunk. Not a funny drunk like Homer Simpson or Peter Griffin. Not an intelligent drunk like Rick Sanchez (Rick and Morty). Not even someone who could kick your butt after having a few like Turanga Leela (Futurama). No, Bean is like your typical drunk girl at a party.

She’s also overprivileged, selfish, condescending, a horrible person and kind of a waste of space. When she talks about how “selfish” her dad is, we all know she’s really talking about herself. Seriously, it’s like the writers forgot to give her any redeemable qualities. She’s not smart and clever like Nancy Botwin on Weeds, but more useless and emotionally manipulative like Piper Kerman on Orange Is The New Black. If she were bad at life, but good in a fight, like Buffy the Vampire Slayer, I could deal. If she were condescending while being smart, like Lisa Simpson, I could commiserate. But I spent more time sympathizing with her dad, the king, who has to deal with her fallout.

Yes, King Zog tries to marry her off to forge an alliance at the season’s beginning. But Princess Tiabeanie Mariabeanie De La Rochambeaux Drunkowitz (Bean) is not like Merida from Pixar’s Brave. She doesn’t want to stay single so she can go riding, shooting, adventuring and “touch the sky.” Princess Bean uses her free time to go out drinking each night, attempt to hook-up and make a spectacle of herself. If the first episode has shown us she was at least good at cards, that would have been something. But she was neither good at poker, nor the ensuing fight. I’m not saying she has to be a warrior princess like Xena, but is it too much to ask for Princess Bean to be good in a bar brawl?

Bean should have died multiple times during the series and is only saved by dumb luck or deus ex machina.

Unlike Jessica Jones, Bean is a drunk who can’t fend for herself. She can’t support herself either, as Episode 5 shows, when her dad cuts her off. The only kind of fighting Bean does is for gender politics. Bean is voiced by Abbi Jacobson of Broad City. Matt Goening has said about Disenchantment that, “If there are any overt politics, it’s that it’s got a definite feminist point of view.” Also, about Abbi Jacobson, that, “She ad-libbed some of the best lines, making the feminist bent to the show even more overt.”

Unfortunately, I don’t remember any of Bean’s lines really standing out. If you want strong feminist improv in a fantasy setting, watch Critical Role. Maybe they should have asked Marisha Ray to voice Bean.

Perhaps Matt Goening should do what fellow feminist, Dan Harmon, did for Season 3 of Rick and Morty and hire female writers until there was a gender-balanced writer’s room. Season 3 was hailed by many critics as the best season of Rick and Morty yet. And while I still like Season 1 the best, Season 3 did give us some great insight and character development for Summer and Beth. If you look at the writing credits for Disenchantment, you begin to see what might be the problem.

That’s not to say men can’t write strong female characters. Look at George R. R. Martin (Beauty and the Beast, Game of Thrones). However, Disenchantment is nothing like Game of Thrones… no matter how much voice actor John DiMaggio likens the two.

Aside from that, the writing just isn’t any good. At times, I felt like writers didn’t bother reading each other’s scripts for continuity. In Episode 7, Elfo lies about having a girlfriend and makes one up. It’s like the writers forgot about Kissy the Elf from Episode 1. Then, in Episode 10, the king has to make a tough decision and his adviser warns him that not choosing one will lead to war with a neighboring kingdom. Except that kingdom already declared war on Dreamland in Episode 6! It’s like the showrunners and continuity police were asleep at the wheel. But I set aside my disillusionment and disappointment and muddled through the entire series and yes, there is an after-credit sequence at the end of Episode 10.

By the way, Episode 10 is where things finally get interesting. It’s too bad we have to wait awhile for the next 10 episodes, of the 20 episode total, ordered by Netflix.