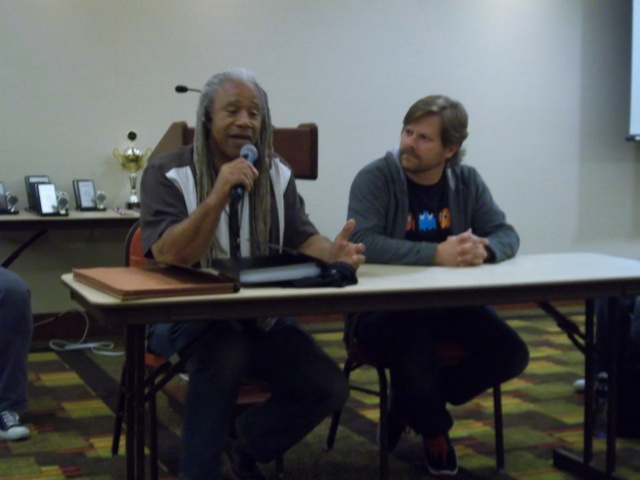 Per Matt
Dave Fennoy (Lee Everett) and Gavin Hammon (Kenny) voiced the main characters on Telltale Games’ The Walking Dead video game, and their work was paramount in helping it win more than 80 Game of the Year Awards. The actors recently attended ScoreCon 3 in Nashville, TN, discussing their work on the award-winning video game, possibly making an appearance in a sequel and possibly making an upcoming appearance at a convention near you…

How did you get into the video game business?
– Fennoy: “I had been a disk jockey in the Bay Area and got to the point where I thought, ‘One day, I don’t want to spin hits for teenyboppers.’ I started investigating voice-over as a career. One of the things that came my way, early in my career, were games. Over the course of a number of years, I have ended up on more than 60 games, then The Walking Dead came into my life. After having a very successful career, it’s only gotten better.”

– Hammon: “I was a former musician. I played in a punk-ska band in the 1990s. My band broke up in ’99 or 2000 and I was working in construction — literally digging a ditch — and my Dad called me, saying there was a woman on the radio who ran a voice-over school. I’d always enjoyed doing silly voices and accents as a kid. So, I turned the radio on, listened to it, called them and signed up for some classes. After about three or four years, I started working. A couple more years; started working full-time, mostly in the Bay Area. I do a lot of toys, video games and commercials.”

– Fennoy: “I had watched the show, but I wasn’t a regular viewer, when the script came to me. I was told I was replacing somebody and I did not have a lot of time to do a lot of research. I was aware of the graphic novel, but mostly I was told to keep it real. This was a regular guy, in a world gone mad.”

How different is this game from the rest?
– Hammon: “Telltale’s character descriptions are so robust. They’ve got links to three different movie clips, to guys who they’re like. They describe if there’s an accent, where they’re from, what a character does… It’s stuff you can grab onto. I’ve never had to cover the emotional range that Kenny goes through.”

– Fennoy: “The Walking Dead is a game for adults. This game is about relationships between people. It’s about story. It’s about making difficult choices. Because of the dialogue, and how emotional the game is, it has taken gaming a step further. That’s the reason the game has won more than 80 Game of the Year Awards. I was fortunate to be nominated for Vocal Performance in a Game four times (and actually got the trophy twice). This is one of the best all-around cast of voice actors I’ve ever been around.” 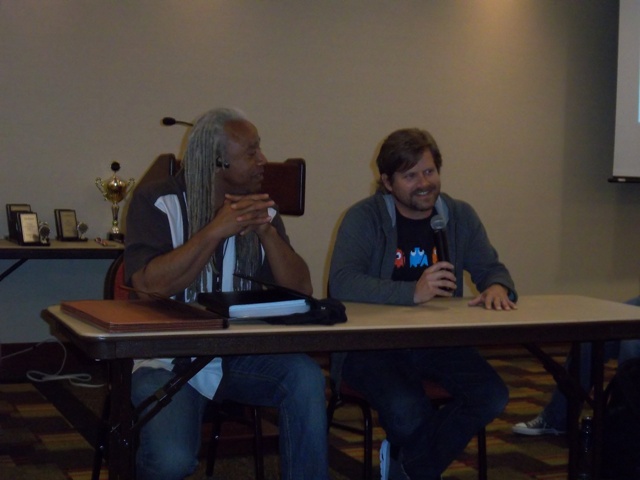 As your character, Kenny, were you ever told to just be a jerk?
– Hammon: “Yeah. You could tell, by the way they wrote the lines, and how you can make all these choices, that you’re mad at Lee. You can get the vibe for it, and plan accordingly. You don’t want everything to be middle of the road, because none of it really jumps off the page.”

With the open ending, were you told your character’s outcome?
– Hammon: “When I first recorded Episode Five, I died. I died a lot. I died painfully, I was torn to pieces, I was beaten up, all kinds of stuff. So, they have all this audio of me dying. And then I come back for a pick-up session and everything is really subdued. I’m not as angry. It’s like the same speech, but you don’t make the choices because they’re hard; you do it because you have to. It’s ambigous about what’s going to happen. Actually, at the wrap party, one of the directors came up to me and said, ‘I erased all of your death audio. I threw it all away.’ I told Jory Prum, the recordist, that, and he said, ‘Oh, no. It’s still there. I’ve got it on my hard drive. It’s on my server.'”

Do you see any new trends, with the success of this game?
– Hammon: “I haven’t been reading a lot of scripts lately, but the scripts seem the same. They don’t seem that different to me.”

– Fennoy: “Because of the amount of time it takes to build a game, I don’t think you’re actually going to see the effect of The Walking Dead has had on gaming for another several months, if not a year or so. Some games were probably already headed in that direction.”

Because of your great work, a sequel has already been announced.
– Hammon: “They’ve said they’re going to do a Season Two. They’ve also done casting for something that takes place after Season One, but is not Season Two, supposedly — which I have seen.”

– Fennoy: “It’s The Walking Dead, but with other characters.”

– Hammon: “I know they’re working on it and they’re also working on The Wolf Among Us, which is based on the Fables comic. They’ve announced that, as well. I’ll be in that, at some capacity.” 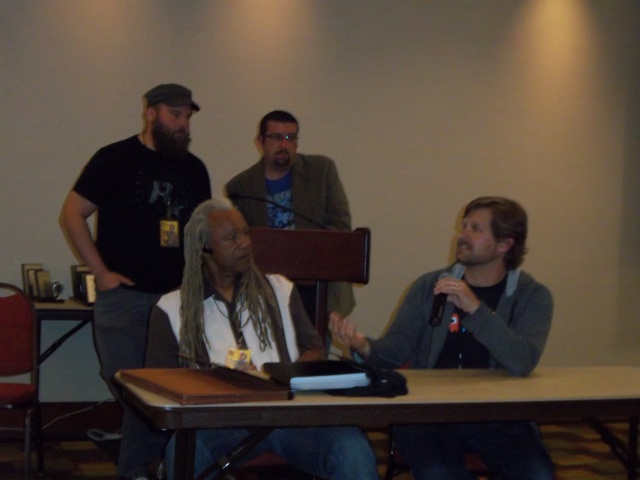 Is there any chance either of you will be in the next Walking Dead game?
– Hammon: “I have no idea if Kenny’s going to be in it.”

– Fennoy: “If I am, it can only be as a flashback. It could be interesting. I’ve had a number of people try to figure out how they can keep me alive.”

Because this takes place in the same Universe, any chance your characters show up on the AMC TV series?
– Fennoy: “I would love that, I’ve had fans make the suggestion, but I haven’t gotten a call from the casting director…”

– Hammon: “As far as I know, they’re supposedly in the same universe, but different universes. My understanding is that Lilly — my good friend Nikki Rapp — may show up on the show, but it’s not necessarily the same Lilly. It’s not clear.”

Will you be visiting any other conventions, in the near future?
– Fennoy: “Next month, I’m going to Sweden, I think, twice, for this game.”