Another year is over that was packed with tons of memorable television; some good, some bad, so it is time to take a look back on the year that was and pick out my standout moments. I can’t watch everything, as much as I would love to, so there are some series that I haven’t managed to get around to yet (most notably Atlanta and The People vs. OJ Simpson), but I did cram a lot of viewing into 2016. Let’s get to it!

Designated Survivor
This is a show that had an interesting premise and a great cast, but has managed to do nothing interesting with any of them. There’s been no real sense of internal consistency or real-life logic applied to the show. Sometimes, that is fine. But when your series is about the entirety of the U.S. government getting wiped out in a single night, you can’t have characters cracking jokes within 24 hours, or delve too deeply into personal political machinations until you’ve shown just how big of a disaster this would be. Rather, Designated Survivor likes to spin its wheels on unimportant subplots, like the true paternity of the new President’s son.

Lucifer
A procedural based on a comic book that has nothing to do with solving crimes should have been a disaster. But then the producers cast Tom Ellis as Lucifer, and that man has carried the entire series on his shoulders. Clever writing and endearing performances have taken what should have a been a throwaway, forgotten mid-season replacement and turned it into something special.

Outcast
The other Robert Kirkman show on TV, and the one no one is watching. Outcast is a fantastic story about the creeping horror that is slowly taking over a small town, and the two people (one righteous, the other… not so much) that stand in its way. Anchored with a tremendous supporting cast, including Brent Spiner and Reg E. Cathey, this is a show that deserves a much higher profile than it has been getting. See my review of the Pilot for more.

Supergirl
When Supergirl was on CBS, it was a perfectly acceptable adventure series. Nothing too deep, nothing particularly outlandish, maybe a bit mired in the Girl Power narrative, in lieu of plot advancement, but it was fine. Then, for Season 2, the show got to move to The CW. And do you know what The CW loves? Making comic book series that feel like comic books. Supergirl has soared in the new season, thanks to the ability to tell stories that involve tons of aliens, tons of weird technology and tons fun.

Mr. Robot
Let me begin by saying that Season 2 of Mr. Robot was still good television, but Season 1 of Mr. Robot was one of the best freshman seasons I have seen in years. A dip in quality was inevitable, but it felt like Season 2 took a dive off a cliff. Elliot was kept separate from the main action of the plot for more than half the season, and that played hell with the pacing, in addition to being kind of boring. Things began to pick up again in the last third, but even the finale kind of collapsed under its own ambition. 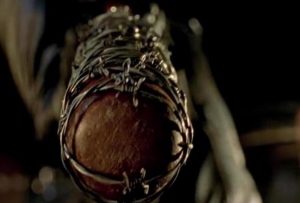 Don’t spend all season building up to a moment that you don’t show.  Don’t have your cast talk about how devastating the finale is and then not do anything. Jeffrey Dean Morgan is great as Negan. He’s the one person on The Walking Dead who has ever consistently had a smile on his face. But the showrunners robbed a pivotal moment of all of its power by jerking the audience around. And based on the ratings this season, the audience is tired of being jerked around.

“Hold the door.” — Game of Thrones 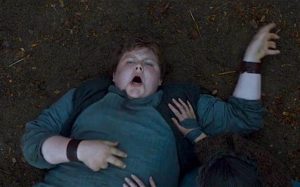 With those three words, Game of Thrones was no longer beholden to the novels of George R.R. Martin. The endgame is in motion. Characters will die at an accelerated pace, particularly beloved ones. This scene robbed the audience of the most gentle, innocent character on the show, while simultaneously opening the world to new possibilities. 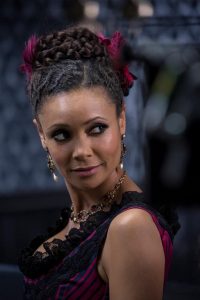 Thandie Newton is a revelation as Maeve. A robot with a tragic backstory (was there any other kind of robot in Westworld?), Maeve is slowly coming to the realization that the world around her is fabrication. This journey starts off as terrifying and slowly morphs into the most empowering storyline on the show, in no small part to Newton’s truly fearless performance. 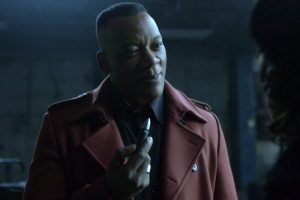 Luke Cage is filled with terrific characters. Misty Knight, Shades, Claire Temple. The best of those is probably the nuanced and layered performance of Mahershala Ali as Cottonmouth. When the show shifts gears halfway through the season, Ali’s performance is brushed aside for a bombastic, puzzling and downright strange performance from Erik LaRay Harvey. The quiet intensity that the series has settled into is overturned in favor of a character whose presence threatened to derail the entire show.

My Struggle II — The X-Files
The finale of the six-episode event series was showrunner Chris Carter engaging with his worst tendencies as a storyteller. An overwrought, confusing and ultimately pointless-feeling episode, My Struggle II literally left me with a massive headache after watching it.

Mulder and Scully Meet the Were-Monster — The X-Files
If the finale was The X-Files embracing its worst tendencies, then Mulder and Scully Meet the Were-Monster was the show embracing its best. A frightfully entertaining 45 minutes, delving too deep into the plot would be doing a disservice to people who haven’t seen it yet. Suffice it to say that this episode harkened back to classic episodes such as Bad Blood and Humbug. Surprising and hilarious.

Game of Thrones
Winter is here. Season 6 has set the table for the end of one of the most ambitious series in history. And what a glorious table setting it was. After a tremendous start by introducing Lyanna Stark (the previously unseen catalyst for… pretty much everything), Game of Thrones ended in a way previously unheard of… the good guys won. Ramsay Bolton is dead. Daeny is crossing the sea. The High Septon is gone. Robb Stark has been avenged. And it was all so, so satisfying.