The Slashening is a Killer Genre Parody 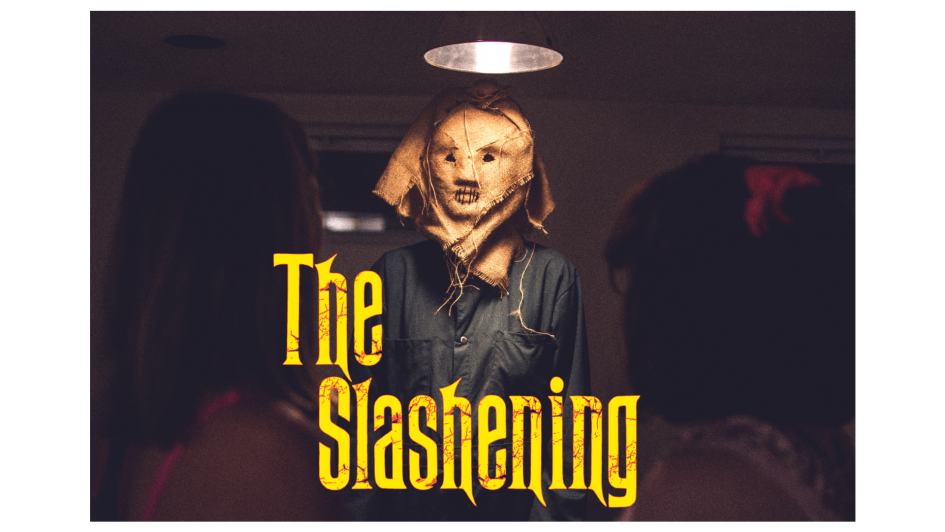 The Slashening is another raunchy and boisterous take on a horror subgenre from Troma Entertainment. The story follows five young women during a night get-together who are in peril of being slashed by a masked assailant. The plot seems like most slasher films, but delivers genuine laughs that fit seamlessly into each scene.

Of the five girls, Lucy is the prominent lead. She is set up to be a sympathetic character, due to the breakup with her boyfriend before the events of the plot take place. Of the remaining four, each can be defined by the role they take, which fits the roles of characters in most formulaic slasher movies. There’s the nerdy one, the promiscuous one, the responsible one and the druggie. They all live up to their character’s potential in various ways throughout the movie, playing up their personas to the extreme. Beth indulges in her anthill-sized pile of cocaine between every sentence of a scary story she’s telling, speaking more energetically after each hit. Ashley’s trope is struggling to find something in her sexual history that surprises her friends in a “never have I ever” type party game. For Eva, being the moderator between her friends’ qualms, is the brunt of her character. Even the supporting cast members have their simplistic traits that generate funny plot points. Billy and Pat are two guys who are invited over and are basically the converse of each other. The former is a smooth-talking cool guy, while the latter is a timid, nice guy who longs for the affection of Lucy. The greatest of all, however, is Officer Norris, who greets the women early with warnings of danger that quickly become apparent lines of questioning for his own malicious intent.

What is so great about The Slashening is that every single death is displayed with slapstick zeal. Before any of the main characters reach their fates, about a dozen pizza-delivery guys get their throats slashed in the exact same manner. They each walk up the driveway with their cheap, old ’90s style headphones blasting music, turn around because of something they hear, only to see the killer in front of them once they turn back. Every other character meets their demise in a way that fits each of their actions. Ashley, being garroted, goes unnoticed, because Billy mistakes her struggles for orgasms. Beth gets her head smashed into a mirror over and over again and can’t feel the pain, due to her coke binge. Pat’s end comes because he felt the need to be a white knight, and after his encounter with the killer, he still gets no respect or affection from the girls.

What really makes this movie work is how the actors and actresses pull off the humor. Probably the single funniest scene is Ashley’s seductive conversation with Billy, while Pat is sitting by as a third wheel. Her rant goes from playful flirting into wild sexual fantasies of being gangbanged in a matter of minutes, all with moans and gestures that leave almost nothing to the imagination.

Troma’s knack for making movies that don’t take themselves too seriously is invigorating, in a way. Many mainstream comedies try too hard to get laughs and don’t deliver half of what movies like The Slashening could. With a whole catalog of horror-parody movies, it’s difficult to see where they go next. Whatever it is will surely be gut-bustingly hilarious and definitively entertaining.