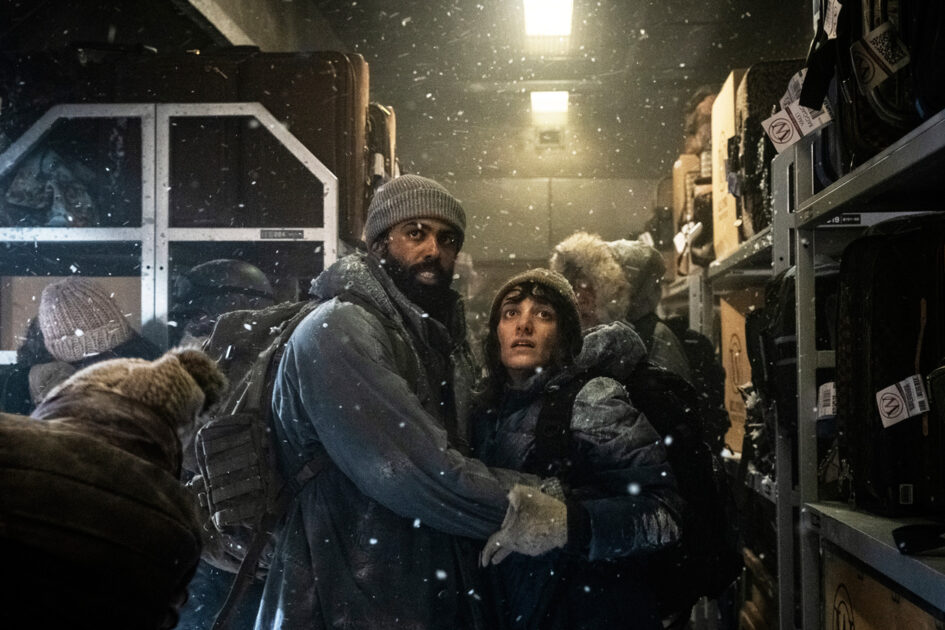 Sheila Vand and Daveed Diggs attempt to move on up, out of the cold, in TNT's Snowpiercer.

Even if the world’s become a frozen wasteland and the final threads holding humanity together lie within an always-moving train, people will continue to be the planet’s biggest monster. Class warfare, politics, privilege usurping justice and the struggles therein are explored in Season 1 of Turner Network Television’s adaptation of Snowpiercer.

Filmmaker Bong Joon Ho brings this small-screen version of his 2013 feature film to life, which itself was an adaptation of the titular graphic novel series, depicting a perpetually moving train with 1,001 cars that circles the globe (I’m not sure that’s even remotely possible) and the dirty little secrets that are kept from its passengers (entirely possible). If Snowpiercer stops, everyone dies. So, everyone aboard has a purpose, but they must get along… somehow.

“The needs of the train are more important than our own happiness. We’re engineers… we keep the world alive.”

Difficult choices need to be made by the authorities, as a revolution mounts from the back of the train (where the lowest class lives) and life-or-death scenarios depend upon moving up in class for food. The train’s creator and engineer, Mr. Wilford, has died and the truth is kept from the passengers. Hoping to keep everyone alive, Melanie Cavill (Jennifer Connelly) has inherited the highest rank of authority. As Andre Layton, Daveed Diggs is this world’s last-known detective, plucked out of the tail to solve the first murder aboard the train. Once that case is solved, the show’s focus changes practically on an episode-by-episode basis. It begins as a police procedural, then moves onto a political thriller with horror elements sprinkled about, to class warfare and the uprising that ensues. As a limited series, TNT’s Snowpiercer is literally all over map.

By the time the season finale concludes, Melanie has relinquished control, seven cars full of insufferables were released and a second train full of survivors is actually out there… What will happen once our train is boarded by these strangers? And who are these hacker pirates? Oh, and the train’s builder/engineer/creator, Mr. Wilford, has somehow survived! When will his truth finally get revealed?

Next season, as in the high-profile show has already been renewed and work is already underway by the network for Season 2. I was already a fan of Bong Joon Ho from his original Snowpiercer and most recently, when his latest film, Parasite won big at the Oscars. Add to the fact that Scott Derrickson was also involved with this series as a producer, so the horror elements seem to make sense.

“You crawled up out of the slime… and brought the truth with you.”

Choices have repercussions and the social injustice aspect seems especially relevant within today’s divisive political climate. The now-jettisoned first-class characters were so full of themselves, they were painful to watch. Those stereotypes molded the characters into the perfect type of antagonists. So, for next season, will the tables be turned on our heroes, as they will become the villains? Time will tell, along with the will of the people.

“Everyone believes they’re the center of the universe…”

The filmmakers involved did a pretty great job of holding my attention throughout each of the 10 episodes, and I was pleasantly surprised to see Steven Ogg surfacing as Pike (another somewhat evil supporting character), after getting written out of AMC’s adaptation of The Walking Dead.

I’m fully onboard for watching a second season, but I’m still unsure about Melanie’s backstory, which felt rushed and shoehorned into the final episode, in hopes of pulling viewers into the next season. While the TV show ventured into brave new directions from the feature film of the same name, both entities deal with similar subjects. I guess my only complaint was that the cliffhanger big reveal was the best story development of the year. Too bad it couldn’t have arrived sooner than later. Instead, the viewer had to wade through so much bickering drama. Oh, well. Bring on Season 2!