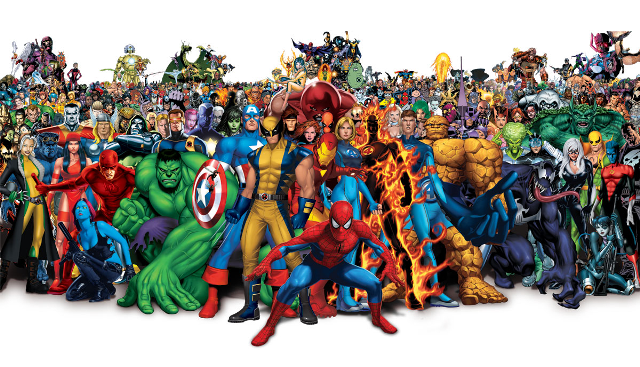 Spider-Man is swinging into the Marvel Cinematic Universe. This is a HUGE (caps on purpose) game-changing addition, mutually boosting Marvel and Sony’s motion picture storytelling options and potential revenue.

Spidey’s next solo film will be produced by Amy Pascal, former Co-Chairperson of Sony Pictures Entertainment, who ushered in the Spider-Man franchise 13 years ago, and Kevin Feige, Marvel Studios President of Production. This ensures that Marvel hands, well proven to spin gold out of lesser-known heroes like Iron Man and the Guardians of the Galaxy, will guide Sony to the same success. Marvel has crafted a shared-cinematic universe since 2008, a feat no other studio has done to this degree.

The ramifications of the Marvel-Sony collaboration were immediate. Within minutes of the announcement, Marvel shifted release dates of their 2017 and 2018 movies to prevent overlap on the release date for Sony’s next solo Spider-Man film, scheduled for July 28, 2017. Reportedly, the first appearance of Spidey in the Marvel Cinematic Universe will in Captain America: Civil War, projected for release May 6, 2016.

But what makes the addition of arguably Marvel’s most iconic character into the Cinematic Universe so important? The answer lies in how important Spider-Man is to the Marvel Universe and to society.

Why Spider-Man matters to the Marvel Universe?

Spider-Man has always been the everyman of the Marvel Universe. He fights crime on the street level with Daredevil or Power Man. He also fights planetary threats alongside the Fantastic Four and the Avengers — he’s been a member of both. All the while he is balancing his own adventures and a personal life. He is the webbing that connects the B- and C-list Marvel superheroes to the A-listers. And while he bridges the gap between the brawlers and the icons, Peter Parker is a genius that can keep up with visionaries like Tony Stark or Reed Richards.

Whether he’s fighting robbers in Forrest Hills, Queens or an armada of alien-invading Skrulls, comic readers identify with Spider-Man — the young, smart, shy, nerdy, powerless — who strive to uphold their great responsibility, but seemingly lack the great power to enforce it. He is youthful exuberance run wild. Peter Parker represents the balance of a social life, family life and duty to mankind. This aspect is described more eloquently in Meagon Danmore’s article on Comic Book Resources.com.

Spider-Man is also the first major masked hero in the Cinematic Universe. He is the mystery man who wears the mask to protect himself, his friends and his family. Daredevil will be premiering first in the MCU through the Netflix series in April 2015, but Spider-Man was one of the first Marvel Silver Age heroes with a secret identity. And this plays nicely into the premise of Civil War and the latest Captain America movie.

The fear of a tragedy caused by a super-powered threat prompts government registration of every super-powered individual of the Marvel Universe. The registration causes a rift between the ideals of freedom defended by Captain America against the need for public safety and good held by Tony Stark. In the middle is Peter Parker, Spider-Man, faced with what is right to protect humanity, and what is necessary in anonymity to protect his family.

I expect the first Marvel Cinematic introduction to Spider-Man will be the familiar Peter Parker. There is no need to elaborate on Peter’s well-known origin and backstory. The public will have had five movies to absorb the concept of Spider-Man, and two years to acknowledge the inclusion of a Spider-Man in a superhero-populated universe. Peter’s conflict with responsibility to the world and his family is so well known that he can play a secondary character to Cap and Iron Man, without upstaging them or the plot. The conflict and resolution can play nicely into Sony’s solo Spider-Man movie.

But this isn’t about Peter Parker as Spider-Man in the MCU. The franchise collaboration is about Miles Morales, too.

Marvel’s Secret Wars comic book crossover event makes no secret about bringing Miles Morales, the Ultimate Spider-Man, into the main Marvel Universe. Half Latino, half African-American, he is the future face of Spider-Man, but also the country. By the time of the 2017 solo-film release, Miles Morales will be more ingrained in the Marvel comic universe and also in pop culture in general. As of the writing of this article, Miles Morales is trending on Twitter. What better time to introduce not one, but two Spider-Men into the MCU?

Peter and Miles can both be Spider-Man. Comics have always shown that a hero’s name and identity is not mutually exclusive. There are multiple Green Lanterns. There are multiple Hawkeyes. There are multiple Flashes. Marvel has the opportunity to go big and introduce a multi-ethnic youthful Spidey and Classic Spidey to the public at large. There is no reason why current comic book continuity should not bleed over into cinematic continuity. BTW, I’m all for Donald Glover as motion-picture Miles Morales.

More and more, Marvel is relying on modern comic book storylines to populate their films. The Winter Soldier is from Captain America in 2005. The Infinity War — the underlying storyline in the films — stems from the 1991 Infinity Gauntlet series. While a reserve member of the Avengers, Spider-Man was a main character in the Avengers comic book since 2005. Why not incorporate ideas for 2015’s Secret Wars?

What effect will the Marvel-Sony deal have on the remaining non-Marvel movie licenses?

Who owns the license to what? 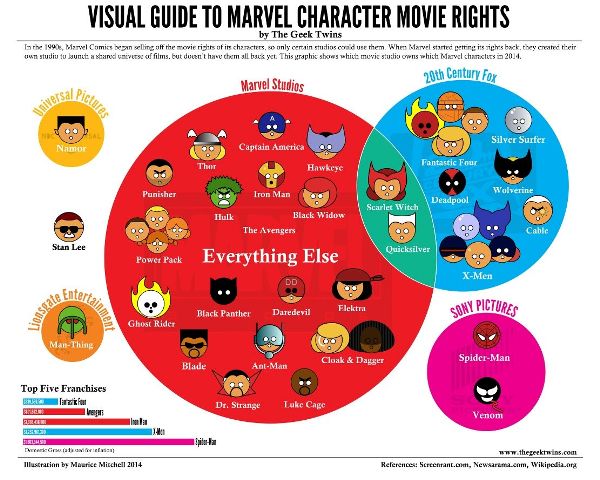 With the latest reboot of the Fantastic Four and the success of the X-Men franchise, Fox Studios could rest on their laurels and make millions. But mountains of money can coerce Fox to partner with Marvel in the same way Sony did.

Fox has X-Men: Apocalypse and a Gambit solo film in production (and PLEASE GOD, PLEASE, AN R-RATED DEADPOOL MOVIE). They will likely do well at the box office. I anticipate a war of box-office attrition between Marvel/Sony and Fox. Fox may have no choice but to collaborate with Marvel. One by one, the X-Men will enter the Marvel Cinematic Universe, starting with Wolverine, until it mirrors the Sony deal. The borders will blend, Quicksilver and the Scarlet Witch will regain their rightful birthright and the public will be closer to a Cinematic Universe that resembles the comic book universe. However, only time will tell.