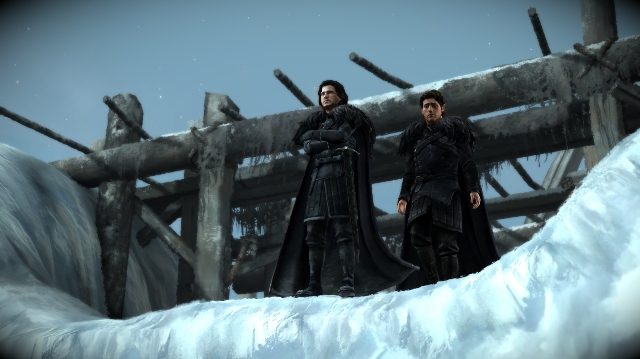 House Forrester struggles to survive through Ice and Fire in The Lost Lords.

Game of Thrones: Episode Two continues the adventure series by Telltale Games. This episodic video game is based on both the novels by George R. R. Martin (A Song of Ice and Fire), as well as the HBO television series of the same name.

After the events of the initial episode, Iron From Ice, Ironrath continues to helplessly spin out of control. With the unexpected death of the family’s patriarch, outsiders have attempted to take advantage of the house’s void in leadership, which could ultimately lead to its downfall.

In this episode, Player 1 controls three family members of House Forrester (Asher, Rodrik and Mira), along with the family’s squire, Gared Tuttle. Asher Forrester is the rebel of the group, currently living his life in exile, but hoping to return to his family one day. Rodrik Forrester is the first-born son of the family, believed to be slain alongside his father on the battlefield. Mira Forrester hopes to help her family while serving as handmaiden to Lady Margaery Tyrell, while Gared Tuttle trains to become a ranger with the Night’s Watch at The Wall. Together, they hope to survive a string of unfortunate events.

Needless to say, there’s a lot of interlocking pieces to this puzzle.

In part, this game is a family drama (who shall lead House Forrester?), political thriller (whoever holds the Ironwood shall control the battlefield), soap opera (an arranged marriage could save the day) and action movie (soldiers train for the ultimate battle). Episode Two sets up events that will surely take place by the end of the season. I can’t wait to see the outcome.

While Episode One had more exposition, The Lost Lords does a better job of constantly keeping the story moving and making progress toward the game’s climax and its ultimate resolution.

Lord Whitehill is clearly the main antagonist of this series, who uses his political clout and brute force to bully everyone within his path. As Master of Coin, Lord Tyrion (Peter Dinklage reprising his on-screen role) is incredibly likable, but since he enjoys playing both sides of every conflict against each other, I’m unsure which side he’s truly on.

I really enjoyed playing as the ne’er do well Asher and wish the entire season focused on his adventures with Beskha. But since the novels (as well as the TV series) focus on an ensemble-based storyline, this is clearly asking for too much. I will say I’m happy not to play as Ryon any more. His portion of the previous episode was unbearable.

Looking ahead, I can’t wait to find out more information about Castle Black. I foresee a future battle taking place at The Wall and look forward to more interaction with Jon Snow and Frostfinger there. I also look forward to finding out more about the Lost Legion, hoping the troops don’t ultimately capture (and kill) Asher, since he’s my favorite character of the series.

Just like the previous episode, all achievements and trophies are story-based and unmissable. For the second episode in a row, Telltale Games has created long chapters of Game of Thrones, which include about two hours of overall playtime. That’s a lot of gameplay per episode!

My only issue with this game happened during a quick-time event battle. In it, Player 1 must react quickly or die trying. During this fight scene, my screen froze a few times, resulting in my death. Maybe this happened because my Internet was running unusually slowly or perhaps it’s because I was playing the XBOX 360 version of the game. Either way, a quick replay of the scene was all I needed to resolve the previous problem.

As a whole, there are many secondary characters within this video game series. So many, it can be tough to remember their names (or the roles they play). Thankfully, the writers help you remember them via various conversations between the characters.

Overall, I enjoyed Episode Two more than the previous episode and I’m enjoying the direction where the series is headed. Episode Three can’t arrive soon enough!

Strength: Great storytelling with many intriguing characters.
Weakness: So many characters, it’s sometimes tough to remember who they are.
WTF Moment: Even the Game Over screen is cool, which provides an Easter Egg, as well: Valar Morghulis.

Notable Quotes:
– “May we drink, thieve and fight ’til the end.”
– “Who wants to dance on the end of my sword?”
– “I’d say you’ll get used to the cold… but you won’t.”
– “You clearly need a few days scrubbing the latrines.”
– “This stuff is weak when compared with Northern ale.”
– “Sooner or later, the Night’s Watch will be your death.”
– “I don’t need any more naked, fat men in my life, thank you.”
– “Ale. Goes in yellow. Comes out yellow. Waste of time, if you ask me.”