Star Trek had a big week.

Last week was the annual geek pilgrimage to San Diego for one of the largest conventions in the world: San Diego Comic-Con. Paramount Pictures planned to premiere the new Star Trek film, Star Trek Beyond, in the midst of all that excitement, and it paid off in a big way.

Beyond has been receiving terrific reviews and seems to have captured the hearts of Star Trek fans in a way that none of the “NuTrek” films managed that came before it. The film opened at No. 1, no small thanks to the massive marketing push that Paramount has put out in the last week or so.

The movie feels like Star Trek in a way that has largely been absent for more than a decade, while simultaneously functioning as a spectacular action film. I was right to be excited.

But Beyond wasn’t the only Star Trek at Comic-Con.

Say hello to the U.S.S. Discovery. 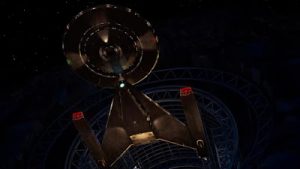 This is the ship at the heart of the new CBS All Access series, Star Trek: Discovery. Its design is apparently based on some classic sketches for an old, abandoned Trek project called “Planet of the Titans.” Although, to be honest, I don’t really care for it. But that’s OK, this is reportedly just a preliminary rendering. Hopefully it will feel better, once we really get to see it in action.

But the ship and title reveal were just the beginning. One of the biggest pieces of news was that the series will take place in the “Prime” timeline. This means that it will not have any connection to the current big-screen Trek adventures. I’m sure this news did a lot to win over a ton of disenfranchised fans.

Showrunner Bryan Fuller (Dead Like Me, Hannibal) had a lot to say about the new series, confirming that it would primarily utilize serialized storytelling. He also praised the general idea of Star Trek, hopefully putting to rest any lingering doubt about the new man behind the curtain.

“One of the most beautiful things about Star Trek is that you have people who see this show and they want to be scientists. They want to get into space. They want to make it to the future in one piece, and I think that is incredibly beautiful, because we do have to celebrate a progression of our species because right now it feels as though we need a little help, and there’s nothing like the guiding light that Gene Rodenberry hung in the sky.”

Star Trek: Discovery is set to debut on CBS All Access in 2017.