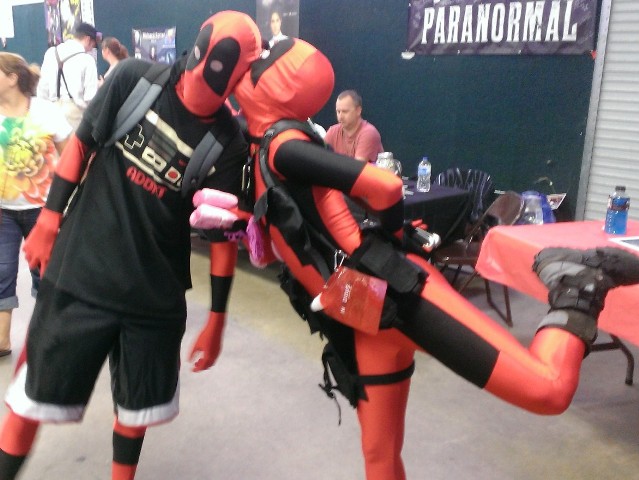 Per Matt
As part of the Red Eye Roadtrip, I carpooled with the Bev Nerd crew to Pensacola Para Con for a fun weekend! My entire roadtrip to and from Pensacola is an entire blur!

It all began on Friday night. On the road, while refueling, I came across this vicious attack dog, guarding his motorcycle (and owner). Note his special helmet and seatbelt! 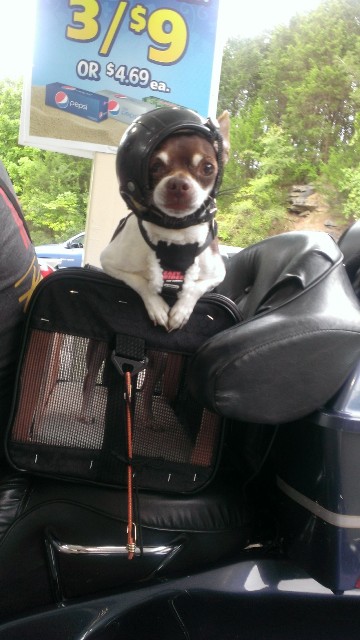 I met up with Jason Coleman around 8 pm. After a few setbacks, we filled the truck with energy drinks and beef jerky to the ceiling and we were eventually on the road. After a while, we were lost in the woods. Pulling onto on a road called Slasham Drive, we were one bad incident away from starring in our own horror film. We finally picked up Twitterless Andrew and were on the road. The drive was long and it rained a bit, but after arriving in Pensacola, we got four hours of sleep and some watered-down coffee, then onto the show!

We arrived at the show, set up our vendor booth, and the convention began! As we visited with attendees, Miss Pensacola arrived at our booth. I got a quick interview with her, where we discuss Dr. Who, participating with the Pensacola Roller Gurlz and Geek Culture. 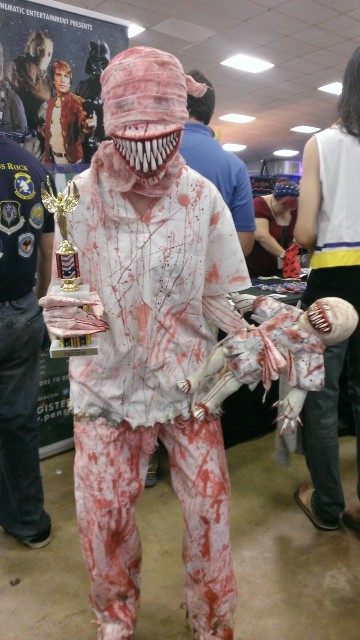 A huge costume contest broke out and many cosplayers appeared! There were some great contestants, but Tanya Hassell emerged as the Grand Prize Winner! As an employee of Carnival of Nightmares, her creation was eerie. It reminiscent of a Resident Evil enemy. I was cheering for her the whole time! 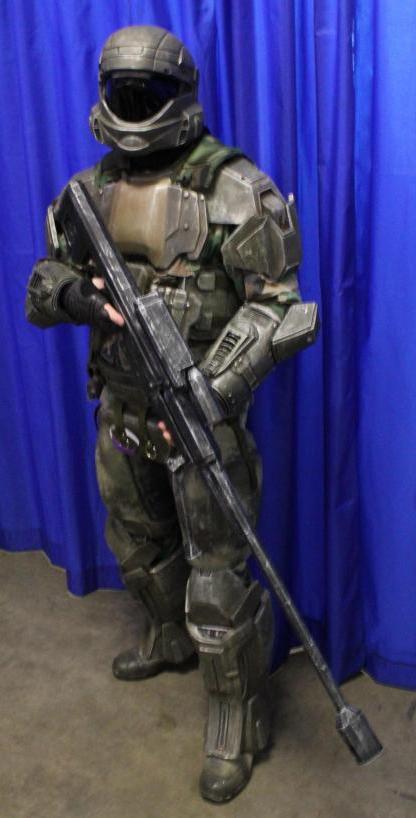 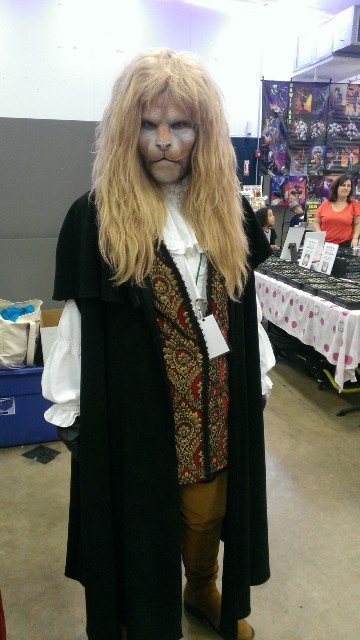 Afterward, I interviewed Chris Gostkowski of P.R.O.O.F. (Paranormal Research Organization of Florida) and Virginia “Red” Walters, who are putting on Paranormal Kicks Cancer 2013, which is a paranormal convention to benefit Base Camp, a Children’s Cancer Foundation.

The Pensacola Roller Gurlz visited for a bit, then the convention closed for the evening. We met up with the rollergirls for dinner at McGuire’s, where I attempted to eat the vaunted Terrible Garbage Burger Challenge. After that, I was so full, I could barely move and completely crashed. 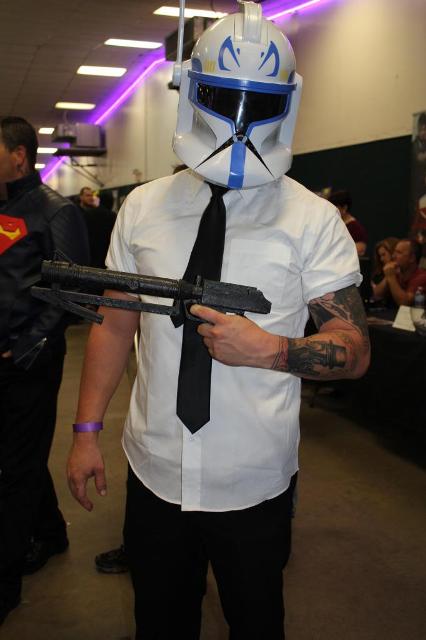 Sunday, I visited with my Clone Trooper friend. My man was DEFINITELY having a bad day! His armor was stuck at the laundromat and he had to march in casual attire. Every time I saw him, I started humming along to Daniel Powter’s “So You Had A Bad Day”… 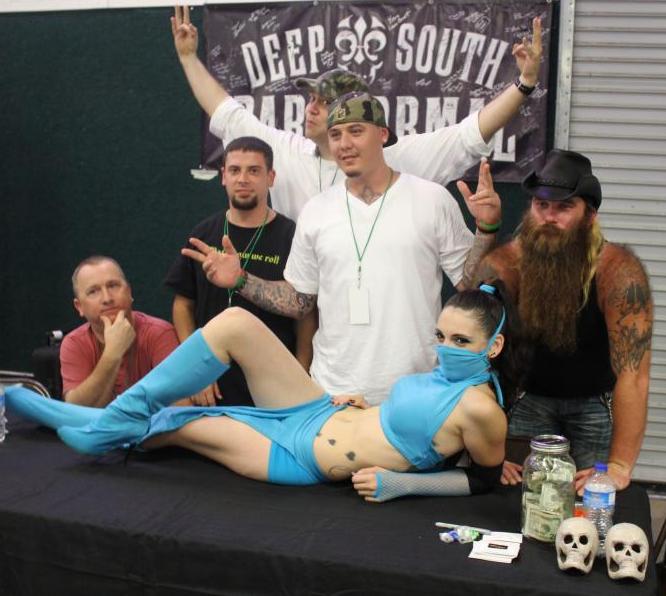 When I finally caught up with Kitana of Mortal Kombat, she was busy posing with the Deep South Paranormal crew!

we set up our booth with fewer products and I scored interviews with The Walking Dead actors (Triston Johnson and Addy Miller) and The Hospital actors (Scott Tepperman and Jim O’Rear). It was a full weekend. We did a lot of work and received invitations to appear at future conventions, including Pensacon 2014, which I really hope to attend! 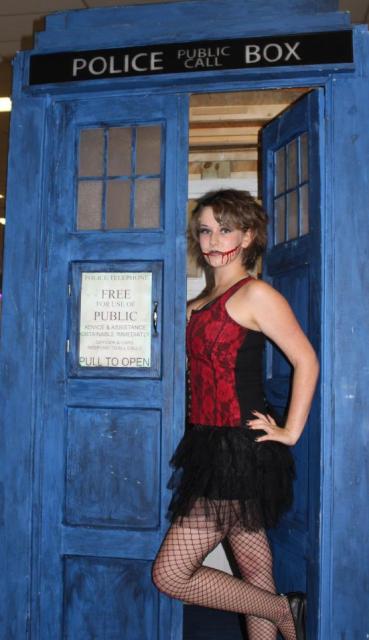 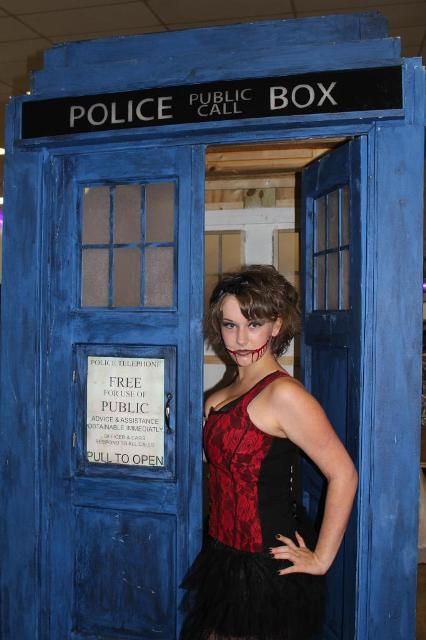 Miss Jessica Davison posed proper-like at the Tardis for a very nice photoshoot just before we left town. Thank you, Jessica!

During the roadtrip back, mandatory stops at Birmingham’s Whole Foods Store was fruitful, while Hop City was not.

I had a great weekend with the Bev Nerd crew. They made Pensacola Para Con an incredible weekend, even though it was a crazy Red Eye Roadtrip!