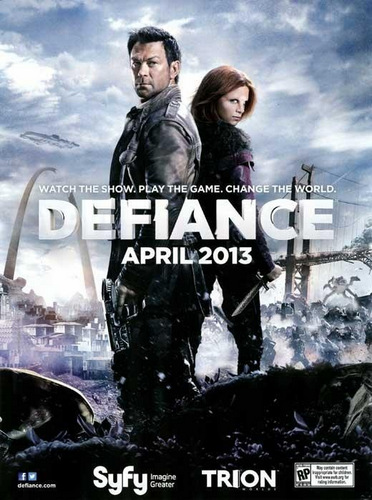 Survival is often difficult within Defiance. Even more difficult is the risky position of NBCUniversal and Trion Worlds.

The pairing of NBCUniversal’s most-expensive series, ever, with a MMORPG was a risky bet, to say the least. The $100 invested in the Syfy Channel’s 13-episode TV series and a partial investment in the neverending video game were released simultaneously. The creators of the open-world storyline hoped to entice fans of the TV series to purchase the game to explore themselves, although frequent server crashes paired with long lag times created glitches for the fanbase.

The storyline: 33 years after invading, an alien species terraformed Earth, making this planet livable for its creatures, while practically driving humanity extinct. Other than a sepia-hued landscape littered with massive destruction, this post-apocalyptic wasteland doesn’t look too different than today.

Its main characters are scavengers, trying to survive. They use a different vocabulary with new technology, and seek passage to Antarctica — supposedly the last hub of humanity — but other than that, they feel like generic people of today. And with no easily recognizable actors, speaking stunted dialog like, “You feel me?” there is more than bad acting that plagues the future civilations.

Defiance is more Firefly than Mad Max. Part Fight Club with a side of The Fifth Element. The storyline feels as if portions of its storyline and characters were taken piecemeal from other sources and crammed together. I love seeing the partially destroyed Gateway Arch, but the concept is one I’m uninterested in continuing.

I’m not really a fan of Syfy’s original series, but I am a fan of good science fiction and post-apocalyptic video games. This series should’ve been screaming for my attention. Unfortunately, I tuned out, even though Syfy finally put their money where their mouth is.