The Simpsons: An Uncensored, Unauthorized History 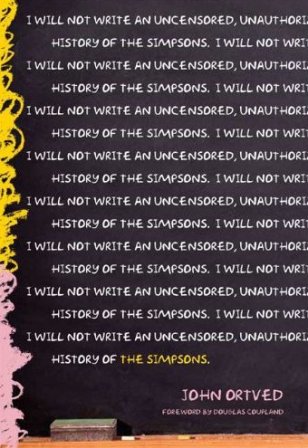 When a TV show becomes a pop-culture sensation, how does one chronicle its backstory?

If you’re John Ortved, you craft an oral history of the ground-breaking family of five and label it: The Simpsons: An Uncensored, Unauthorized History.

This book gives a detailed behind-the-scenes look at the creators of the TV show from its roots, as animated time-fillers on The Tracey Ullman Show to today, as a prime-time animated juggernaut. The show has been a ratings hit, won 23 Emmy awards, a Peabody award, named Time magazine’s best TV series of all time, has become the longest-running sitcom of all time, spawned a CD that cracked the Top Five of Billboard’s charts and created a vocabulary that was added to the pop-culture lexicon. Is it any wonder the writers and producers would have some great stories to tell?

Unfortunately, many of the show’s primary contributors refused to participate for this book. While a few people collaborated with the author, the book focuses on conception and development of The Simpsons from the very beginning, as told by current and past employees (sometimes anonymously), in their own words as an oral history. Their quotations come from multiple sources throughout the years, detailing their work on the show. Author John Ortved has done a ton of research, building the framework of this book. Peeling away the layers, he has showcased the highs and lows of the most vaunted job in Hollywood: The Simpsons Writer’s Room!

The book details many milestones during the show’s evolution, including:
– Different people’s claims for bringing Groening onto The Tracey Ullman Show
– Hurt feelings when animation companies are changed
– FOX not sharing royalties with the writers
– James L. Brooks’ temperamental mood swings, putting the “fun” into the Simpson’s dysfunctional family

A large portion of the book focuses on Sam Simon, the man responsible for assembling the legendary Simpsons writing room and extending the one-minute shorts into 30-minute episodes. He was a Hollywood genius, but was hard to work with, so he departed the series after its fourth season. Why does a showbiz genius have to be such a pain in the ass? The stories of Simon are incredibly intriguing and heartbreaking.

As The Simpsons become an overnight success story, another hot topic for debate was the fight for merchandising proceeds between the producers of The Tracey Ulman Show and James L. Brooks, which ultimately ended with hurt feelings and broken promises.

With the popularity of The Simpsons growing, Matt Groening received the majority of the show’s credit while the writer’s get almost none. This point is debated and disputed ad nauseum. The writers, and to some extent, the actors of the show both felt like they contributed more to The Simpsons’ success than Matt Groening, who mostly acted as the face of the show. Generally, he’d swing by to listen to the actor’s table reads, but his main job was developing merchandise for the show (rarely turning down a company’s offer).

The latter chapters debate the actual “golden age” of The Simpsons and the author determines which years the show began to age.

Author John Ortved tries to give an oral history of The Simpsons, but along the way, editorializes quite a bit, giving his opinion. While this doesn’t bother me, sometimes I actually agree with him. Nevertheless, it removes the objective role of the narrator and becomes an op-ed piece.

Simpsons Showrunner and Writer Mike Reiss disputes the book’s authenticity and claims the book is mean-spirited in our MomoCon Interview.

This book is dense with internal conflicts — which is eye-opening to the Hollywood outsider — and can be difficult to absorb, at times. Occasionally, but not often, an outsider to The Simpsons will be quoted. For example, Jacob Burch, administrator of NoHomers.net, discussed the cease-and-desist letters from FOX demanding unlicensed images or sound files be removed from fan sites throughout the years.

In picking up this book, I wanted to learn a bit more about the dark underbelly of the FOX animation beast. Taking the good with the bad, somewhere in between lies this book. Even if it’s only used as entertainment value, this book is sometimes a chore to read. Nevertheless, some of the better stories of the writers could be crafted into a stand-alone blockbuster movie!

Definitely recommended for the die-hard Simpsons fanatic, as well as those interested in pop-culture history.

Strength: Great behind-the-scenes drama.
Weakness: Inserts opinion into the “oral history” aspect of the book.
WTF Moment: Do the Bartman was cowritten and coproduced by Michael Jackson!

Notable Quotes:
– “Showrunners didn’t usually have families. There wasn’t any reason to go home.”
– “Every writer’s assistant I’ve ever worked with has gotten a big TV writing job.”
– “He loves funny, because funny makes you live through the pain.”
– “As a person, he’s a little messed up, but maybe that’s because he’s a genius.”
– “How is this a kid’s show? It’s one of the most intelligent things on television.”
– “Any show I’ve ever worked on, it turns me into a monster. I go crazy; I hate myself.”
– “Brooks and Groening make up only two-thirds of the holy trinity responsible for The Simpsons genesis.”
– “This concept of Matt as the creative driving force behind The Simpsons is just plain bullshit.”