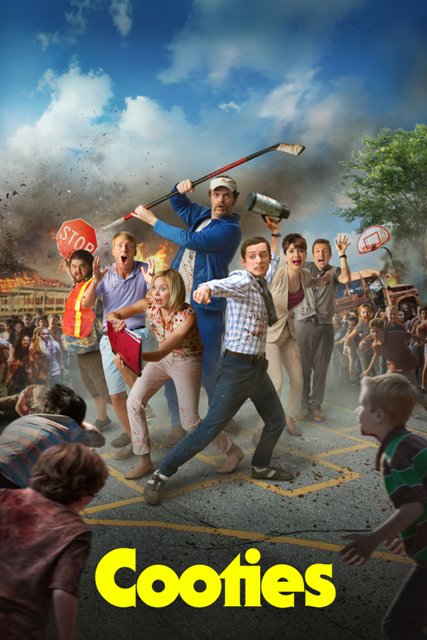 Cooties is an independent horror comedy about monstrous children, from the creators of Saw and Glee. (Just the pairing of those two Hollywood projects, alone, is one to surely send a shiver down your spine.) In this movie, Happy Poultry Farms has issued a health-advisory warning, which is a day late and a dollar short. Once an unsuspecting student gets infected from the food poisoning, she begins feeling the need to spread the disease. Within minutes, the majority of the school’s students have transformed into blood-thirsty Zombies. Basically, the highly contagious virus is only dangerous if you haven’t gone through puberty yet, so even though the adult teachers of this charter school may not be able to contract disease, they could still be killed by the hordes of killer kids.

Clint (played by Elijah Wood) is having a rough first day as a substitute teacher and that’s putting it lightly. Not only is the struggling writer trying to win over his students and make friends with his fellow teachers, but he also must deal with the undead threat. Once he and the other teachers figure out their situation, they huddle up, hoping to be rescued. But that plan is scrapped by the mandatory evacuation of the city, leaving no help for the trapped teachers. Will they live to see another day? It’s teachers vs. students in this elementary school of the undead.

Joining Wood in this battle for survival is Allison Pill (his high-school crush), Rainn Wilson (her ridiculous PE teacher boyfriend), Jorge Garcia (a hopped-up crossing guard) and Leigh Whannell (a creepy, delusional sex-ed teacher), among others. Together, their deadpan subtlety creates great laughs in the face of danger. Much like the Dead Rising video game series, the film’s protagonists create interesting combo weapons from everyday objects to fight the kids. Throughout the movie, only a couple of Zombies can analytically think, becoming alpha monsters, while the rest seem to be simply walkers. The storyline never mentions the reasoning for this, it’s just accepted by everyone involved.

Jorge Garcia’s role was criminally underwritten and Melissa Pills’ breakdown as an aggressive optimist was entertaining. Nitpicking a little, the character’s escape scenario involved using the air conditioning duct (an overused cliche), along with the Hollywood version of walkie talkies, where one person is allowed to interrupt the other (this can’t happen in real life). Overall, the movie has great production values and the rental version has tons of supplementary material, including the filmmaker’s commentary, a gag reel, deleted and extended scenes, a behind-the-scenes tour, along with an alternate ending. One of the funniest gags that didn’t make the movie involved Garcia talking to an alternate-reality version of himself, echoing a scene from the actor’s character in the TV show LOST.

Cooties is an infectious nugget of undead horror and comedy, hinting that children are an unwieldy bunch… even more so when they become Zombies.

Strength: Good balance of comedy and horror, fun storyline.
Weakness: A few plot holes and abandoned storylines do little to derail the movie.
WTF Moment: Rainn Wilson’s ad-lib is one of the funniest lines of dialogue in the movie. He calls Elijah Wood’s character a hobbit in a brief Lord of the Rings joke.

Notable Quotes:
– “Oh look, carnage.”
– “You can’t eat the teachers, man!”
– “Go for the face! It’s the weak spot!”
– “This is, like, the worst Monday, ever.”
– “I propose we create a symphony of death.”
– “This can’t be the end. I’m not even published yet!”
– “One of my students tried to eat another one’s face off. How’s your day going?”
– “After the fifth half-eaten corpse you see, it’s still horrifying, but somehow slightly less horrifying.”