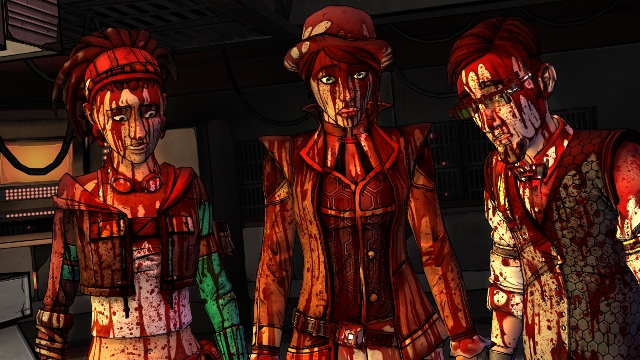 As the adventure begins, a pair of captured thieves retell two unlikely versions of one impossible story via flashbacks. For these anti-heroes, nothing ever winds up according to their plans.

In hopes of stealing a Vault Key on Pandora, both Rhys and Fiona become unlikely allies, along with their friends, Sasha and Vaughn. Trouble comes from every direction after they discover a mysterious map, whether it’s from raging wildlife, avenging death-race drivers, double-crossing bosses or pursuing bounty hunters.

Adding to the escapades, Rhys can interact with the hologram of his previously dead boss, Handsome Jack, whenever he hits his head (which houses stolen technology, sought by his former employer). Every time they appear onscreen, these two characters seem to always bring untimely humor to each situation. I totally approve.

Without spoiling too much, at one point, a main character must scoop out a dead general’s eyeball with a spork, in order to move the story along. I was expecting some sort of Quick Time Event mini-game, but it was gory enough. As gross as it sounds, I actually enjoyed it. After all is said and done, this is Pandora we’re dealing with, so there’s going to be some repercussions for our scrappy con artists.

Half-way through the episode, the guys and gals get separated once again, with their stories branching apart, as well. The gals repair their getaway vehicle and discover almost everybody on this planet has a double identity, while the guys uncover a hidden underground city and then get kidnapped.

Episode Two ends with a cliffhanger and according to my choices, a sure-fire disaster is waiting in the wings for Episode Three.

Tales from the Borderlands: Episode Two – Atlas Mugged is a point-and-click adventure that has lots of great tongue-in-cheek humor, features some awesome technology, uses super slow motion effectively during important scenes and highlights some VERY cool music by Jared Emerson-Johnson. I love the visual style and now that I’m familiar with the storyline, I can’t seem to get enough of it!

All of the achievements and trophies within Episode Two are story related. None of them are missable, which is perfect for this game. Just focus on the screen and have some fun!

Things I’m looking forward to experience in Episode Three: Catch a Ride… Uncovering the truth behind the Gortys Project, looking forward to more interaction with the moody Loader Bot, finding out what happens when the General comes to, discovering how hard Athena will retaliate as a stealthy ninja, and plotting the next moves of the treasure hunters, once they eventually escape from Vasquez, aka Wallethead.

I didn’t think it was possible, but Episode Two is actually better than the first episode! And the first one was practically perfect. With each new episode, Player 1 keeps getting into more trouble and I’m loving every minute of it. Somehow, Telltale Games keeps molding you, as Player 1, into caring for each of the main characters, even if they are anti-heroes. And with Hugo Vasquez featured prominently as Rhys’ ridiculous boss (voiced by Patrick Warburton, smacking of smarmy self importance) — who I love to hate — I almost wish they could pair up as an improbable team. But that could never happen. By the end of every story, the worst bad guy must always pay the price for his poor decisions. Looking forward to that.

I can’t wait to find out what happens next. Bring on Episode Three, already!