The Al Yankovic Story is Just as Weird as Its Subject 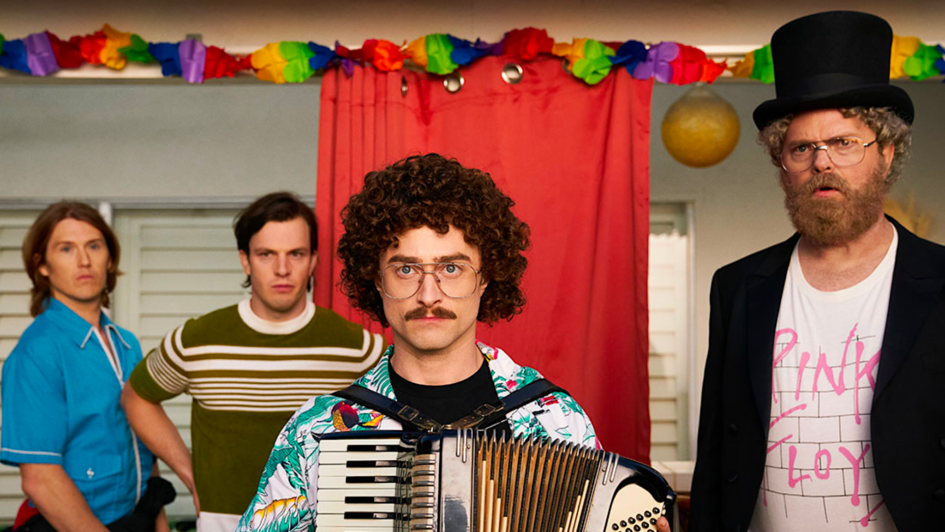 Who doesn’t love some “Weird Al” Yankovic? As I write this, I start thinking that I will get some social-media anger from the haters. (It’s inevitable, as a vast pool of people just has nothing better to do in life.) As a “weird” kid growing up, I took pride in my “Weird Al” collection of tapes and CDs.

I recall being at Sam Goody’s one night in 1994 with some friends and seeing my holy grail of music: Permanent Record: Al in the Box! I may not have been into polka, but you couldn’t tell by the way I cranked the speakers up to 11 for songs like, “Polka Your Eyes Out” and “Hooked on Polkas.” Yes… I was the King Nerd of my hometown.

But “Weird Al” Yankovic was better known for his parody songs. The guy could seemingly take any hit song and turn it into something fun. He turned “My Sharona” into “My Bologna,” “Bad” into “Fat,” and even “Smells Like Teen Spirit” into “Smells Like Nirvana.” As an untalented young man, I was in awe of the level of intellect a person like Al would need to convert a hit song into comedy gold that is just as memorable as the original.

I know that it is not like he came up with these instantaneously and without much work. Al and his teams worked hard to create these parodies. Even to this day, I still have tons of respect for anyone who can do this. I always wondered what a biography about him would look like.

And now, Roku has answered that question. Sorta.

Weird: The Al Yankovic Story shows Al growing up to become the musical genius he is today. However, it is told through Al’s own lens, giving him some artistic liberties, to say the least. Al is played by Daniel Radcliffe for the majority of the film, though Diedrich Bader provides his deep, manly voice as Narrator Al. The biography plays out much like one of Weird Al’s songs, portraying Al as a rock legend trying to win the approval of his verbally abusive father, Nick (Toby Huss).

Al falls in love with a young Madonna (Evan Rachel Wood), though she has her own selfish reasons for the relationship that may just lead to Al’s fall from grace in the music world. 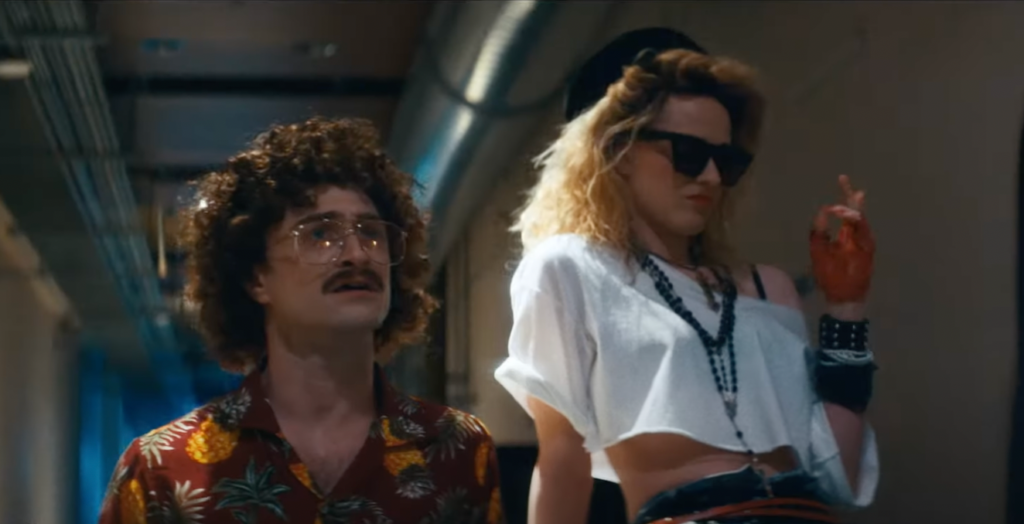 Weird: The Al Yankovic Story is chock-full of cameos. Rainn Wilson plays Dr. Demento, the radio jockey who helped get Al his break in the music industry. Thomas Lennon from Reno 911! fame makes an appearance as a door-to-door accordion salesman. Jack Black, Conan O’Brien and Will Forte take on the roles of Wolfman Jack, Andy Warhol and Ben Scotti respectively. Even Al, himself, takes on the second half of the Scotti Brothers, Tony.

I found myself playing the “OMG who is that in disguise?” game, where you try to figure out who that person on screen is, mainly ’cause you know they are probably famous in some way. I find the fact that, aside from some of the comedians I just mentioned, the director chose to cast actors and actresses known for dramatic roles. This blending of comedy and drama made this faux biopic feel twisted, in a good way.

When I first sat down to watch Weird, I had no idea that it was going to be alternate history, but it did not take long for me to figure out this was going to be something completely different. It is a parody of his life. And as a man who made his living parodying famous songs, this choice was perfection. From what I understand, Weird Al had a fake trailer for this film that played at his concerts since 2010. And after the success of recent biopics (like Bohemian Rhapsody and Rocketman), Al thought it would be fun to turn this into a full-fledged film.

Viewers can tell that Weird: The Al Yankovic Story is greatly influenced by these flicks, with a little Walk Hard thrown in for good measure.

Without a doubt, I have to give Weird: The Al Yankovic Story five out of five stars. This faux biopic is just as cheesy and corny as the main subject. Maybe this is a sign that Weird Al should possibly get into making parody movies. Can you imagine full-length versions of the shows we saw in the classic UHF film? It would make this fan’s dreams come true.

Make it happen, Mr. Yankovic. This fanboy implores you!