The End is Near for Preacher 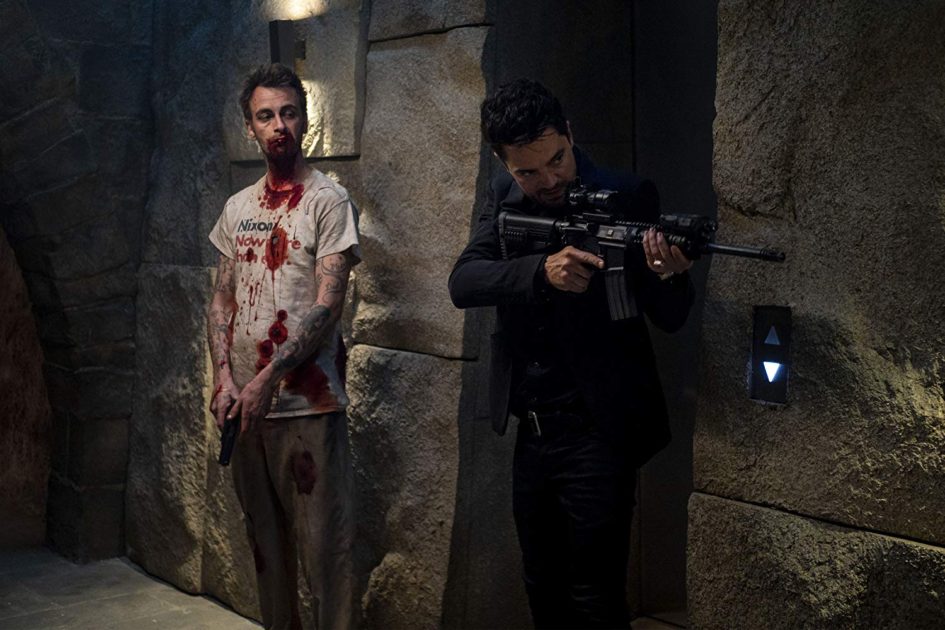 Whether it’s judgement day, doomsday or simply the Apocalypse, the end is near for Preacher. Figuratively and literally.

Jesse Custer and his crew have gotten themselves into trouble, yet again and God toys with the idea of starting Armageddon. Sadly, much like Legion, this is also the final season for Preacher, so you should expect balls-to-the-walls storylines getting even more ridiculous than Season 3. Is that even possible?

At the conclusion of last year’s events (Once Again, Preacher Defies Definition as a TV Show), Allfather’s dead, Humperdoo’s wandering out there somewhere and Herr Starr has captured Cassidy as a trap laid for Jesse and Tulip, so begins Season 4 as the pair attempt to find Cassidy in the two-episode season premiere, “Masada” and “Last Supper.”

In the process of getting rescued, Cassidy and Jesse just can’t get along, as the love triangle plot involving Tulip has unfortunately re-emerged, yet again. This leads to the two splitting up — once again — in a forced plot device that feels incredibly contrived. With only 10 episodes, total, for the final season, this feels like an incredibly redundant storyline that’s sole purpose is to waste time. Other noteworthy elements: Jesse’s on a mission to Australia (where this entire season was filmed, in fact), daddy issues arise as John Custer will seemingly play a role in the last chapter of the series and this season’s gonna be all about Jesse suffering, as he is literally, a tortured hero.

Tulip’s trying to do the right thing, Cassidy’s feeling guilt, Jesse’s feeling an obligation to help people, and so the side missions begin for our main characters. The Grail has been operating as a cult for 2,000-plus years, God’s in cahoots with Herr Starr and Diet Dr. Pepper is one of his greatest creations. It’s really funny that The Grail taskforce drive a fleet of Fiats.

Genesis didn’t make too many appearances last year, but now that Jesse’s soul is fully repaired, The Word’s presence is totally being felt. An extended torture scene is intended to remind the audience Cassidy’s wounds automatically rejuvenate and cult leader Herr loses an ear to go with his slightly scalped cranium in possibly the bloodiest season yet. God is vengeful and so are Jesse and Tulip.

I haven’t read too many graphic novels from Vertigo comics, but from what I’ve gathered, they featured intense, insane and downright ridiculous storylines involving violence, drug abuse, sexuality, profanity and other controversial subjects that mainstream publisher DC Comics couldn’t get away with, so the imprint was created. That’s about a spot-on description you’ll ever get for the TV series Preacher. If you can prepare for the unexpected, you’ll be right at home watching this show.

“You were tested and you have failed.”

Unfortunately, I really didn’t enjoy these two episodes. I’m not sure which filmmaker is more to blame, but as there’s only eight more remaining episodes until the series is complete, I’ll blame series executive producers Sam Catlin, Evan Goldberg and Seth Rogen for stretching out the paper-thin storyline for two hours.

Through two episodes, Adolf Hitler hasn’t made an appearance yet and Arseface only arrived for a cameo. The Saint of Killers is finally back onto Jesse’s trail and Archangel had a couple of throwaway lines of dialogue (he’s actually the father of Genesis, but apparently not super important). As crazy as it sounds, it’s the minor characters who seem to bring a lot of heart to the show. Too bad they were all an afterthought here. I’d really like them to get more screentime, but since the overall season’s storyline still hasn’t been stated, it felt like the writers of these episodes weren’t really focused, trying to feel out where the season will take the viewer. I can only assume they were high while putting together these two scripts. That’s exactly how it felt to watch them.

Here’s to hoping for some snappy writing, better direction and eventful upcoming episodes, because if they don’t arrive soon, this last season will have definitely gone to hell (and not in an entertaining way, either).