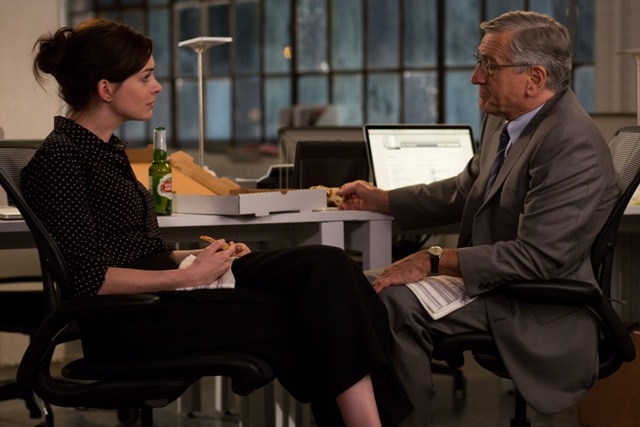 Per Matt
What happens when two Oscar-winning actors join forces to star in a workplace comedy?

The answer is The Intern.

When 70-year-old widower Ben Whittaker (played by Robert De Niro) applies for a community-outreach program at a trendy e-commerce company, he had no idea what he was getting himself into, he only knew he was tired of retirement. Although he feels out of place, his character is so eager to please his coworkers, he will do any task without complaint. Everyone loves him around the office except for his boss, Jules Ostin (Anne Hathaway), who finds him more as a distraction. As the founder and the CEO, she’s running herself ragged and the company is starting to show cracks at the seams. That is where the experience of Whittaker, and as an extension, De Niro, shines.

While he generally plays the straight man throughout the movie, De Niro’s no stranger to comedy. He creates lots of funny moments… sometimes with only a mere glance. In fact, it’s debatable who creates more laughs throughout the film: De Niro or young little Jojo Kushner. Both are great. One of the best scenes in the movie plays like a satire of an Ocean’s Eleven heist. Naturally, that means the joke’s on De Niro, who’s portrayed more than a few tough guys in his lengthy filmography. In The Intern, his character (as well as the actor) never lets the audience down. He also has good chemistry with Hathaway throughout the film.

As someone who has worked a couple of post-college internships, De Niro’s character was incredibly relatable (although I’m not quite in his AARP age bracket, just yet). I understood the awkwardness of Whittaker and his attitude for trying to fit in with everybody else, which isn’t usually an easy endeavor. Written and directed by Nancy Meyers, The Intern discusses the changing roles in society: From stay-at-home dads, to females breaking through the workforce glass ceiling and even former retirees returning to the work force.

One throwaway line of dialogue in Act I briefly mentions the company will be sued unless senior interns are brought in, but never really gets explained. Sometimes the storyline details (and its supporting characters) simply disappear, but there’s plenty of laughs to fill in the blanks.

Strength: Funny workplace comedy with great actors.
Weakness: The storyline sometimes gets dangerously thin with the details.
WTF Moment: Rene Russo steals every scene she shares with De Niro, in a supporting role.