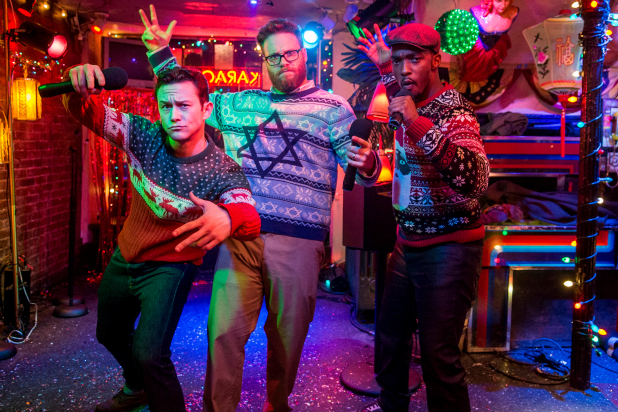 Per Matt
What happens when Falcon, Robin and The Green Hornet join forces with General Zod? You’ve got plenty of holiday-inspired shenanigans and a big-time party!

The Night Before features each of the actors who’ve previously portrayed these comic-book characters in past movies, together for the first time. Three childhood friends prepare for one last hurrah, before going their separate ways. Joseph Gordon-Levitt is the trio’s emotional core, who portrays Ethan. The parents of his character died on Christmas Eve and for 14 years, his two best friends have become his surrogate family. In addition to preparing for separation anxiety, he’s also pining after his ex-girlfriend, Diana (Lizzy Caplan). Anthony Mackie is Chris, a professional football player whose fame seems to be tugging himself away from his friends and family and Seth Rogan is Isaac, the only married member of the group, whose wife encourages him to enjoy one last night of revelry.

The holiday spirit really gets amped up when illicit drugs are involved. A series of mix-ups leads each of the main characters to reveal personal secrets that must be bared on this crazy night. Celebrity, sexting, selfies, social media and steroids are all briefly covered, but the main attraction of this movie is its depiction of ridiculousness, creating belly laughs and the surprisingly charming moments in between.

Michael Shannon’s subdued portrayal of Mr. Green was an amusing sight, but one of the funniest bits involved the character Rebecca Grinch (Ilana Glazer), a person who aspires to be a real-life Grinch, basing her character on previous big-screen bad guys. Unfortunately, she disappears half-way into the storyline (along with a hilarious pair of Bad Santas) before receiving her comeuppance. Those were two missed opportunities that could have led to comedy gold.

Is The Night Before a new holiday classic? Critics may complain that Rogen’s drug-induced man-child role gets a little repetitive, but his awkward, panicking goofiness leads to some really funny on-screen moments. This is definitely a holiday film that’s under the influence and destined for many basic-cable Christmas futures.

Notable Quotes:
– “She Home Alone’d me!”