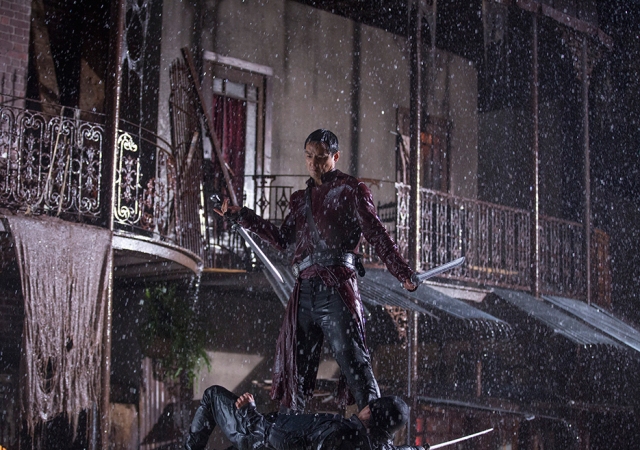 Into the Badlands offers a post-apocalyptic peek into a worn-down world ruled by martial arts.

This new TV series, which airs on AMC following The Walking Dead, features an environment where seven Barons hold complete power, everyone else in this storyline is either a slave or a heartless killer who protects the Baron’s interests, known as a Clipper. When the most powerful Baron, Quinn (played by Marton Csokas) — who looks more like a hipster than a feudal lord — feels threatened, he sends the Head Clipper, Sunny (Daniel Wu), to resolve all conflicts.

After bringing home a mysterious teenage nomad as a prisoner, Sunny quickly realizes there’s more than meets the eye to M. K. (Aramis Knight), who simply yearns to reunite with his mother and return home to Azra. Facing a crisis of his own, Sunny frees the kid and begins plotting his own escape when he discovers his secret girlfriend is pregnant, since regents are not allowed to have families (much like Jedi). As soon as Quinn realizes his prisoner has been released and that Sunny is having an affair with the town’s doctor, you can expect the off-with-his-head order as sure as the sun will rise.

It’s easy to predict that Sunny, M.K. and his pregnant girlfriend, Veil, will all be on the lam together in future episodes, hunted down by both Baron Quinn and his enemy, The Widow.

The pilot episode offered incredible scenery, costumes and combat, but only average acting. If not for a storyline full of cliches, along with the acting, the series premiere could have been spotless, but if you’re watching for the non-stop action, those previous elements shouldn’t prevent you from continuing to watch the show.

This intriguing new world showcases lots of action and unique weapons on display… but what’s the deal with the title-screen credits? They may look cool, but they’re totally unreadable. A jumbled screen full of illegible names isn’t usually a good way to introduce the audience to a new series. But since Season 1 will only have six episodes, there’s a good chance this multi-genre TV show won’t live a long enough life on basic cable to build an audience, anyway.

Strength: Nonstop action, great scenery and an intriguing new world.
Weakness: Average acting and a storyline full of cliches.
WTF Moment: In the cold intro, I saw a couple of “dead” bodies moving and breathing. So much for continuity.

Notable Quotes:
– “This world is built on blood. Nobody is innocent here.”