The Terminator Franchise Gets Rebooted (Yet Again) 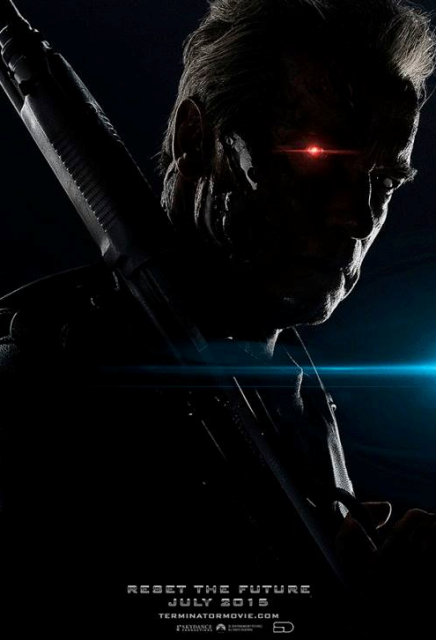 “If the past can change, then so can the future.”

So, does that mean the latest Terminator movie is headed toward the right direction? And is it any good?

For a while now, the Terminator franchise has gone through quite a power struggle, beginning with James Cameron’s departure. After Terminator 2: Judgement Day was released, legal troubles, screenplay rewrites and creative differences have plagued the series. Terminator 3: Rise of the Machines (produced by C-2 Pictures) was moderately successful, but Terminator Salvation (by The Halcyon Company) underwhelmed, so the film’s rights changed hands a few more times.

An unstoppable cyborg, autonomous robots, artificial intelligence, a spreading computer virus and the end of the world have all been featured as the films’ central themes, but the overall mythology seems to change as each subsequent sequel is released, creating continuity headaches for the audience and everyone involved. A variety of actors have portrayed good and bad characters (sometimes both simultaneously!), while the series’ timeline jumps back and forth, throughout the five films. The date of Judgement Day seems to constantly change, but it’s never totally avoided.

All of this, of course, leads up to the third reboot of the franchise: Terminator Genisys. The title of this movie is a clever play on words for yet another rewritten origin story. Thank goodness for Wikipedia to sort through it all!

As the film opens, a group of resistance fighters attempt to destroy the central core of Skynet, once and for all. Led by the battle-scarred John Connor (played by Jason Clarke), victory seems within reach until the troops realize their opposition has used a tactical time weapon to prevent this outcome. Loyal soldier Kyle Reese (Jai Courtney) volunteers to fight the machines, not knowing what he’s getting himself into.

Arriving in the Los Angeles of 1984, Reese vows to protect Sarah Connor (Emilia Clarke). Fighting alongside the cyborg of Arnold Schwarzenegger, Reese discovers she was orphaned at a young age as the result of an attempted assassination. Luckily, the arrival of her Guardian (Arnold, whom she nicknames Pops) saved her and continues to help her survive, but a new threat looms in the distance: An evolving killer app that threatens the end of the world!

Without giving away any spoilers, the group has only one path to travel and they’re humanity’s last hope. Needless to say, three different decades are explored, coinciding with multiple time jumps. This movie feels like the culmination of one million what-if scenarios, combining the ghosts of Christmas Past, Present and Future with a debatable unavoidable disaster.

Sometimes, actors are stereotyped into playing the same type of roles over and over, but the iconic characters of Terminator feel like they’re so prominent, seeing random actors portray them make the different films feel unrealistic without them. Several actors have portrayed Kyle Reese with varying effects, but take a look at every actor who has played John Connor since T2. The iconic character was unbearable as Nick Stahl and Christian Bale gave the ole college try, but was only slightly better. For Genisys, Jason Clarke’s character is simply boring. Maybe the fault lies somewhere between the different producers, screenwriters, directors and actors, but each one feels like they’re lacking a certain quality to be human race’s savior.

The smartest thing the previous sequels did was to kill off Sarah Connor, because Linda Hamilton owns that character. Here, the Dragon Mother herself, Daenerys Targaryen (Emilia Clarke), does her best, but really feels overwhelmed in her portrayal. She’s too petite, feels a little out of place and doesn’t have the biggest acting chops for this role.

The characters we used to know, who were the best part of the movies, are no longer there… with the exception of Arnold, who plays multiple cyborgs. Just like his dialogue, he’s old, but not obsolete and he’s the best part of the movie, even if he isn’t the main character. J.K. Simmons is a nice addition to the cast as a lunatic who pieces the story together of the time-travelling robots.

There’s some cool CGI special effects and lots of action, but the storyline seems to change quite a few times before it reaches its conclusion. That’s a problem and sometimes difficult to decode. Also, Judgement Day is always best when it’s an unavoidable event happening in the future. Its depiction always seems to be a letdown for this franchise.

Terminator Genisys is the fifth movie of the series and the first of a planned new trilogy, so don’t be surprised by the outcome of a mid-credits scene. The movie made more than $400 million from its worldwide box office (although only $80 million stateside), so the proposed sequels and spin-off TV show that was originally planned have all been placed on hold, for now. Maybe the filmmakers are actually waiting for Judgement Day to make the official decision for the franchise’s future, but it seems the U.S. audience has already grown tired of its never-ending dystopian depiction.

Strength: Arnold’s presence, plenty of robots and many action scenes.
Weakness: The storyline gives me a migraine, sometimes getting in the way of itself.
WTF Moment: An awesome family reunion of characters is depicted onscreen for the very first time, including John and Sarah Connor, Kyle Reese and the T-800.

Notable Quotes:
– “Time travel makes my head hurt.”
– “You won’t be needing any clothes.”
– “If we die tonight, mankind dies with us.”
– “We’re here to stop the end of the world.”
– “You are nothing but a relic from a deleted timeline.”
– “There is no fate but that which we make ourselves.”
– “I’m 14 rounds short of an acceptable success margin.”