The Two Popes Offers Hope for a Bright Future 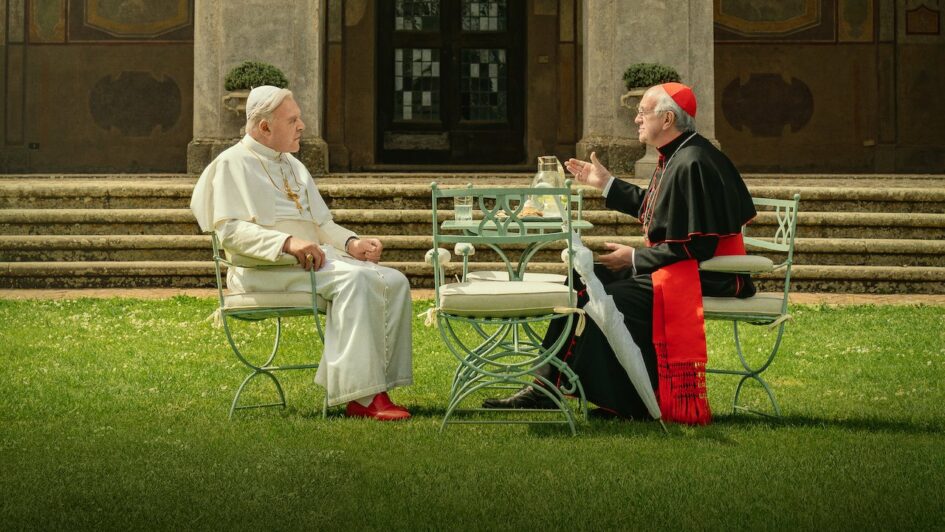 Per Matt
With Christmas decorations going back into storage and a new year just around the corner, I thought I’d take a moment to step away from the horror and pop-culture genres to reflect on a little movie called The Two Popes.

Released on Netflix, Popes goes into detail about a conversation between the soon-to-be-retiring head of the Catholic Church and his imminent replacement. What begins as a rivalry winds up becoming a very nice friendship that’s at times powerful and inspiring. This transition of power is one that millions of people around the world don’t take too lightly, and it’s also one that very likely did not ever happen. But that doesn’t mean the cinematic adaptation is any less poignant.

For years, the Catholic Church had been led by the conservative Pope Benedict XVI, who had been wearing down from it all, contemplating retirement, which had only happened once, ever. In comes the liberal Cardinal Jorge Bergoglio, who had previously lost the ultimate Vatican vote to Pope Benedict years before and he, too, felt like it was time to step down from his higher calling. That is, before he learns the position he previously yearned for was about to become vacant. In real life, Pope Benedict was dealing with the Vatican leaks scandal, as well as pedophile priests controversies, so a leadership change was definitely necessary. But maybe, in some sort of old-fashioned gesture, these two opposing forces actually looked past their differences in order to bring about a positive change for everyone involved…

As a self-described fanatic for biopics, I’m always more interested in the real-life aspects of big-screen adaptations than the parts that were made up with artistic license. In a sense, The Two Popes feels too good to be true. On one hand, you’ve got this rivalry of men who will never quite come eye-to-eye on any topic, whether it’s within the Catholic Church or not. And on the other hand, as a viewer, you want to believe the “watchdogs of the faith” won’t lead the masses down the wrong path, ultimately resolving their differences and making peace.

Sometimes, listening is the hardest thing to do, whether it’s a “spiritual hearing aid,” or just logic from a friend… or even an archbishop. We’re all looking for a sign that we’re doing the right thing in life — sometimes questioning our past life choices — and love has many faces, which is why I really felt like this film promoted hope for future generations.

Some sources have disputed the authenticity of this film, pointing out the current and future Popes only met once, albeit it very briefly, and much of what appears on screen has been speculated by Anthony McCarten’s 2017 play, The Pope, but director Fernando Meirelles felt the inspiration to make a movie about it, regardless of the credibility of its source material.

In the end, The Two Popes has an uplifting conclusion, even if reality is closer to a “What If” scenario. Actors Jonathan Pryce and Anthony Hopkins give strong performances, which have led to Best Supporting Actor, Best Actor, Best Screenplay and Best Motion Picture — Drama nominations at the upcoming 77th Golden Globe Awards. I wish the filmmakers good luck and a bright future for all mankind, as well.