The Walking Dead: 18 Miles Out 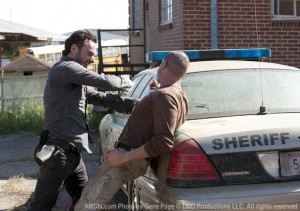 Spoilers Lie Herein!
I may be a little rusty at this, but I’m giving it the ol’ college try! Watching the first episode of The Walking Dead in almost a year feels awkward. Had my Tivo not crashed, I’d have the final four episodes of Season Two reviewed already. Alas, it was not meant to be. Starting this episode, I can honestly admit I can’t remember some of the character’s names. That’ll change very soon.

Rick finally gets the truth out of Shane. It’s about time. I still hate Shane. But I think I like him more than Rick. I have no idea why. That doesn’t even make any sense! But it’s about time they discussed conserving ammunition and food.

I’d totally forgotten who the blonde-haired girl was, lying in bed. I guess it’s beside the point… oh yeah, it’s Hershel’s daughter. An interchangeable background character, with thoughts of suicide bouncing about her head.

For this episode, we’ve made a pit-stop in the arm-pit of Georgia: Mert County. Never heard of it. Shane’s shaven head has grown on me (get it?), and he seems to emote a lot more, now that his hair is gone. And I see the characters are now tempting walkers with blood? Nice!

Lori’s the babysitter, now? I detest her the most! Someone order a Zed sandwich? Tasty! I love the behind-the-scenes interstitials! Keep ’em rolling, AMC!
The new evil is Andrea! Zombies seem to be easily killed with a knife to the brain. Seems the skull gets mushy once you die.

Episode Strength: Lotsa action! Lotsa violence!
Episode Weakness: Too much focus on background characters. Where’s Glenn?
WTF Moment: Suicide is finally discussed, seriously. And then we get the cop out. Pull the trigger, already!

Notable Quotes:
– “One of us wasn’t gonna make it out. It had to be him. The reality is… he had no business being here.”
– “You’re not gonna be dangerous. Not to me. Not anymore.”
– “Only when you love someone THIS much, can you hate ’em.”
– “The right choice is the one that keeps us alive!”