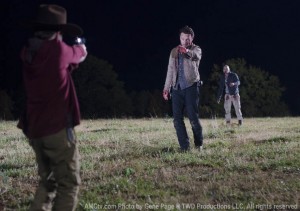 Slowly, but surely, all the original cast members are getting killed off, in preparation for Season Three and a new arrival of heroes and anti-heroes. Other than Merle, there really haven’t been any TRUE villians… yet.

Everyone’s preparing for the oncoming zombie masses. Shane has a great idea of creating a lookout point on an electric tower. I love this idea. I don’t know why it hadn’t dawned on the characters earlier, but I really like it. Can’t wait to see it as a lookout tower / sniper post.

Carl finally has permission to carry a gun. And all Second Amendment enthusiasts rejoice! This is easily foreshadowing, at its best. A possible problem, to say the least. Lori feels regret, apologizes to Shane. I blame her, for creating Shane into an even bigger monster than he originally was. They’re both bad. She’s worse.

Shane releases the prisoner, creating an all-out manhunt. When he’s found, it’s revealed that his neck was broken, but not bitten. So, how did he become a zombie? We now have a new way to become undead! Brilliant.

Whether it was necessary, or not, Shane is another casualty. I grew tired of the love triangle angle, but I loved his backstabbing ways. Carl pulls a gun on his Pop, and Shane becomes the undead with nary a bite. Carl shoots Shane (similar in the ways of Robert Kirkman’s comic book), and the noise attracts the attention of many lumbering walkers nearby (how were they so silent, to not be detected?).

Shane’s death was inevitable; one of the very few spoilers I’d already known about. Now there’s room for the ultimate evil, in Season Three… The Governor!

Episode Strength: Characters realistically mourning Dale’s death.
Episode Weakness: Quickly killing off Shane, as if it was holding up the series.
WTF Moment: After one shot, Carl is now a sharpshooter. How did he hit Shane directly in the forehead with no previous practice?

Notable Quotes:
– “He said this group is broken. The best way to honor him is to unbreak it.”
– “This is what’s happenin’. Swallow it. Move on.”
– “Dale appealed to the Better Angels of our nature.”
– “I run my mouth when I get nervous.”
– “There is still a way back from this. Nothing has happened here.”