The Walking Dead: The Bloodletting 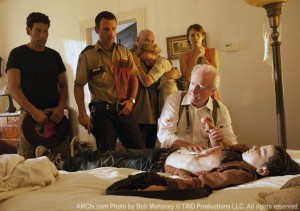 SPOILERS! SPOILERS! SPOILERS!
—————————–
With the second episode of the second season, we finally have the much-lobbied-for, Carl-centric arc. Rejoice. Not really. In fact, if ever there was one character which I would NOT like an entire episode devoted to, it would be Carl. He’s uninteresting. He’s a kid. He really doesn’t have much of a backstory. He hasn’t been alive long enough to develop one. Regardless, the show must go on.

I really dug how the intro juxtaposes the main characters while having major surgeries, first Rick then Carl, and fills in a couple of backstory blanks (which happened before the outbreak). I hope this isn’t a recurring theme, though, because highlighting character-centric flashbacks at the beginning of each episode will turn The Walking Dead into an exact replica of Lost. Let’s try to keep the show fresh, shall we?

Not a whole lot happens in the episode. Half the group is searching for missing child, Sophia. The rest of the gang is trying to get wounded-child Carl some medical attention. Oh, and finally, T-Dog gets a little attention (though still not too much)… how is he still alive after his bloodgushing arm is barely patched up? That tiny piece of fabric should be soaked with blood. No way the zombies aren’t attracted to that flesh wound. The episode gave some good backstory and introductions, but was a tad too slow. If it takes a McGuffin (like killing the annoying kid off the show just to move the storyline to Herschel’s Farm, then I’m all for it!) The bigger issue of the episode was never addressed: Which child is more important? The Lost Child in the Woods (Sophia)? Or The Bullett-Scarred, Bloodletting Child (Carl)? The Answer in the next episode!

Episode Strength:
Herschel’s Farm is introduced. Merle’s stash of drugs. T-Dog finally sheds light on the overall situation.
Episode Weakness: Glen had two lines of dialog. Glen is now a chauffer, not a main character.
WTF Moment: How is T-Dog still alive? At the least, he’d be passed out. At most, dead from the bloodletting (the Episode’s TITLE!) and/or blood poisoning.
Stereotype of the Episode: Damsel in Distress (Andrea), being chased by a zombie, trips and falls before being attacked.

Noteworthy Quotes:
– “All we’ve got left is each other… just hoping we can ride it out in peace, ’till there’s a cure.”
– “Why we on the side of the road like live bait?”