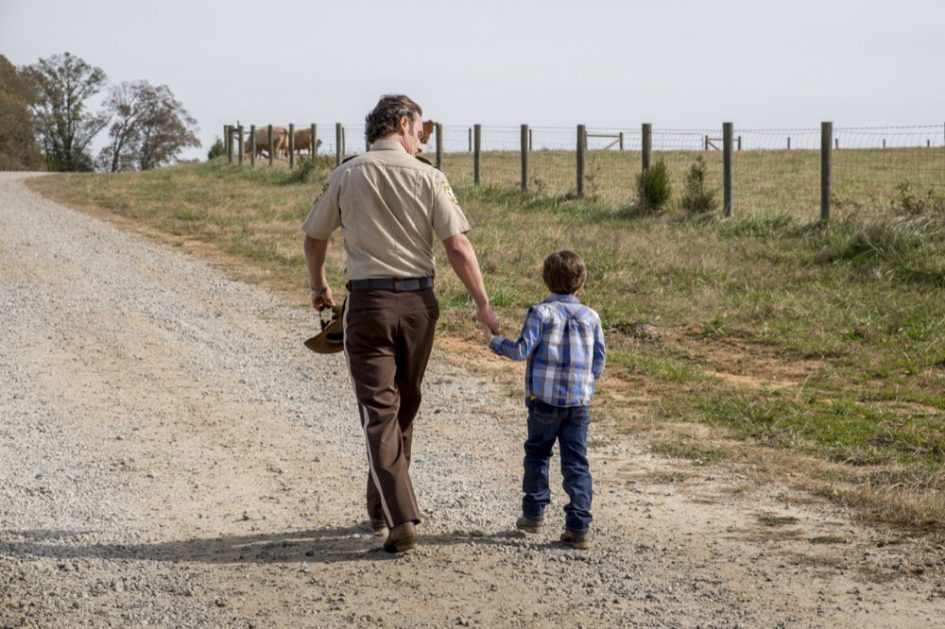 Andrew Lincoln and Chandler Riggs in The Walking Dead. © 2018 - AMC

With a meta title like that, it was finally about time to talk about the recent events of The Walking Dead.

If you haven’t been watching Season 8 of TWD, here’s a quick recap before discussing the season finale:

Robert Kirkman’s jumped ship. Carl’s dead. The Kingdom’s fallen. Alexandria’s burned down. The citizens of Hilltop have grown restless (and hopeless). Overall ratings are falling and viewer fatigue is at an all-time high with the TV show. Oh, and the All Out War against Negan and the Saviors is still going on…

The undead received a new nickname (“eaters”), The Scavengers were wiped out, Father Gabriel’s lost most of his vision, doubt is rising amongst the ranks of The Saviors, a missed helicopter ride at the landfill, Eugene receives his own outpost, then gets kidnapped, with so many people huddled together within one location, many of the characters disappear within the ranks, I didn’t even know Jesus or Ezekiel were at Hilltop until they awakened during a random walker attack…

Surprisingly, after a couple of ambushes and double-crosses, Negan was finally beaten. I mean, the battle’s been taking place for three years now, and so quickly has it come to an end. Now, Negan wasn’t killed, as Rick showed mercy, so how long can this truce actually last? Supposedly, the former man with the bat will get the opportunity to rot inside a cell, watching the two separate communities come together as a whole. All of this leads up to Morgan.

Back to being haunted by his own demons, Morgan watches people die (and supposedly can’t die), kind of the polar opposite to Carol, whom he says saves people. While he’s had some of the worst storylines on the show throughout the years, the character also seemingly chooses the weak way out of different situations. Now, he’s bailed on his friends, crossing over into sister series, Fear The Walking Dead.

All in all, this season finale felt underwhelming. Negan was defeated, but it didn’t feel epic. Seeds of a new world are planted, but there was no cliffhanger to stew over for the next six months, until the show returns from its hiatus. The only nugget that fans received was Maggie and her group (Jesus and Daryl) plotting to get their eventual revenge on Rick and Michonne for allowing Negan to live, instead of getting a final resolution for Glenn’s death. Will fan’s care enough to show their outrage?

“Wrath,” the Season 8 finale, was the least watched episode since Season 1. According to Deadline, only 7.9 million viewers tuned in, which was down more than 30 percent from last year’s finale and the worst since the first season’s finale, tallying 5.97 million watchers. That’s not a good sign for the season to come.

Since the season finale’s been covered, it’s time to get back onto topic. Many people have tuned out of TWD because of the human-vs.-human conflict instead of what brought them to the show in the first place: destroying the undead menace. Will a sliver of hope for humanity bring back the former legions of walker stalker fans? Here’s a bold prediction: New Showrunner Angela Kang will line up the next season to lure them all back. That doesn’t mean they’ll return. Maybe they’ll check out the season premiere, but TWD won’t return as a ratings behemoth next year. The viewers will return, if only briefly to scout out next year’s scenario.