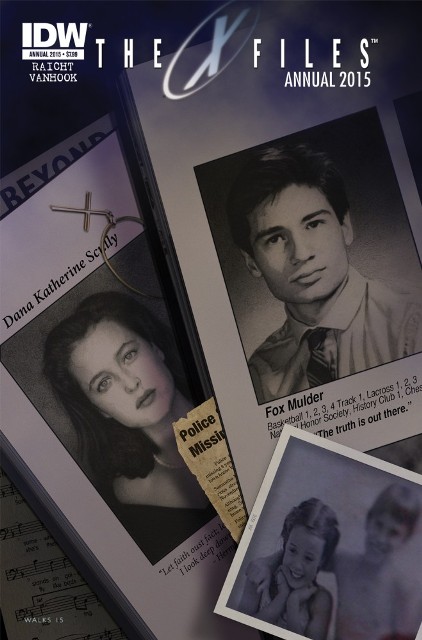 Season 10 winds down with one last unusual story of the year for IDW Publishing, involving everyone’s favorite paranormal detectives.

In The X-Files Annual 2015, readers are treated to a flashback story. Back in 1999, Mulder has conned Scully into attending a high-school reunion. But this is no school Mulder ever attended: It’s basically an event highlighting two local kids who became famous reality TV ghost hunters. If that doesn’t seem meta enough, just wait, it gets weirder.

Kelly McGreevy and Tristan Nolan of Ghost Encounter Survivors have seemingly banked their celebrity cache on the heels of their missing colleague, Colin Mathews. Naturally, Mulder believes in a possible murder cover-up, so he and Scully go undercover in hopes of discovering the truth. Little does he know he’d uncover a plot that involves a small-town outsider and multiple people with psionic powers!

Overall, the story’s plot is paper thin. Unfortunately, it’s stretched out to 40 pages in length, spanning the entire book. (In the previous Annual, two stories were included, justifying the price point.) Sadly, the reader must piece together the true significance of this investigation, which is only hinted at and never fully explained: Mulder tries to solve one missing-persons case every year, on the anniversary of his sister’s abduction. Don’t bury the lead, guys. Writer Michael Raicht tries to keep it spooky, but sadly, this story’s not worth $7.99. Has IDW already run out of ideas for this series?

Padding out the book isn’t a couple of pages used to promote the first issue of the upcoming series, Season 11, but eight pages! That’s almost one-fourth of the book! It may as well be half of the soon-to-be-released issue! More storyline unfolds in this black-and-white sneak preview than the entire previous 40-page story. And after reading it, I’m not too keen on continuing with this series.

While IDW deserves credit for attempting to update the once-popular hit TV series, the characters of Fox Mulder and Dana Scully have never quite been portrayed accurately. The language they speak and the actions they do always seem to feel out of character. In fact, in the 2015 Annual, Mulder utters the words, “I never do anything halfway,” which he has never once spoken or remotely hinted at in nine seasons on The X-Files. So, when he does so on the second page of the book, you know this story is going to be outside the realm of believability, even for his character. I truly question the involvement of series creator Chris Carter with this comic book franchise. While he may have mentioned some ideas for where to take the characters, I don’t think he ever read one finished script.

With the upcoming event series airing on FOX next year, in 2016, The X-Files will finally officially be dragged, kicking and screaming, back into the pop-culture consciousness. But with that, will these IDW adventures still be considered canon and pale in comparison? Original stories like Year Zero prove that the franchise has a bright future. Stories like this one make this comic series feel like it’s wasted away. This annual just isn’t worth it. At the moment, I’m afraid the entire comic series isn’t worth reading, either.

Strength: Paranormal detectives investigating ghost hunters sounds like a good idea.
Weakness: Slow-progressing story is an X-File in name only. Scully has nothing to do.
WTF Moment: A mind is a terrible thing to waste.

Notable Quotes:
– “Not everything involves weirdness.”
– “I didn’t save anyone. I found out the truth.”
– “Those glasses won’t keep me from socking you if this turns sideways.”
– “For once, you don’t believe in a ghost story being the answer, correct?”
– “This place looks like a cross between a carnival and some demented high-school haunted house.”