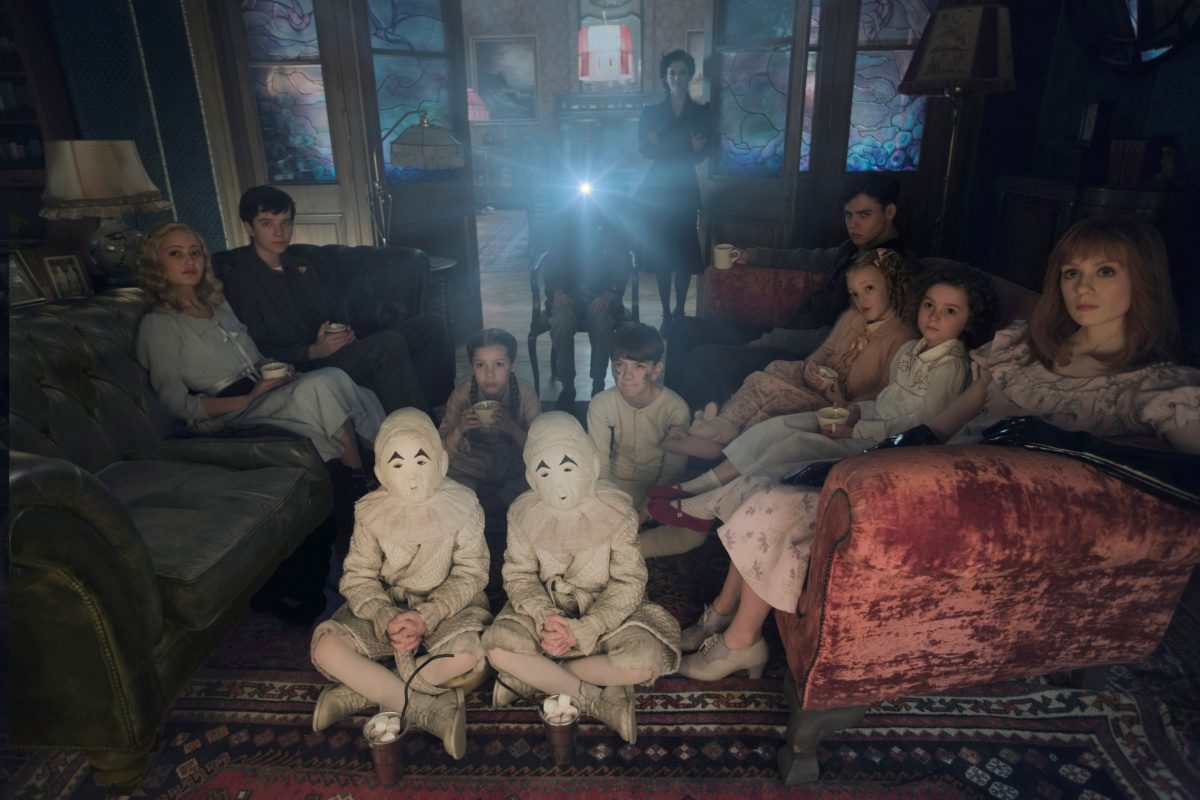 Per Matt
Describing a beloved book of the Miss P trilogy to someone new to the material can be quite daunting. A story about time-traveling mutants hiding from monsters during World War II may sound bizarre, but it’s only a general outline and a slice of the overall storyline.
Miss Peregrine’s Home For Peculiar Children is the first novel of the Quirk Books trilogy, one which feels tailor-made specifically for Tim Burton’s big-screen adventures. Written by Ransom Riggs and featuring odd, otherworldly vintage photographs, this scary fairy tale about children with strange abilities quickly became a bestseller. Back in 2013, when we reviewed the book, we thought the creepy-cool director would be first and only choice to bring the misadventures of Jacob Portman to life, but you should always be careful what you wish for.

Throughout the years, we have reviewed quite a few great novels via the Quirk Books Blogging Initiative. Pride and Prejudice and Zombies was very influential for us and Book One of Miss P franchise (as fans have nicknamed it) was a close second. Not only did I relate to the main character (played onscreen by Asa Butterfield) bonding with his grandfather in earlier years, yearning to learn more about him as he grew up, but I really felt Riggs’ story touched home for me in a meaningful way. I saw myself walking around in Jake’s shoes as a teenager, which is the main reason it is one of my all-time favorite novels released by Quirk Books.

The big-screen version showcases incredible imagery and creative special effects, but the main storyline suffers from a few changes made by Burton and company in order to “improve” upon the script. A couple of the Peculiars trade their strange abilities, a new villain is created specifically to put a face on the most powerful bad guy in the story and the movie follows the main beats of the novel very closely for about two-thirds of the film. Then, for reasons only known to Burton and company, the entire third act was rewritten. This is when the shark was jumped. At that point, the fantastic elements are increased by 100 percent and the climax felt totally corny. Employing familiar elements from his past movies, there was so much Tim Burton on the screen at one time (including a cameo by the film’s director and producer), it felt like lazy filmmaking. “Let’s throw all these different elements onto the screen, simultaneously, since they were successful in my past movies, but let’s not worry about creating a cohesive story. That’ll work itself out in editing…” Surely that dialog was spoken by Burton, himself, in defense for the last third of the movie that happened to out-Burton Tim Burton, in a very bad way.

The vintage photographs, which play huge roles within the novel’s primary storyline, felt devalued on the big screen, while two of the lesser elements of the book were methodically captured, from the page to the screen. Jake’s parents (including Kim Dickens of Fear the Walking Dead fame, in a familiar role) are incredibly unlikable and out-of-touch with their son. Unfortunately, the film is slow to start, due to its primary focus on them, which was a waste of time. The other oddity from the book captured onscreen was the romance between the two main characters. In the book, it is revealed that Jake’s grandfather had a relationship with a young lady who never aged… who Jake later romances. This very creepy element is incredibly toned down in the movie, but it’s easy to read between the lines.

Overall, two-thirds of the movie is incredible and impressive. Casting Director Susie Figgis did an exceptional job reeling in Dame Judi Dench, Terence Stamp, Samuel L. Jackson, Eva Green, Rupert Everett, Allison Janey and Chris O’Dowd, along with many great first-time child actors. The film builds upon the novel’s storyline while employing Burton’s strengths, before the goodwill of the audience hits a wall as the director trips over himself in an attempt to create a better visual storytelling experience. How peculiar nobody could have predicted this outcome. I guess we’ll stick around for a sequel (if one is ever made), but I’ll always hope for a true adaptation to the very meaningful and incredible book.