It’s Time to Give Preacher The Chance It Deserves

AMC’s Preacher has unfortunately languished in relative obscurity. I confess that this has been a constant source of consternation and confusion for me. The TV show is backed and produced by Seth Rogan. Its source material is one of the more famous and influential graphic novels of all time (Stephen King cited it as an inspiration for his Dark Tower books). AMC was relatively free of other obsession-prone shows while Preacher was airing its first season. Our current cultural and media climate seems almost too perfect for a good adaptation of the absurd, uber-violent and sometimes campy graphic novel. More than this, however, I’m annoyed that the show hasn’t taken off like it should’ve because, well, the show is damn good.

I have to wonder if sometimes we take ourselves too seriously. I also often wonder if we’re too trivial and flippant. Does that seem contradictory? I don’t mind. I am, frankly, a little tired of not being able to accept the contradictory nature of a good story. Every story now has to be either an ultra-gritty, realistic, humorless enterprise (e.g. The Walking Dead, The Handmaid’s Tale, Logan, etc.) or a meta-aware, satire-laden, drama-free joke of a story (e.g. Deadpool, One-Punch Man). This odd focus of aesthetics in drama and comedy doesn’t necessarily make for bad films. It does make Preacher a refreshing and enjoyable show to watch. The first season of the show wasn’t afraid to ask deep, troubling questions about faith and God, and in the same breath mock the very idea of such questions in a show with a vampire sidekick and a teenage boy named Arseface. 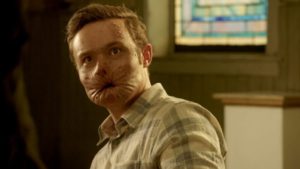 Preacher is original, not just because it is unafraid to inject some apropos humor into any given situation while maintaining its dramatic elements; Preacher does almost everything right. It incorporates fantastic action set pieces and camerawork reminiscent of Guy Ritchie, if he was a really big Buffy fan. The acting is fantastic, or at least it is from the main trio of Dominic Cooper, Ruth Negga and Joe Gilgun. Truthfully, the only reason I can think as to why this show hasn’t blown up is because the first season, at times, tends to sort of meander, and there simply isn’t much time for that in a season with only 10 episodes. I suppose it is important to remember that the first season of Preacher is a prequel to the comics. This is actually good news.

Why is this good news? Let’s put it this way: If you loved the insane action sequences and oddball characters in the first season, but got kind of bored with the titular character doing his job (by that I mean preaching) and figuring out what to do with his power but not really using it, then I imagine the second season will be for you. Season 1 set it all up, and I can only hope that Season 2 will knock it all down, hopefully in glorious, gory detail.

So, watch the first season or don’t. Read the comic or skip it entirely. Whatever you do, just make sure to tune in on June 25th, when the second season premiere airs. You’ll probably have no idea what’s going on, but the show will be all the more fun for that.