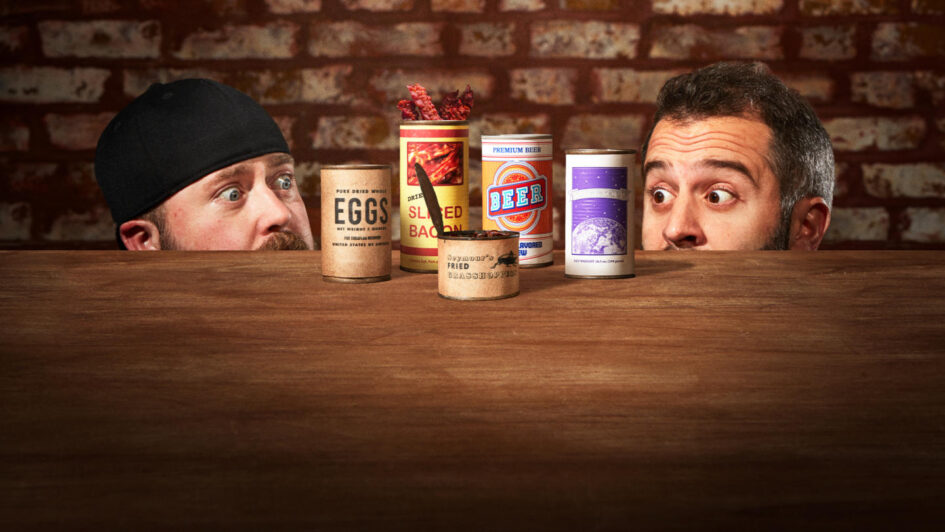 Per Matt
It seems that time travel is actually real! A new television series, Eating History, actually takes viewers back in time as the two hosts attempt to eat the oldest and most shocking foods, drinks and condiments that are still seemingly in one piece, somehow surviving much longer than their expected shelf lives.

Pairing food expert Old Smokey and collector Josh Macuga to not only inform but to entertain the audience is a successful transaction. The show is part history lesson, part food show and all comedy, taking viewers on a nostalgic trip down memory lane. History Channel has managed to beat the Food Network at its own game, as the hosts try four edible artifacts each episode, with some personal history mixed into the storyline, as well as the food’s cultural significance.

While eating old and expired food is obviously dangerous, the pair is always concerned about sealed packaging, preferring not to sample anything with holes. Remembering the good old days that went with the older food items is obviously a highlight, but the best thing about this show is catching either of the guys eating something that is just incredibly terrible. While that hasn’t happened too many times through the five episodes I’ve watched, they are enjoyable.

Much of the food eaten on the show either comes from personal collections or purchases from online auctions. Some of the items sampled:

Tasting Fritos corn chips from 1979 was a cautionary tale, a 40-year-old bottle of Tabasco continued to ferment within the bottle turning “dark and evil” and a 26-year-old bottle of Crystal Pepsi actually turned into a light brown color, but was still in good shape, possibly because there was no caffeine.

If the hosts don’t actually own the products in question, they will sometimes visit other collectors who are willing to share the experience. Other times, a professor/food historian actually prepares classic foods, such as a Great Depression meal (baked onions filled with peanut butter and stale bread crumbs), as well as a Great Plains food source: moose nose jelly!

The show moves quickly and there’s not really a lot of spare time, as the hosts jump straight into the four items sampled of each episode. It’s definitely a program that will entertain those with short attention spans.

The guys attempt to connect to the past with each of the food items sampled. Sometimes there’s personal histories, other times there’s hopes for breaking world records.

I really like the show so far, especially the guys’ attempts to replicate a story of U.S. soldiers patching holes in their fuel lines with the rock-hard Tootsie Rolls… which seemingly worked!