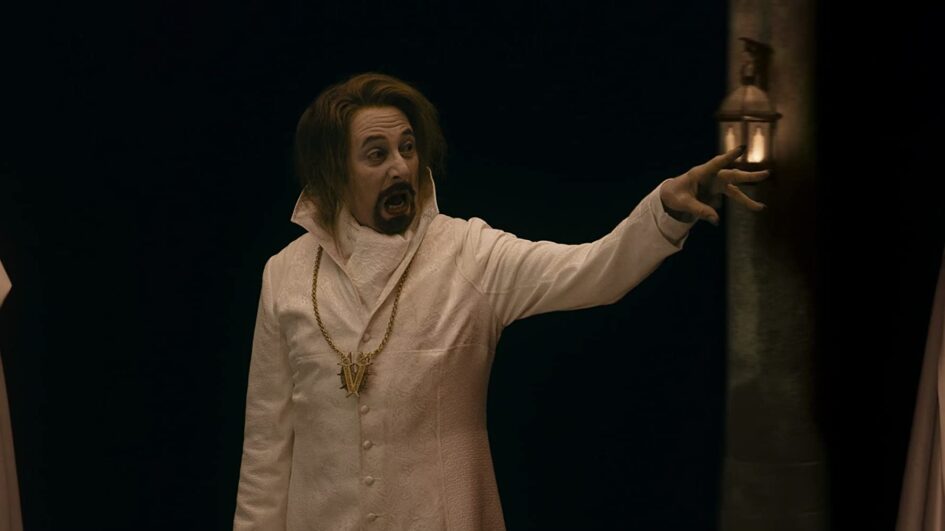 Paul Reubens reprises his immortal role from Buffy the Vampire Slayer in the FX series, What We Do In the Shadows.

How would you behave if you were three 100-year-old vampires, living in New York, baring your souls while being followed by a documentary camera crew and you just accidentally killed an ancient one from the Old Country? In case you’ve been hiding under a rock for six years, you may not know anything about the indie feature film What We Do in the Shadows, brought to life by Taika Waititi and Jemaine Clement. If you’re a horror fan, if you enjoy vampire movies and TV shows or you simply like understated, wacky comedies, you really need to check out the television adaptation, airing on the FX Network.

But before Wednesday’s Season 2 debut, if you only have time to watch one episode from the series’ first season, make sure to watch “The Trial.” In it, the members of the Vampiric Council have traveled from all around the world “to administer supreme and final justice” on any vampire that’s violated The Vampiric Code. The series’ three main characters — Nandor, Laszlo and Nadja — are charged with the second death of Baron Afanas (aka The Baron), The Undying One, which was accidental.

Their trial is determined by a group of immortal peers, who just happen to be the actors portraying their well-known characters from big- and small-screen platforms. Each actor has previously played a vampire role in a movie or TV show at some point, including:

Four other big-time actors were mentioned, but they were apparently otherwise occupied and unavailable: Kiefer (Sutherland, of The Lost Boys), Rob (Pattison, of Twilight), and Tom and Brad (Cruise and Pitt, from Interview With the Vampire). There’s so many in-jokes, gags and callbacks to previous episodes, including the Shadows feature film and random pop-culture sources, it’s more than worth multiple viewings. You’ll definitely find new jokes to laugh at as you catch up on the past 10 episodes.

While you’re under quarantine and self-distancing orders, what better time to seek Easter eggs, cameos, pop-culture references, jokes and smartly written dialogue while preparing for the show’s second season?

Going into the show, I really wasn’t sure what to expect. But after watching the series premiere, I was absolutely intrigued with the premise of following these funny characters. Life after death has never been so enjoyable. The original film’s creators have done an incredible job with their small-screen adaptation. While Taika Waititi was busy filming Jojo Rabbit (and subsequently winning an Oscar) and series creator Jemaine Clement was appearing on Legion), the genius of this show was gestating.

After watching the season finale, what can we expect for Season 2?

Guillermo has been working as a familiar/assistant to these three vampires for 10 years and desperately longs to become a vampire, but the revelation that he’s related to Van Helsing, the vampire slayer, might just delay those plans. The immortal and unholy trio continue to embrace the 21st century, while passive-aggressively attempting to take over the world. Will 500 ravens be summoned after The Baron’s last sip of blood reawakend his crisply burned body? And the introduction of Craig Robinson means it’s definitely time for a mini Office reunion, as Mark Proksch (Colin Robinson, the energy vampire), played a minor role as a warehouse staffer in that show’s final seasons. Will the 90-year-old baby return with more hissing of anger? We can only hope.

With the recent announcement that Dracula will be next introduced in the Blumhouse Monsterverse, I highly encourage Jason Blum to give Taika or Jemaine the chance of a lifetime to bring another of Universal’s classic monsters to life via the big screen. That would be epic!

Viewers can expect a second season of 10 more ridiculously absurd episodes, starting on Wednesday, with the season premiere of What We Do in the Shadows, “Resurrection.”