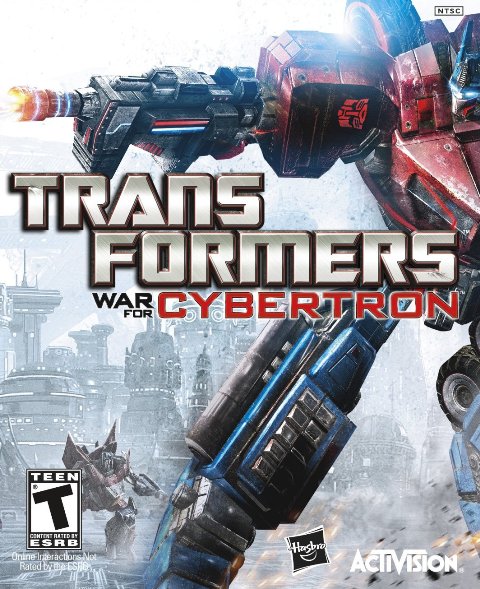 Per Matt
Is Transformers: War for Cybertron more than meets the eye?

On the outset, it appears this is a gamechanger (so to speak). Original characters from the G1 (Generation One) cartoon are reimagined to their time before crash-landing on planet Earth. Thus, the beginning of the Transformers Civil War on the home planet of Cybertron.

As a Child of the ’80s, this game takes me back to my all-time favorite cartoon, The Transformers. Back in the day… before Michael Bay got his grubby little mitts on my beloved sentient robots, when Optimus Prime didn’t have the ridiculous paint job (and Bumblebee was a talking VW bug). Hasbro has christened this storyline as the NEW official canon, rewriting many of the storylines from past cartoons, comic books and real-life CGI movies (thank goodness!).

This game is a third-person shooter, allowing the storyline to follow the dastardly Decepticons (who are more fun to play) or the heroic Autobots (a tad bland). Cybertron is a grungy, grimy place where everything is nickel plated and looks the same. This is a game that is better played at night, so its darker tones are more decipherable. The Decepticon campaign focuses on corrupting the core of Cybertron with Dark Energon so Megatron can rule with an iron fist. The Autobot campaign focuses on stopping the Decepticons.

Many of the original personalities are long gone. Voice Actor Peter Cullen returns to voice Optimus Prime (the lone G1 returnee). Other good Voice Actors are featured, including Steven Blum (Barricade, Shockwave) and Nolan North (Brawl), but I desperately miss Frank Welker’s Megatron, Chris Latta’s Starscream and Scatman Crothers’ Jazz — everyone else is an imposter!

With a revamped storyline, many characters feel out of place. Ratchet and Bumblebee were supposed to be pacificsts… but not here. Optimus is a reluctant leader and the last Prime of Cybertron to lead the Autobots.

According to the comic book, there aren’t many drones. However, in this game, there’s nothing but drones filling the storyline. Quite a few anonomous robots are simple to kill, while several boss battles are epic (and extremely tough). Fighting Omega Supreme and Trypticon took multiple attempts, but I definitely didn’t feel robbed of the gameplay.

The multiplayer option is infinitely broken, while feeling tacked on and unnecessary. It isn’t fun in the least. There are relatively zero people looking for legit matches. The only people looking to play are boosters (not that that’s a bad thing). On top of that, High Moon Studios boasted of giving fans an unlimited double-XP boost, but that seems to have been forgotten, as it’s no longer available. Playing the Escalation game mode (similar to Halo‘s Firefight or Gears of War‘s Horde mode) is relatively fun (if playing with experienced FPS players) or inexcruciating (maddening if playing with n00bs). The endless waves of robots to destroy gets a tad monotonous and eventually difficult. There’s no splitscreen option, so both co-op and multiplayer are online-only versions.

There is DLC available, but it is unncecessary, only character skins, level designs that offer no new achievements. I don’t normally have any interest in watching the closing credits of anything, but this time was different. Stan Bush’s cheesy-but-fun music closing the game was just the throwback I needed, since I haven’t watched my 20th Anniversary Special Edition of Transformers: The Movie lately. Guess it’s time to pop it back in!

With 2014 being the 30th anniversary of The Transformers toy line, cartoon and comic, there will big developments in the new year, including a new feature film by Michael Bay (withheld sarcasm)? Could a new video game be far off? We hope not!

Strength: A good TF game with a few original voice actors!
Weakness: Monotonous scenes (and robots to kill).
WTF Moment: Quite a few important characters were intentionally left out… for the sequel!