Twisting Halloween with the Food Network 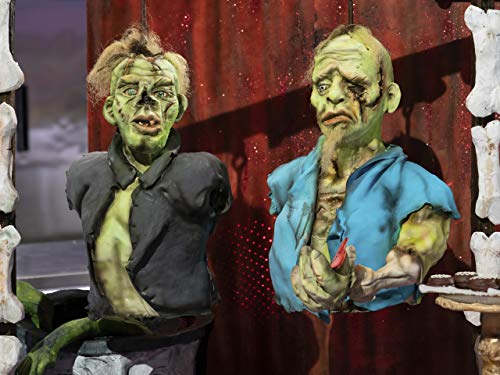 "Zombie Dating Show" was an episode in Halloween Wars' Season 9.

Holidays have become incredibly commercialized in the United States — shocking admission, I know. On the flip side, when I visited Europe 19 years ago during Christmastime, I was incredibly underwhelmed with the decorations and festivities. So, it should come as no surprise that Food Network has gone all in when it comes to holiday programming.

Pumpkin carvers paired with sugar and cake artists. It might seem like an odd combination, but that’s only if you’ve never seen Halloween Wars. The television series is a combination of reality TV and a game show (much like other programming on the channel). Six teams are tasked with creating the creepy and the kooky, formulating the funny, molding the macabre and shaping the spooky. It’s a fun show that incorporates a rotating guest judge, who’s usually someone well-known within the horror genre. Season 9 of the show has featured Elvira, Mistress of the Dark, Colman Domingo (of Fear The Walking Dead), Harley Quinn Smith (pop-culture daughter of Kevin Smith) and Jackson Rathbone (of Twilight). This show really has become necessary viewing during the spooky season. But it’s not the only seasonal programming.

Other shows include Outrageous Pumpkins, Haunted Gingerbread Showdown, Halloween Baking Championship (which incorporated an Addams Family theme to synchronize with the latest movie’s release), Kids Baking Championship, Halloween Cake-Off and themed episodes of Guy’s Grocery Games and Chopped, among others. And the seasonal shows don’t stop once the sweets are discounted in November. As soon as Halloween ended this year, as early as Friday I saw previews to the upcoming Holiday Baking Championship, which just happens to have a Christmas theme. But what happened to Turkey Day?

You can’t forget all the shows for perfecting Thanksgiving dinner and the best ways to serve side dishes of turkey leftovers, but those feel more like how-to shows, while the Halloween ones are more entertainment based. And it doesn’t hurt that October hosts one of the most enjoyable holidays of the year.

While not a big fan of the host, Halloween Wars can be quite entertaining at times… especially when watching the teams of Burned at the Cake, Buttercream Beast, Frosted Freakshow, Hangry Haunters, Malicious Mavens and Trio of Terror. If you happened to miss any of this year’s episodes, I’m sure they’re still available to watch On Demand, but always prepare your DVR! Apparently, the show was the network’s second-highest rated program last year, clocking in with 2.2 million viewers.

For Thanksgiving programming will surely arrive swiftly, and, like I mentioned before, the Christmas commercials are already airing as if there’s no stopping this channel from finding upcoming seasonal programming. And if you believe a recent article appearing in The Hollywood Reporter, after Food’s nine percent ratings spike in the fourth quarter of 2018, the network has added 40 percent more seasonal episodes this year, including expanding into Hanukkah for the first time. Since 30 percent of viewers were tuning in for the first time last holiday season, expect even more shows to feature the holiday themes this year.

Obviously, it’s never too early to prepare for the next big holiday.