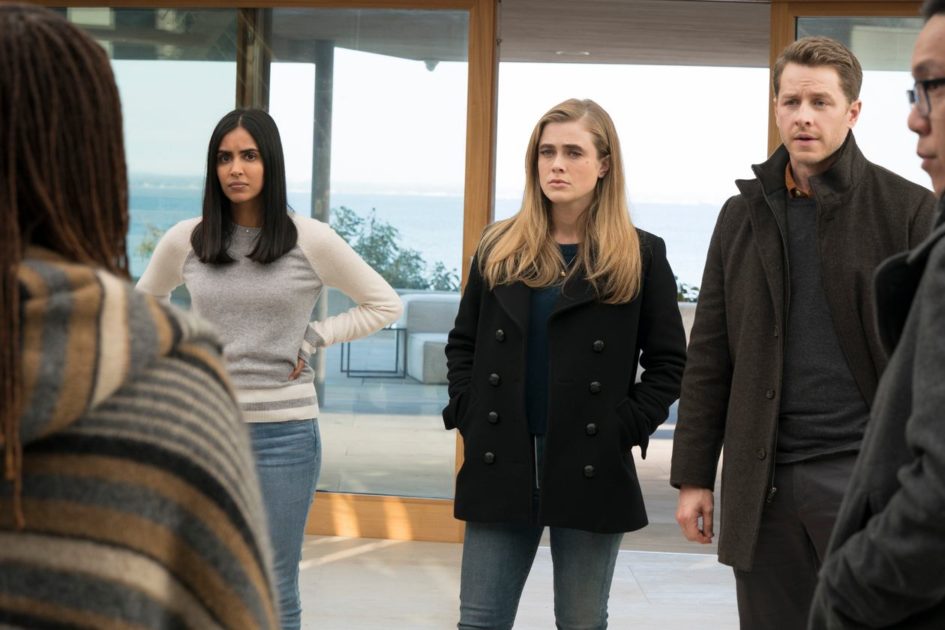 What’s up with all these weird callings? That’s what the characters of Manifest have been wondering aloud, and so have the show’s viewers. Unfortunately, after watching the mid season premiere this week, neither audience has gotten many answers to their questions.

“Crosswinds” has definitely ramped up the conspiracy theory angle for the show. There’s now a covert military organization searching for their Holy Grail. Believers have been worked into the storyline, as well as an obsessive podcast host. The government believes the passengers of Flight 828 are criminals and treats them like guinea pigs, involving them in science and medical experiments gone wrong. Oh, and if there wasn’t enough drama involved, there’s a mole worked into this group of survivors as well.

In terms of characters, Ben (Josh Dallas) is still the most sympathetic, Michaela (Melissa Roxburgh) is still the most believable, Saanvi (Parveen Kaur) is the most desperate, Jared (J.R. Ramirez)  is the unnecessary love interest/work partner, Cal (Jack Messina) is channeling the pain from the ongoing human experimentation and Grace (Athena Karkanis) is still the most painful character to watch.

With the death of NSA Director Vance, there must be a new face for the show’s antagonist (as it seems to change with each new episode), and the “Major” has been introduced in this episode with that role. She hasn’t been shown yet, but her power seems mighty within the government and capturing — possibly killing — Michaaela Stone seems to be her primary objective.

A shared consciousness is treated like a science project gone wrong and there’s plenty of frustration from these characters, as well as the show’s viewers (including this one), in terms of figuring out what’s going on. After 10 episodes, this unsolved mystery still lingers and its magical effects seem to change with each new episode, whenever convenient to its storyline.

The overall theme has become all about protecting and loving those who don’t reciprocate. While past comparisons were made of Lost because of a somewhat similar storyline, it’s become increasingly clear this is much more annoying to watch (and to get answers from). As mentioned earlier, Manifest feels more like an intimate family drama with splashes of science fiction sprinkled within its storyline as needed, rather than simply focusing on the supernatural, and that’s why I dislike this show so much. If you want the audience to relate more with these characters, quit shoving an unnecessary extramarital affair into the storyline that’s still causing turbulence for this poor family down our throats, because it’s only making me despise anything related to Grace, and as an effect, Danny (Daniel Sunjata).

In fact, I’d rather see Michaela and Ben focusing on these awakenings as paranormal detectives, while totally dropping the ongoing police department and family drama aspects of the show, while possibly focusing more on the conspiracy theories and government cover-up of the entire situation. With that scenario, it could play more like The X-Files (and ultimately Lost) than a soap opera dipping its toes into the science-fiction pool. Maybe, if ratings last through the end of the year, it could be a soft reboot for Season 2. That’s a Manifest I’d like to see.