Vagrant Queen: Star Wars in a Feminist Galaxy (Not Yours) 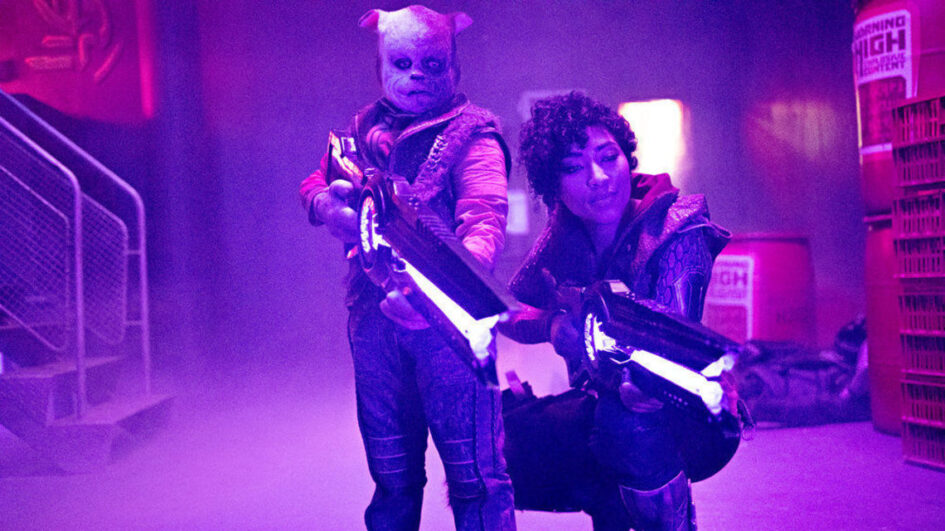 Picture this, if you will, in a galaxy far, far away (not yours): A scavenger with a hidden past gets hunted down by a vastly outnumbered, overpowered evil empire that wants to end the royal bloodline of a phantom menace. The Big Bad hopes to prevent the troops from gathering and forming a rebellion. Vagrant Queen is this new science-fiction show airing on Syfy that features low-budget special effects, psychedelic lighting and forced dialogue, which is based on a Vault Comics series.

This is a superhero show for a new generation, as the hero is female, the showrunner is female, the writers and directors seem to all be female and the villain is a Caucasian male. If you thought the social justice warriors of Lucasfilm didn’t take the narrative far enough in the sequel trilogy, then you may really like this one.

In addition to the bright neon-colored fonts floating around the screen, this is a story taking place in another galaxy, where the aliens’ latex masks look cheap (and the actors can’t properly move their mouths to speak), while some of the costumed creatures look menacingly cool (the bad guys of The Republic, naturally, in the Stormtrooper roles). The actors’ oneliners fall with a thud, but the overall storyline is interesting, if not wholly original.

“I swear I saw this in a movie once.”

As much as Vagrant Queen attempts to proclaim it’s different from anything else ever aired before, a plot device felt way too easily borrowed from Star Wars to throw the hero into a trash compactor in the very first episode.

Nim, the dog-faced little, loyal alien creature was the most likable character in the first episode, and he was seemingly killed off way too soon. That doesn’t bode well for a new series to lose its strongest character… that’s primarily a supporting role. While there’s plenty of time for the series to improve, there are only 10 episodes lined up for Season 1, so hopefully the scripts will get tightened up pretty quickly.

I’m always interested to learn about the latest sci-fi program, especially when it’s one with a comics origin story, so I naturally had to check this one out. Unfortunately, I still haven’t forgiven Syfy for cancelling another comic book property, Deadly Class, which felt vastly superior to this new series in its acting, writing, direction and special effects for starters, as well as an all-around fun mood shared throughout its cast. Through one episode at least, I didn’t perceive any of that in Vagrant Queen.

As a show, Vagrant Queen fits well under SYFY’s Original Series banner. Unfortunately, regular viewers to the network will quickly point out how much it screams of its low-budget costumes and special effects (something almost all of the channel’s original series sadly share). There’s enough of a storyline for it to build onto. Hopefully, it will quickly branch away from its Star Wars roots and bloom into something new and interesting.