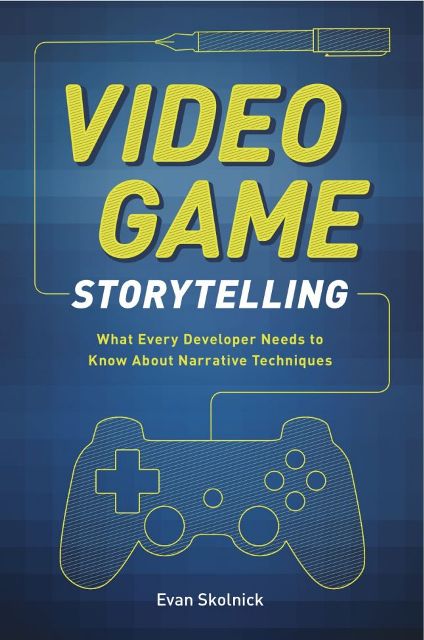 Per Matt
Video games, much like blockbuster movies and best-selling novels are crafted with extremely tight deadlines and trying circumstances, but that doesn’t mean their storylines should receive the short end of the stick, when it comes to the development process. Author Evan Skolnick hopes to fix your writing woes with his book, Video Game Storytelling: What Every Developer Needs to Know About Narrative Techniques.

It’s a process that’s tough to wrap your mind around, let alone perfect, but Mr. Skolnick does a great job of breaking down a successful story and detailing how to create one from the ground up. In order to create a powerful one, you must first understand that all game developers are storytellers… every single person who contributes to the video game is developing the story. That means in order to successfully tell a tale, there must always be good communication flowing between each segment of the game.

Author Skolnick has spent more than a decade working with hundreds of developers to solve narrative problems within the video-game format. His book, Video Game Storytelling, is divided into two parts: Detailing the well-established principals of Western storytelling and giving the storytelling job descriptions for each type of contributing developer of your game.

Part I of the book details all of the major concepts that are necessary for writing a well-developed story, while Part II breaks down the various creative roles for each video game developer. I found the first half of the book to contain immeasurable writing tips, which are not only limited to video games, but applicable for all types of story-telling formats. This storytelling breakdown is equally adaptable for books, TV shows and movies, as well as video games.

“If you were to come away with only one lasting lesson from this entire book, I would hope it would be: ‘story is conflict.'”

In terms of good story-telling techniques, many well-known movies are often referenced, as well as the video games he’s previously developed. While I recognized many of the game examples listed, less than 50 percent of people fully complete any given video game, so some references will be missed entirely by video-game novices.

Shared intent, exposition, consistency, coincidence, spectacle and surprise are all primary factors affecting the believability of a storyteller that must be adequately addressed. I found each of these elements incredibly important when focusing on the video-game format, exclusively.

There’s a lot of pushing and pulling involved between game designers and writers during the development of a video game. The Design vs. Narrative tug of war can be difficult to manage, with the success of a franchise lying in the balance. Balancing both sides can be a tough proposition, but is possible to create a well-crafted narrative.

As a writer, I applied the first half of the book to one of my unfinished screenplays and found it incredibly helpful to advance the story. The second half of the book was unnecessary, since I’m not building a video game, but interesting nonetheless. And since I’ve previously played quite a few of the games he referenced, I already had some insight on some good (as well as bad) examples of the format.

While the book feels like a traditional how-to write textbook with a partial emphasis on video games, the lack of many diagrams and illustrations makes it easy to zone out while reading. Also, author Skolnick switches pronouns frequently, when referencing the reader, writer, game designer and other storytelling roles, never keeping a constant reference point. This can be confusing at different times when he’s generalizing the subject matter. I’d prefer him to pick a pronoun and stick with it throughout the entire book, but that’s just me. One example even uses both sexes when referring to a role, which is the most confusing of them all: “She’s willing to die to get what he wants.” Crazy, but true.

The best part of the book are the documents included within the Appendices: A Sample Character Description Document and A Sample Environment Description Document, which can be used for many different types of storytelling projects. I look forward to adapting them both to my unfinished screenplays.

By writing this book, the author hopes to add more well-developed stories to the video-game world and offer global insights for each person’s role in creating a successful video-game story. I received this book from Blogging For Books for this review.

Strength: Successfully breaks down important storytelling elements.
Weakness: Sometimes subject matter gets confusing and a tad professorial.
WTF Moment: The Pixar Rule of Coincidences can and should be used for creating powerful stories in all types of formats.

Notable Quotes:
– “Weak villain equals weak hero.”
– “The fuel of fiction is the conflict.”
– “In the real world, no one thinks they’re evil.”
– “The conflict in your story only needs to feel huge.”
– “Amateur writers generally produce amateur writing.”
– “Video game storytelling doesn’t begin or end with a writer.”
– “Buts are what stand behind the many obstacles the player faces.”
– “There is no character more essential to your narrative than the hero.”
– “Under the hood, nearly all stories are built pretty much the same way.”
– “Game development is a team effort and the team wins or loses together.”
– “Without an unresolved conflict fueling the experience, the audience perceives they are not in an actual story.”