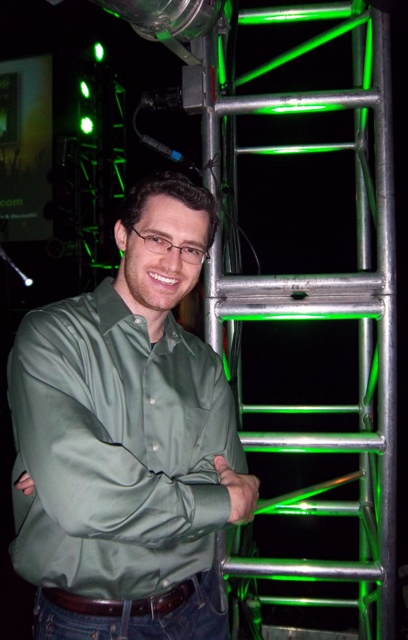 Per Matt
After three long years of working on the score to Journey, when the video game was released in 2012, it instantly became the fastest-selling PlayStation game ever. Austin Wintory’s soundtrack also made the highest debut in video game history on Billboard’s charts. Later that year, he received the first-ever Grammy nomination for a video game score. It was quite a remarkable year for Composer Austin Wintory. Since then, Mr. Wintory has kept busy, crafting scores for feature films, touring and conducting various symphonies around the world, and while continuing to work in the video game industry. At San Diego Comic-Con, I finally caught up with Mr. Wintory backstage at the San Diego Civic Theatre to discuss working in the video game industry, moments before he went back to work as a Guest Conductor at Video Games Live.

You’ve had quite a rollercoaster of a year. Is there any way you can sum up the emotions you’ve experienced?
– “Honestly, I don’t think so. It’s been equal parts truly wonderful and so surreal that really seems not real. Some things are surreal in a way that I can’t believe they happened. That’s so great. This has transcended that to, ‘This did really happen, right?’ It’s not the awards. That part was very surreal as well, but the kinds of stories people have emailed about the way the game (Journey) kind of crept into their life in a way that shocked them. How much they came emotionally unhinged, because of it, and things like that, goes so beyond my wildest dreams, of what it could have been. I wouldn’t have even called it a dream. My greatest ambitions were not for people to have those kinds of reactions. They just sort of happened and I was caught off guard by it. That’s been, by far, the most meaningful. Something that I touched — I would dare not say I made — could have had the impact that it had on people, is unbelievable to me.”

Upon completion, was it even a possibility in your mind, Journey could resonate with so many people?
– “I was going to count myself lucky if people responded to the game at all, because it’s a very different kind of game. Sometimes, that really goes the other way. The best response you’ll get is, ‘I thought it was interesting,’ or people will say, ‘I see where you are going with that.’ ‘I see what you’re trying to do.’ That’s probably my favorite, that people could say, like you’re some little kid, reaching. I thought all of those were very possible, because it’s a different kind of animal. The fact that it was so dramatically the opposite of that, the people really got it and then reacted the way they did… I was fully prepared to just consider myself lucky that people would remotely respond. I was not prepared for what actually happened.”

We originally met at ScoreCon. Where has your personal journey taken you, since then?
– “I remember I was in Amsterdam, the morning before that, speaking at a festival there. It’s been a constant stream of those things, and of these concerts, as well. This is my third Video Games Live in seven days, and I’ve got two more next week, but of course, I’m also writing, in the midst of all of that, as well.”

Could you tell me a little about your upcoming games?
– “I have a game coming out in little over a week and then another one coming out a week after that. That kind of dovetailed. One of them is called BeatBuddy. It’s a crazy, very weird game. I only worked one part of it. They got a bunch of different artists — mostly European dance music DJs who are amazing and very well known, and then weirdly, they reached out to me to do dance-jazz music. It’s a very cool game. It’s sort of an Adventure-Platformer, but it’s also a Rhythm game. You essentially navigate these puzzles by remixing the music in the game’s environment. That comes out very soon, I want to say August 6th. There’s another game called The Banner Saga that I’m working on that will come out this Fall that I’ve already been working on already for over a year that’s in major full-swing right now. I feel very lucky.”

We missed you at the Nashville performance of Video Games Live.
– “I know. I always look at the calendar and then plot which ones I can come to. Inevitably, there’s 50 that I can’t, because Tommy (Tallarico) does these things every day, it seems like.”

Are you mostly catching Video Games Live performances in California, or whenever you can work it into your schedule?
– “I try to go whenever. I went to Brazil, I went to Washington DC, I went to Texas and a bunch of others. I went to Irvine on Wednesday and then there’s San Francisco next week. Those are a lot easier, but Brazil was well worth it, despite the 20 hours of travel, or whatever. Damn good time.”

Are you conducting orchestras outside of VGL?
– “Journey’s actually been performed in concert a TON, outside Video Games Live. They’re not tours. For example, the Nashville Symphony does concerts. They have full-season subscription series all year. Sometimes these orchestras will do Night At The Movies and they’ll play John Williams music. And there’s this trend of these fully legitimate, non-pickup, non-community regional orchestras doing game-music concerts. For example, I was flown to Germany in November. The WDR Symphony Orchestra in Cologne did two nights in a row of all game music. So, Laura Karpman was there, because they were playing music of hers from EverQuest II. Richard Jacques was there, they were doing some of his James Bond 007: Blood Stone score and they were doing some Final Fantasy and classics.”

“It’s a very different show from Video Games Live, because it’s like going to see your symphony, but they’re playing game music. It’s treated in a more formal kind of way as if you were going to see Beethoven or something. It’s a totally different experience. There’s actually been just as many of those as Video Games Live performances of Journey. It’s just part of the surreal thing. I keep a spreadsheet and I think it was something like 55 performances in concert last year. There’s the Aria I did for the end credits called I Was Born For This and I made an arrangement of it for choir, that doesn’t need an orchestra. That’s been performed. It’s just wild. The whole thing is insane.”

A lot of your compositions have been for PlayStation games.
– “Well, Journey and Flow were both Sony-owned games, so those are certainly exclusives, but I did a game last year with Double Fine that was called Kinect Party that came out in December. I did about half of the game. I did not do the dubstep part — that’s what everybody thinks of. The got a legit dubstep guy. I would have been an imposter on that. I did the kung-fu part, which was one of the most fun times I’ve ever had, writing music. I love those guys. And BeatBuddy, I believe, is coming out on XBLA. Just because I have a really wonderful relationship with Sony and we continue to work together, I don’t actually work for them. I’m very equal opportunity.”

What words of advice would you give to all the aspiring musicians out there?
– “I would say to eliminate the word ‘aspiring,’ from your vocabulary. If you are a musician, you are a musician. End of story. No one can tell you you’re not. So, the aspiring part implies, ‘I’m not there yet. I’m not doing it.’ For me, the distinction came in the decision that I’m a composer now. And now, I have to figure out how to get paid for it, so I can do it for a living. Nonetheless, I am a composer. I can’t offer any career advise, because it’s very specific. Everyone’s career unfolds in a way that’s very particular to who they are, who they meet in their path through life. All of those things are going to be special and unique to each individual person. That’s just how the world works. Every human being is like the hub of a wheel, with all these spokes of everybody they know, around them. There’s no two that are going to be the same, as a result. That is how careers are born: through those spokes.”

“The important thing is to just own the part that you are, which is the center — the core. If you say, ‘I want to be a composer, I want to be a performing musician,’ stop saying ‘want to,’ stop saying ‘trying to,’ just say, ‘As of today, I am that thing.’ Now, how do I make the rest of the world realize it? Because once they do, I’ll actually have a career. That’s something people will make in their own way. That’s why music is wonderful, because it is not this abstract, extant thing. It is a product of the individuality of the people making it. I have no idea if that makes sense, but hopefully it does. It makes sense to me.”