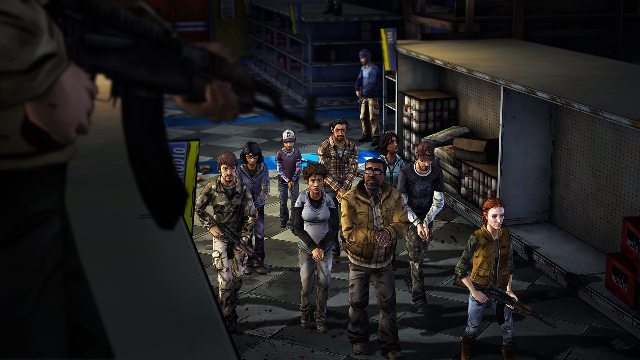 As if they were jumping out of the frying pan and into the fire, Clementine and her group always seem to be getting into worse situations.

The Walking Dead’s Season Two continues with Episode 3 and Clem and the gang are definitely In Harm’s Way. They’ve been kidnapped and hauled back to Carver’s camp, where they face an uncertain situation.

For the past few episodes, Bill Carver and his thugs are the people most of Clementine’s newfound friends have been fleeing. Even though he claims redemption and salvation for his lost flock, Carver won’t tolerate weakness and incompetence. Hoping to make examples to his followers, he seemingly relishes becoming judge, jury and executioner — all rolled into one persona.

Kenny’s impatiently looking to make a move, so it’s no surprise when he sticks his foot in his mouth, making the wrong impression to his captors. Afterward, the rest of the gang quits bickering among themselves long enough to rally together. Somehow, Luke works his way into those escape plans, even though he’s been missing for days. With several thousand walkers headed toward the hardware store, it’s now or never for Clem and the Gang to make their move!

The majority of the episode takes place at Howes Hardware, a big-box store that screams it’s based on Lowes or Home Depot. In reality, that would be an ideal place to wait out the Zombie Apocalypse… if that was even possible. Carver’s community has utilized solar panels for electricity and grown fresh veggies in a greenhouse. The only thing that could disrupt his plans is an extra-large herd of walkers.

Carver’s character seems to fit the same megalomaniacal mold that created The Governor. He’s out there. But his character is written so well, his actions compel the player to wonder, “Which direction will the storyline go, next?” Episode 3 has no true plot twists, it’s just a well-written story that never seems to slow down.

Kenny has lost a bit of his cockiness from Season One, but he still shines in the spotlight. Jane’s character is noteworthy because she’s always improvising when things go bad. When she reveals Lee’s trick of covering her body with walker guts to escape the undead monsters, Kenny finally compliments Lee, even if it’s posthumous and a little overdue. That was an enjoyable call-back to Dave Fennoy’s character, Lee Everett.

All of the achievements in Episode 3 are story-based and none of them are missable. While I prefer action-based video games, I don’t tend to enjoy quick-time events very much. However, there is one very cool and creepy QTE in this episode that’s a blast… taking place in the dark. I really enjoyed it and wouldn’t mind replaying the entire episode just for that moment.

Although not a lot of background information for Carver was actually revealed, I’m starting to wonder if he actually raped Rebecca (on par with The Governor from the graphic novels). I hope more information will slowly uncover itself for the remainder of the season on this despicable character.

Looking ahead to Episode 4: Has Luke really gone missing, yet again?

Strength: Storyline never runs out of gas. Plenty of great action.
Weakness: Clementine ALWAYS gets the short end of the stick, in the storyline.
WTF Moment: Kenny sure is a glutton for punishment, but he’s GREAT at taking a lot of abuse!

Notable Quotes:
– “Looks kinda crappy.”
– “Lee figured that out.”
– “We’re leavin’ tonight.”
– “It’s not your decision.”
– “Tough is all we got, now.”
– “Ain’t no saints in all of this.”
– “Will you please just try not to get into trouble?”
– “I thought about Duck today and his dumb little face.”
– “Everybody’s parents are dead. That doesn’t make you special.”
– “It turns out the person you thought you knew was never even there.”