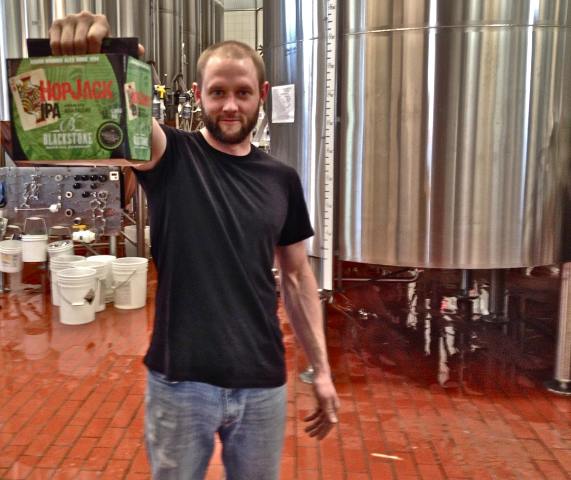 Per Matt
Blackstone Brewery has made a name for itself, helping kick off the craft beer craze in downtown Nashville 20 years ago. Within that timeframe, a lot of good beer has been made, along with it, many awards were won at various beer festivals. Continuing my Beer with a Brewmaster column, Blackstone’s Josh Garrett gets excited for the just-released HopJack IPA beer, discusses the growing microbrewery scene of Nashville and looks ahead to competing at the 2014 Great American Beer Festival.

How did you initially get involved making beer?
– “I started brewing at home about nine years ago. I homebrewed for three years and then got a job working with Dave Miller at The Pub. This is the only brewing job I’ve ever had. When Dave retired, I kind of took over for him. Blackstone has been my one and only brewing home.”

What were some of your homebrewing inventions?
– “Homebrewing was wild. Nothing was off the table with homebrewing. That’s the difference in professional brewing: You have to make beer that’ll sell. When you make it at home, it doesn’t matter what it tastes like. It can taste terrible, but at least you played with it. You throw anything you find in the kitchen, when you’re homebrewing. The first 10 beers I made were probably undrinkable. I had no idea what I was doing.”

I’m guessing Blackstone sold a lot of beer last year?
– “Oh, yeah. I think we did about 12,000 barrels last year. We’re growing steadily every year. We’re at max capacity for the tankage that we have.”

What would you say is your favorite type of beer?
– “I’m all over the board. I like pretty much everything. I would say IPAs are my go-to beers. I just like drinking hoppy beers. I love stouts. I’m a seasonal drinker. It pretty much depends on the temperature outside.”

What’s the best-selling beer for Blackstone?
– “Nut Brown is right now. That one’s pretty steady all year round, because it’s in the darker beer category, but it’s still a very light beer. The other brands tend to fluctuate with the seasons. In the colder months, porter sells substantially better than it does in the warmer months. Chaser — our Kolsch — sells substantially better in the summer months than it does in the winter months. I’ve decided most craft beer drinkers are seasonal drinkers, for the most part.”

Can you tell me a little about your newly released beer, HopJack IPA?
– “It’s our new American, low-gravity IPA. We made it, basically, to compete with your Sweetwater IPAs, your Lagunitas IPAs. It can be sold in retail stores vs. liquor stores, where most IPAs are sold. It’s 6.3 percent, which is right on that line that allows us to be sold in retail stores. It’s made with centennial, cascades, simcoe… lots of hops. It’s a pretty aggressive IPA.” 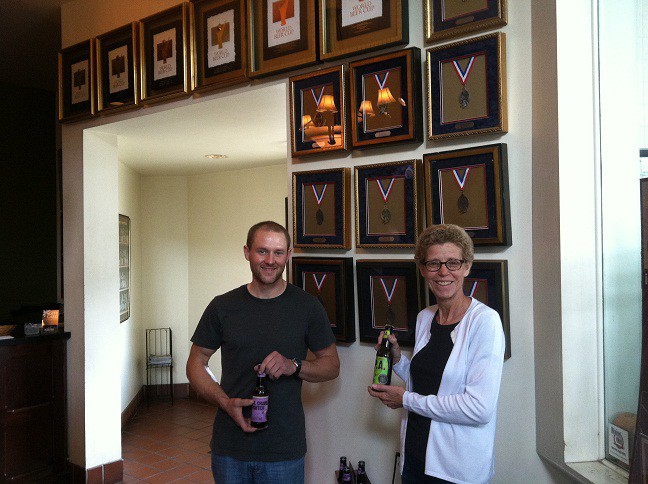 Together, Blackstone Owner Stephanie Weins and Brewmaster Josh Garrett are winning many awards.

Can you preview any other upcoming beers you might have on tap?
– “We’re brewing our chocolate-milk stout next week. That should be out by the first or the middle of June. Of course, we just had our barrel-aged Imperial Stout, that’s been out for about two weeks. We’ve got a whole lot of stuff coming down the pipeline.”

Would you say there’s a current trend for breweries making really hoppy beers?
– “I think IPAs are the hottest style of beer, right now. That’s why you see so many popping up. The thing that makes IPAs such a great beer to make is that when you have such a vast array of hops to use, you can make endless amounts of IPAs and none of them will taste the same. Whereas with a lot of beer styles, it’s pretty much a narrowly defined category. So, you’re going to have the same flavor, for the most part, between a whole array of beers vs. the IPAs, which can be all over the place.”

How do the hops in HopJack compare with your other beers?
– “We just added simcoe. This one has cascade, centennial and simcoe, so it’s a little bit danker, a little more aggressive than our APA, which, of course, Adam Bomb is more aggressive. It’s got simcoe, chinook, cascade, centennial, citra… it’s just got a whole bunch of hops in it. This is more of a middle-of-the-road beer, in between the APA and the Adam Bomb.”

What kind of hops are used for the Chocolate Milk Stout?
– “Hops are irrelevant in that, for the most part. We put just enough in there to get the bitterness. That’s all about the malt. It’s got eight different malts in it; it’s got 60 lbs. of cocoa nibs from Olive & Sinclair, here in town. So, that one’s more about the malt than just the body and the flavor. Hops play a secondary role.”

Why is your pumpkin beer so popular?
– “It’s a great novelty beer and it appeals to everybody. People just love it for the season and ours is really good. It’s like drinking pumpkin pie.” 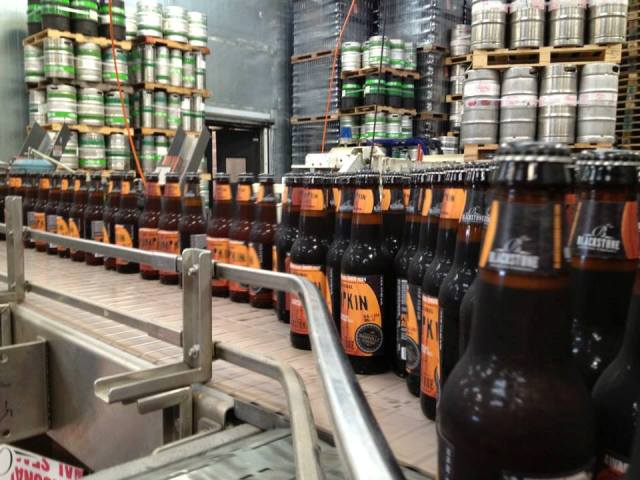 What’s the secret behind your successful porter?
– “It was a homebrew of Kent Taylor, the owner of the company. He made it back in ’91 or ’92. That’s why he built the brewery. He made that porter and knew it was a phenomenal beer and wanted to sell beer professionally. He’s been winning medals for that for 15 to 18 years. It’s a solid recipe. There are very few porters that I’ve ever had that have come close, in quality. When that beer is at its best, it’s hard to beat that beer.”

How will the new Tennessee alcohol law affect Blackstone’s beer distribution?
– “They just changed the law to allow beer up to 10.3 percent to be sold in grocery stores, but I don’t think that takes into effect until 2016. You won’t have to buy it in liquor stores any longer. Right now, Adam Bomb is sold in liquor stores and we’ve got planned releases for a lot of high-gravity beer in the upcoming year through 2015. With the high-gravity law changing, that’s going to allow us to do a whole lot more. Shelf space is a big part of the issue with how many brands you can have. When the high-gravity stores open up more shelf space, then that allows us to do a lot of different brands. Plus, we still have The Pub, that we use as a test kitchen. A lot of our test batches are still being brewed over there on the smaller system.”

How long has this bottling facility been in operation?
– “This facility has been here going on three years. Everything was done at The Pub. We had been doing draft out of The Pub for retail sales for four or five years prior to opening this facility. We knew we had traction in the market. This was their main goal, I think, from the beginning, anyway.”

What do you think about the burgeoning microbrewery scene of Nashville?
– “It’s blowing up. Sustainability should be interesting to see, over the long term. We’ve had seven or eight new breweries just in the last year and every time I go, they’re all slammed-packed full. People are really buying into it. It’s really nice. We’ll see different beers from other markets come into our city that we wouldn’t have had before, because our beer scene is growing. Other breweries are going to want to come in, as well. It’s tough for competition, with our own beer, but it’s also nice, as a beer drinker, to see these other brands coming into the state. It’s exciting. It’s taken a long time for our city to get to that point.”

Blackstone is the only brewery in the state to have a functioning lab. Why build it?
– “Honestly, Schlafly. We brew all the Schlafly pale ale drafts for the entire country. They required a contract for us to have a lab. It’s a good thing they did, because we’ve learned a lot about our own beer.”

How was that arrangement formed?
– “Dave Miller — the guy who was our original Brewmaster — was the original Brewmaster at Schlafly. When we got this facility going, they knew Dave well enough to know that he could handle their beer. They needed more capacity than they had in St. Louis, so they asked us to brew their beer.”

What upcoming events are scheduled for Blackstone Brewery?
– “We’ve got Brew at the Zoo, which is a really cool event. They set up different breweries and food vendors at the different exhibits and The Nashville Beer Fest is in July. We also do all sorts of charity fundraising events.”