Per Matt
On The Walking Dead, Big Tiny was known for being a calming influence, willing to work things out peacefully with others while the Zombie Apocalypse was breaking out. In real life, Theodus Crane based those characteristics on his own personality. Although Big Tiny was a short-lived role, it was one that had a major impact with many fans of the show.

At the Lexington Comic & Toy Convention, I visited with Mr. Crane to discuss training for the ultimate role, portraying Big Tiny and the one big thing he wished his character could’ve done on the TV show.

Please tell me a little about the process of becoming Big Tiny.
– “They requested an audition and with technological advances, we can send auditions via email. I live in New Orleans and normally, there’s an audition, a callback and a table read. After the first round of auditions, they hired me. It was an easy process. I drove down to Atlanta and that was it.”

What did you know about the show, before the audition?
– “Absolutely nothing. I hadn’t seen the show and they didn’t give me any information about my character, about the scenario… anything. Everything they told me was fake. The role that I auditioned for was not a real role, in the show. I didn’t know it was a graphic novel, first. Intentionally, I didn’t watch it beforehand, just to bring something different to it. In that instance, it was great for me.”

Did you meet Kirkman?
– “I did not meet Kirkman, but I met just about everybody else who was involved with running the show.”

Did you have any interaction with Glen Mazzara?
– “Very little. I think I met him when I first got on set. They gave me a little tour, but honestly, I was so excited and so discombobulated by the experience, I don’t remember our interactions. It was a lot to take in.”

How much of Big Tiny’s character was influenced by the script? How much of it was influenced by you?
– “It was pretty much all me. Basically, what I brought in the audition is what they wanted in the character. Working with my acting coach, at the time, it was really being as much as myself as possible, in that given situation. They actually gave us a lot of freedom, behind the scenes, to come up with our own backstory.” 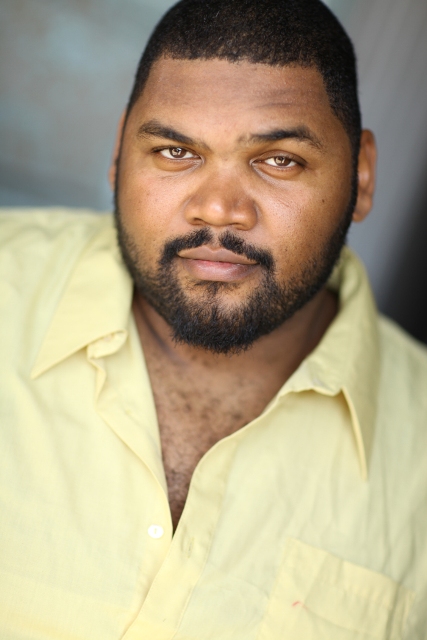 What direction were you hoping your character was headed?
– “When they hired me, they told me and my agent it was between two and eight episodes. Basically, I had the possibility of being on the show for roughly half the season. Filming it, I’d hoped that at least a couple of us would be with the survivors. Being that I’m a big guy, I’m pretty athletic. I’d be one of those muscle-of-the-operation characters. That was just my personal hope. I’d love to be in that kind of role, in the show. I liked the direction they took. They gave him a little bit more character. I enjoyed that. Honestly, the only thing I wish was different – with the exception of still being on the show – is I wish I could have gotten to turn. It would be really interesting to see me… as a Zombie. When I watched the season, I realized they only let two people turn. I think it would have been awesome to see a 6-foot-8-inch Zombie.”

Kirkman has been criticized for killing off many of his minority characters. Do you have an opinion on the topic?
– “I’ve heard it before. There was evidence that leant toward it in the earlier season. I think what really was going on was they were trying to get their feet underneath themselves. They changed showrunners, and things of that nature. Right now, they’ve got a pretty diverse cast. I guess, if I was to make my own Zombie Apocalypse story, given my background, the demographic might be a little different. But in South Georgia, it’s not that far off. That’s an aspect of it, but he tells good stories, he’s got good characters, it’s got a lot of depth to it. The way he approaches the subject – black, white, Asian or otherwise – there’s a genuine human element to each of the characters. It’s not all good and bad guys, there’s a range that you go through. I really appreciate what he does with that.”

What are some upcoming projects you’ve been working on?
– “The Bag Man, starring Robert De Niro and John Cusack just came out. The Starving Games came out in November. I had some pretty good screen time in both of those. I had a little role in a movie called Barefoot, with Scott Speedman. It’s a romantic comedy. I was in Christmas in Conway. In the future, I’m doing a lot of auditioning; keeping my nose to the grindstone. In the meantime, I’m getting in the best shape that I can, working toward an action role. I fight, so I’ve been competing and training.”

What kind of fighting?
– “Boxing, kick boxing, judo and a Chinese martial arts called Sanda. It’s basically kick-boxing with throws. I’ve always competed in something, to that effect, since I was a kid. Getting back to that has been refreshing. It’s been really fun.”

Will you be making an appearance at any upcoming conventions?
– “I’ll be appearing at Pop Con in Indiana, so be looking out for me coming to a convention near you.” 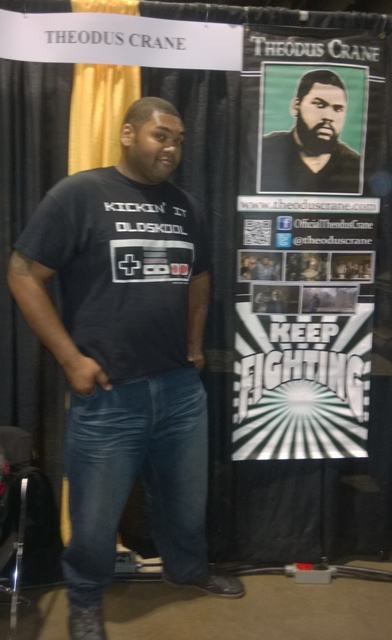