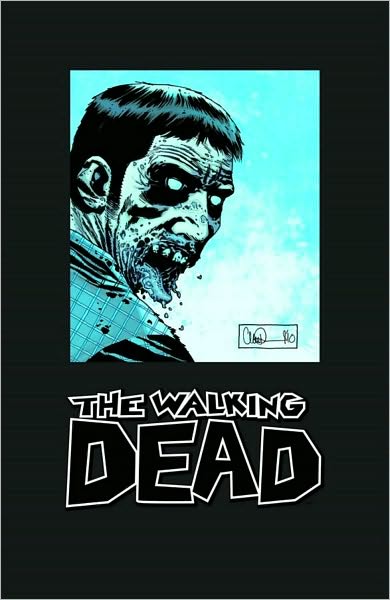 The Governor is dead and Rick’s Gang is on the run from The Prison, so what’s the next destination for these survivors?

In less than a week, AMC’s The Walking Dead returns to the airwaves with Season 5. Looking ahead to where the TV show may go, we dig a little deeper into the source material for possible TV storylines with The Walking Dead Omnibus #3.

Recapping the conclusion of the previous book, everyone has fled from The Prison. Rick lost an arm and The Governor lost his life. A portion of Rick’s Gang bailed before The Prison was overrun and Baby Judith was one of the casualties.

Chapter Nine picks up with Rick and Carl in bad shape. Foraging among abandoned houses while on the run, Carl’s getting too big for his britches and Rick’s in pain. When Rick passes out, Carl fights some “roamers” alone, dropping f-bombs along the way. This version of Carl somehow feels less annoying and less entitled than the small-screen version, although there’s never a pudding scene.

When Michonne arrives from the woods, her mental state (as well as Rick’s) has clearly deteriorated. Both are shown talking to ghosts. Glenn and Maggie find the trio, arriving on horseback, leading everyone back to Hershel’s Farm, where Dale, Andrea, Sophia and the twins (Ben and Billy) await. Together, Rick’s Gang amounts to six adults and four kids, but Rick’s not making decisions anymore.

In an annoying subplot that continues throughout practically each book, new characters randomly appear out of thin air. This time, Sgt. Abraham Ford, Rosita Espinosa and Dr. Eugene Porter arrive, seeking supplies en route to D.C. Apparently Dr. Porter was mapping the human genome for weaponization purposes when the plague broke out. Everyone leaves together.

During a pit stop, Maggie hangs herself, unable to deal with it all. She’s saved, but ruins her voice. Rick gets his mojo back after second guessing his decision making and Abraham has a panic attack. Apparently he and Rosita are an item, unlike what is shown on TV.

Returning to his hometown for supplies, Rick finds lunatic Morgan, who joins the group. After restocking weapons from the isolated police station, Rick experiences his very first Zombie herd. Back at camp, Ben kills his twin brother, Billy, and the adults fight over his punishment, when Father Gabriel Stokes emerges from the woods. Carl kills Ben, but nobody sees him do it.

Back from his supply run, everyone retreats to Father Stokes’ church, seeking shelter from the herd, but another enemy has appeared. A group of cannibals have kidnapped Dale and eaten his other leg. The laugh’s on them, as Dale reveals he’s tainted meat (having been previously bitten). The cannibals toy with Rick’s Gang until he sets them straight. Vengeance is sweet. I see the similarities in Terminus and these wooded cannibals, as well as the killer children of the woods, as depicted on the small screen.

Chapter 12 quickly reveals Eugene’s secrets when the Rick discovers his radio doesn’t have a battery and never did. Eugene has always been lying to the group, in fact, he’s no government employee at all, but a high school science teacher. Randomly, Aaron arrives. He’s recruiter for a D.C. community that has recruited Rick’s Gang. Running out of food, their decision is easy.

This gated community is led by Douglas Monroe, a former Democratic Congressman from Ohio, and the place runs on an isolated solar-power grid. Everyone’s assigned jobs comparable to their talents and Rick, naturally, becomes their police officer. The place is surreal, offering a slice of life from before the Zombie Apocalypse. No one feels secure, having given up their weapons to live there. But with no walker threats, returning to normal life is difficult for Rick’s Gang. That’s when Glenn receives orders to recover their confiscated weapons… to be continued.

Omnibus #3 collects issues #49-72 of The Walking Dead graphic novel. Supplement material includes a sketchbook of crude comic covers, describing the background of each one, as well as finished (and corrected) cover art.

Overall, this is a great group of stories, many of which were already highlighted in AMC’s Season 4. Although the TV series takes a different turn in the overall storyline, many of the subplots of the graphic novel are used in the TV series. Be on the lookout. There might just be quite a few spoilers revealed for AMC’s Season 5. To be continued…

Strength: Quite a few graphic-novel storylines are preferable to the TV series.
Weakness: Zombified characters are difficult to discern in black and white.
WTF Moment: More than a few walkers arrive during bathroom breaks. Where’s that on TV?

Notable Quotes:
– “I should have done a lot of things.”
– “They’re fucking with the wrong people.”
– “It’s not the dead I’m afraid of anymore.”
– “I don’t need you to protect me anymore.”
– “We do terrible things for the ones we love.”
– “Fear not for I have prayed for safety tonight.”
– “It’s OK to be sad. We both have dead moms now.”
– “Calm down, Rick. Lack of confidence doesn’t suit you.”
– “Will someone come over and stab this thing? I want a sword.”
– “I’m a scientist, Mister… and I know exactly what caused this mess.”
– “The things out here trying to eat you won’t be stopped by a little scripture.”
– “I’m noticing a disturbing trend. You guys point a gun at anyone who disagrees with you.”