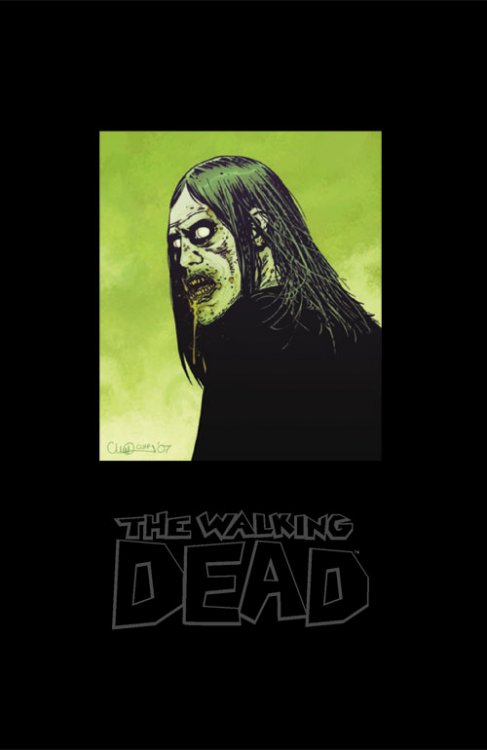 Just in time for The Walking Dead’s return to AMC this week, I finally picked up Omnibus Vol. 2 to continue Robert Kirkman’s never-ending tale of the Zombie Apocalypse.

Catching up, so far: Shane’s dead, Rick’s Gang is hunkering down within The Prison, Carol slipped Rick some tongue and the Ricktatorship has just ended. This is where Chapter Five begins.

Lori is still pregnant, Sophia is still alive, Otis is still ornery and more than a few people are losing it. It’s only been seven months since Rick abandoned Morgan and Duane and Rick’s Gang is still exploring The Prison, searching for a generator. Eventually, they find multiple riot-gear suits, along with a weapons cache.

Rick’s Gang is minding its own business until a downed helicopter is spotted. Exploring the wreckage, they’re captured and taken to Woodbury. Each of the hostages is tortured for information. The Governor rapes Michonne multiple times and chops off Rick’s hand before they escape. Martinez, the head of Woodbury security, helps them flee, along with the medical assistant, Alice. Michonne gets some revenge by mutilating The Governor, lopping off an arm, destroying an eye, biting off his ear and nailing his manhood into a board of wood.

Returning to The Prison, which has been overrun by biters yet again, Rick’s Gang quickly switches into clean-up mode. Once everything has settled down, Rick realizes Martinez has fled, hoping to reveal their location to The Governor. Rick runs him down, ending the threat.

Next goal: supply run. Luckily, the Gang discovers a nearby Army National Guard station, full of fuel and weapons. En route to The Prison, they stop at a deserted Wal-Mart for additional supplies and encounter The Governor’s gunmen. Glenn tests the riot gear’s bullet-proof armor and highjacks an extra-large military truck as everyone escapes.

Back at The Prison, the Gang experiences some infirmary blues. First some joy; then some agony. Alice assists in delivering baby Judith and then immediately must deal with lopping off Dale’s just-bitten foot. She also hopes to study the undead, searching for a cure and Carol is constantly looking for a new man to throw herself onto before killing herself.

Over at Woodbury, The Governor makes a miraculous recovery and promptly starts a frantic search for The Prison. Once he finds it, The Governor invades with his militia. Short on ammunition, the Gang has let the Zombies gather outside the fences, forming a protective perimeter. Fighting the living and the undead, The Governor’s troops injure Andrea, Dale, Axel and Rick, before retreating. After everyone is bandaged up, Rick gets a blood transfusion while Dale and Andrea form a group, abandoning The Prison for a safer, temporary, spot.

With Rick stabilizing, but temporarily out of commission, Michonne and Tyrese don riot gear and undertake a covert mission. Things go South quickly. Tyrese is captured by The Governor, who attempts to leverage his prisoner for The Prison. When the Gang refuse, Tyrese is killed and Michonne escapes. Dale and Andrea’s group returns, but their RV is destroyed. Feeling remorse after killing Lori (who was carrying baby Judith), Lilly kills The Governor. The Prison is destroyed and Rick and Carl are on the run. But are they the only survivors? To be continued…

At the Omnibus’ conclusion, the graphic novel has now caught up to the Season Four mid-season finale. I’m finally all caught up (until Sunday, that is)! These 24 issues of the graphic novel (Issues #24-48) have really explored the hopelessness of Rick’s Gang during uncertain times, while they prepare for the worst. The uber-religious Hershel considers the Gang’s current tribulation of being tested and strengthened to be The Rapture, come true. Death is everywhere. In fact, when blood splatters within the black-and-white action scenes, it actually looks like confetti is tossed into the air, raining onto everyone.

Other major events include Maggie and Glenn getting married, Carol offering to marry both Rick and Lori, Dale getting a peg leg and The Governor removing his undead daughter’s teeth before French kissing her. AK.

Also included within the book is the 2005 Image Comics Holiday Special, a cover sketchbook and comic covers (in vibrant color). According to the Afterward, killing off characters keeps Kirkman interested in the storyline and Tyrese was one of his favorites.

So far, The Walking Dead has reached 48 issues and has only focused on a small area within Georgia. While the storyline is nowhere close to ending, Kirkman hopes to explore all sorts of different locations in the future, filled with many types of people. Guess that’s a little foreshadowing for future episodes of AMC’s TV version, as well.

Strength: Brief glimpses of life before the Zombie Apocalypse.
Weakness: There wasn’t a whole lot of backstory to The Governor.
WTF Moment: There’s crazy, then there’s Walking Dead crazy! Some of it goes beyond belief.