The Wolf Among Us: Episode 2 – Smoke & Mirrors 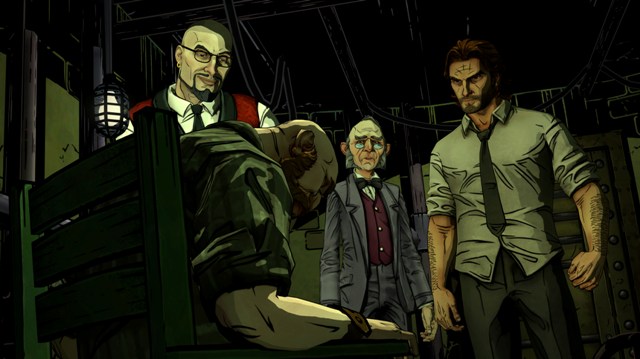 Bigby Wolf is on the case in The Wolf Among Us: Episode Two – Smoke & Mirrors

Per Matt
Telltale Games returns to Fabletown with a dark and brooding storyline full of murder and deception.

With Smoke & Mirrors, the second episode of The Wolf Among Us picks up with The Big Bad Wolf (aka Sheriff Bigby Wolf) playing detective, hunting down a serial killer in New York.

Bigby is a rough-and tough, no-nonsense lawman. Everyone’s a suspect, human and Fable alike. He’s a loner and he’s got very few friends. But as the episode opens, the tables have turned. The New York Police Department interrogates Bigby as a person of interest in one of the gruesome deaths, resulting in death by decapitation.

While researching the evidence, Bigby realizes this case has gotten personal: There’s a stalker obsessed with Snow White. Bigby hopes to uncover the truth and keep her alive, all the while yearning to strengthen their relationship.

Without giving too much away, Bigby survives by quick thinking, a little luck and oftentimes, more than enough brutality to resolve the murder mystery. Many of the series’ famous characters reprise their roles in the video game, including Bigby, Snow White, Beauty and the Beast, Mr. Toad, Ichabod Crane, The Little Mermaid and many more. While Bigby does his best to keep all the many Fables undetected in the every-day world, figuring out who the characters are before they’re introduced is half the fun.

The Telltale Formula is back, which caters the game around the player’s decisions. That means the replay value is very high. No two games will ever be the same. The Wolf Among Us is an adventure-based point-and-click game based on DC Entertainment’s long-running and Eisner Award-winning comic book series, FABLES.

As a relative newcomer to the FABLES Universe, I’m enjoying simply soaking up all the atmosphere and mythology within The Wolf Among Us: Fables have lived among humans for many centuries. There’s good and bad characters — some frequent the neighborhood bar while others visit the local strip club. There’s Mundy drugs and mystical magic. In fact, Magic Mirror is both a McGuffin and a character that can shed some insight… but only when it feels like cooperating.

Speaking of characters, Blue Beard makes a brief appearance in Episode 2 and I expect him to have more of a presence in Episode Three. I really like Blue Beard’s voice (I don’t know the character’s voice actor, but I like what I hear) and can’t wait to explore his character in future episodes.

As a gamer, most of the achievements are story based, but there is one missable achievement, Apprentice Librarian, which will pop after you unlock all the Book of Fables entries. This may take additional playthroughs. The Wolf Among Us is a five-episode series available as a downloadable game via XBOX Live Marketplace, Playstation Network and the Telltale Online Store.

I cannot wait to uncover more of the facts, as the overall story is finally revealed!

Strength: A rich mythology, mining great characters in the every-day world.
Weakness: At times, some of the violence can get a little out of hand.
WTF Moment: Deciphering some of this Universe’s dialogue can be a little difficult… but gets easier with subtitles turned on.