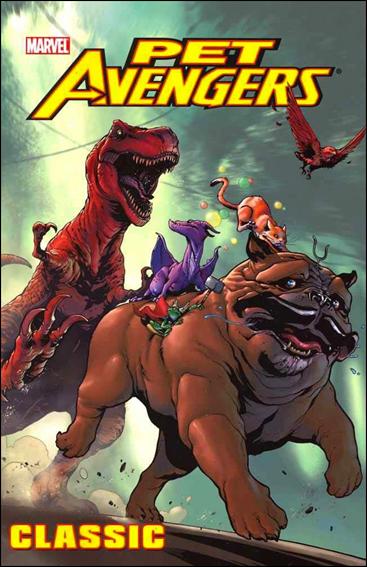 Even superheroes have sidekicks!

Pet Avengers Classic features stories depicting various animals saving the day, in the Marvel Universe. While some of these were basic page-fillers, secondary stories hidden in the back of comics that ran a little short, others proudly shine spotlight on these secondary characters who wouldn’t otherwise receive the recognition.

There’s Lockjaw, the teleporting dog, tasked with babysitting the offspring of The Fantastic Four and teaching The Thing a lesson or two. Redwing, The Falcon’s pet, receives top billing, but is kidnapped by a villain and ultimately saves his master’s life. Other stories are merely day-in-the-life adventures, including Speedball’s pet cat Niels, Two-Guns’ horse, The Defender’s pet pooch, and Daniele Moonstar’s flying horse, Brightwind.

Other stories, like Animal House, focus on animals that aren’t pets. In this case, Red Ghost’s Super-Apes have overtaken a Kansas zoo, which takes a political stab at PETA.

Unfortunately, a couple of stories feel oddly out of place. Zabu, the sabre-toothed tiger is highlighted in a 17-page adventure, exacting revenge on a caveman who killed its family, which felt long to develop and a bit boring. Who wants to read the mind of a silent predator, anyway? Also, Flesh of my Flesh is another sad story of revenge, after drunks hunt down a wolf mother and her pups. Obviously, these stories are older, but their inclusion is questionable.

Two of the best stories are featured near the end of this trade paperback. The Coming of… Squirrel Girl introduces this hopeful Avenger, who actually saves Iron Man from Dr. Doom. And in a pre-Marvel story by Jack Kirby, a Martian on the run switches bodies with a human, but it’s man’s best friend who saves his life.

Many of these reprinted classic stories are worth reading, while a few don’t quite make the cut. Rounding out the book are a few pet bios that detail each creature’s powers, possibly overlooked by most.

As an animal lover, I enjoyed imagining my pets being heroic. Ultimately, it would take a super-human feat to get them out of their comfy beds, but it’s still fun to pretend.

Strength: Even animals can be heroic…
Weakness: … and, at times, tragic.
WTF Moment: Hamster Havoc depicts the Fantastic Family as if they dwelled within the Calvin and Hobbes comic strip. Too cute.