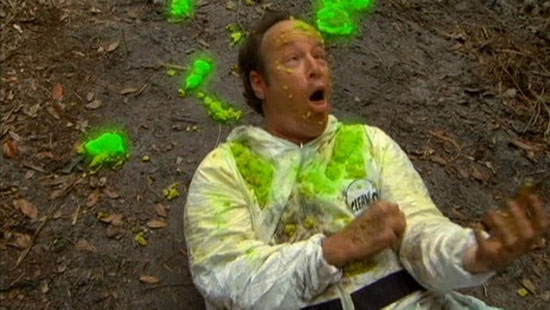 Every time I say to myself, “That was the weirdest fucking movie, ever,” I get a new screener from the good folks over at Troma and I’m introduced to something even more bizarre than before. Slimed will easily make it into the Pantheon of Unusual Films that I’ve watched over the years, and in a marvelous way. Militant atheists, confused Christians, exploding kids and evil puppets are just some of the things that make this movie a schlock masterpiece. I mean, within the opening five minutes of the film, our main character punches two annoying little girls in the face. How can you not love this?

Let’s start with a quick synopsis, shall we? Slimed is the story of Ranger Rock “Rocky” Rockerson, a nature-loving, God-hating and, honestly, inept hero in a Florida park, struggling to keep the land open to the public, while the IRS hounds him for money. With his mentally defective sidekick, Sally, he finds himself absolutely in love with all that is nature. He meets a young Bible salesman named Pepe (pronounced pee-pee by Rocky), who learns fast that his faith isn’t welcomed here. The duo has a hard time bonding until a man covered in a glowing slime tells them about a door in the middle of the park. The entrance to the secret lab takes them deep into the bowels of a surreal laboratory, where the crazed human-mouse is perfecting a dangerous, green slime known as Clean-O.

Made in 2010 on a shoestring budget by filmmakers/directors Eric Manche and Jeff Nitzberg, Slimed is a perfect mixture of absurd, juvenile humor, coupled with a larger message about conservatorship of the natural oasis, steadily dwindling due to incompetence and a sort of self-induced blindness. The effects are sub-par in the most delightfully cheesy way possible, especially as Rocky and Pepe battle the crazed, slime-gun wielding children in the forest, where you can see mannequins dressed in clean suits as stand-ins for our heroes to pummel.

My favorite part, however, has to be the scenes with the human-rat. The drugged-out muppet mouse in a lab coat, with his bulging, sinister eyes, is responsible for the release of the slime, called Clean-O, and is absolutely insane. I’m not talking about that excitable level of insane, either, but in the grips of a full-blown mania that prevents his mind from existing and functioning in the real world. The design of the puppet was perfect, making him look like Rizzo’s junkie cousin and he was easily the most ludicrous and hilarious thing in this movie.

This isn’t Oscar material in any sense and that’s part of the charm of this movie. You’re not watching some pretentious melodrama, masked as a comedy. You’re not being subjected to shaking camera angles and high-octane action sequences in the latest blockbuster action flick. You’re getting a stupid, fun escape from reality with an underlying message that will make you think as you try to figure out just what in the hell you’ve watched.

Slimed is streaming on Troma Now! and if you still haven’t signed up to be a part of this incredible service, you really should. Like a Netflix of schlock and independent film, it’s got everything that indie fans could ever want.