What Happened to BattleBots’ Desperado Tournament? 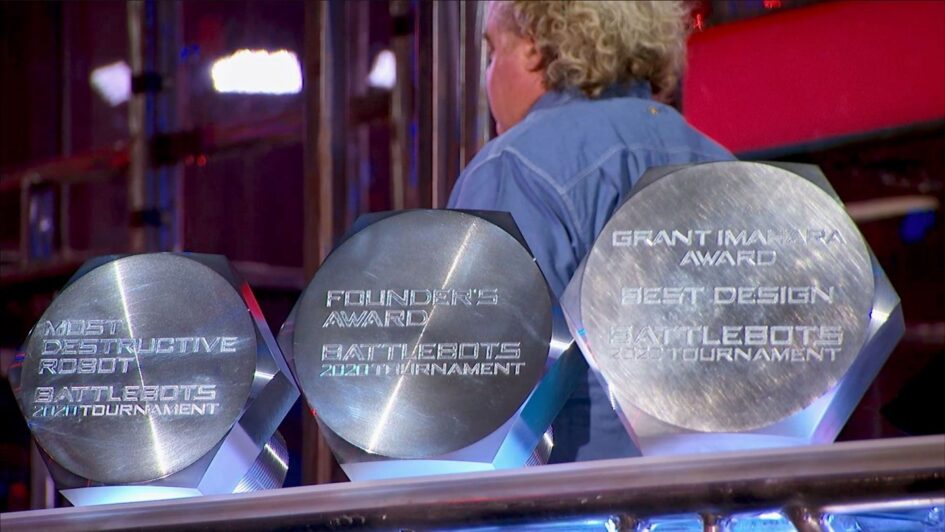 Per Matt
For the past two years, the most exciting portion of BattleBots has been The Desperado Tournament. Sure, the hard crashes, violent behavior, fire, smoke and destruction taking place in every episode is always fun to watch between the dueling metallic competitors, but this event brought all of that and more into one compact, self-contained episode.

Taking place midway through the the robot-fighting competition, eight bots with losing records battled it out via a play-in mini tourney. The winner received a trophy (The Giant Bolt) and an automatic bid into the Top 16. This was my favorite episode of the year, which was always enjoyable, leading into the world championship tournament. For some reason, The Desperado was scratched this past season and I’d really like to find out why.

The battle for the Giant Nut is an epic one, but what happened to The Desperado Tournament?

A whole lot of changes happened in 2020, with COVID-19 being blamed for most of them. As movie theaters, live events and public performances were all paused for the most part, some television programs continued, but with altered formats due to safety concerns. I’m not gonna lie: With all other entertainment options dwindling, I was looking forward to the return of BattleBots the most! I was happy to see the season premiere (COVID Complications Can’t Close BattleBots), but the self-imposed changes were obvious. There were still 55 contestants fighting for The Giant Nut, so I accepted the alterations. But when the half-way point of the season came and went without any mention of The Desperado whatsoever, I was really bummed.

Last year, I complained about the show’s overall format (As the Playoffs Begin, BattleBots Gets Real!), which felt like the Rules Committee was constantly playing it by ear, never being quite transparent about how many victories were necessary to get into the final brackets. This year, the competitors only got three opportunities to show the Rules Committee what they’d got… everyone else was left out, as there weren’t any other options to build some momentum going into the Big Show.

Team Black Dragon and Team Lock-Jaw won the Giant Bolt in the past. This year, The Giant Bolt was not given to the Desperado winner, but as Best In Show trophies, awarding Most Destructive Robot (Valkyrie), The Founder’s Award (Skorpios) and the newly minted Grant Imahara Award for Best Design (Chomp). A newly introduced trophy was also given to Best Newcomer (Rusty).

It’s safe to say I enjoyed the 2020 campaign, but it could have been better.

This season featured more experimental builds, discount builds and younger competitors than in years past. So, how’d your tournament brackets shape out?

Spoilers will follow, so if you haven’t watched the show because it’s buried deep within your DVR, leave now and return once you’re all caught up!

Part game show, part competition, all reality TV and a pop-culture gem, BattleBots has crowned its first international world champion. I am very interested in seeing what kind of adaptations will be brought to this part engineering, part mad scientist, all entertaining show next year… but I NEED The Desperado Tournament to return!!!