Why Have Ratings Declined for The Walking Dead? The AMC Chief Knows… 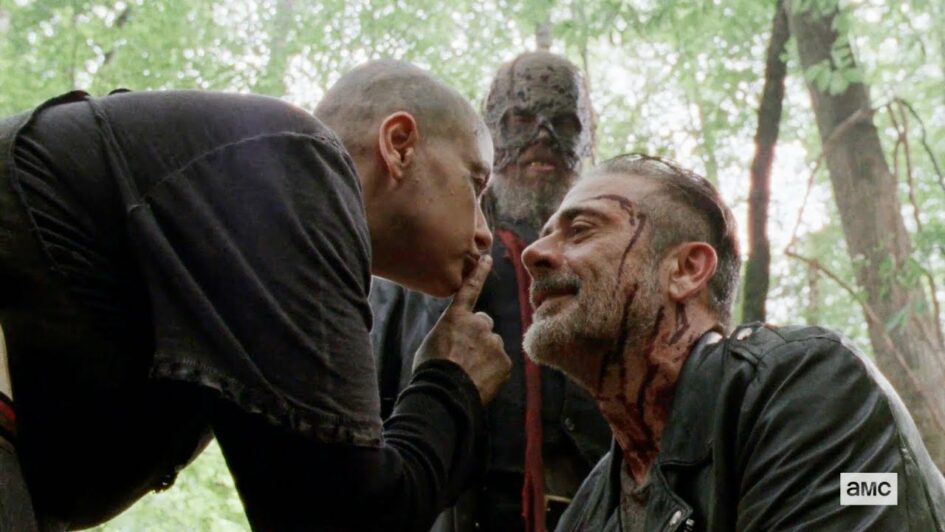 Shhh! I know the TRUE reason why The Walking Dead's ratings have declined through the years...

How far has The Walking Dead fallen? Once the basic-cable king of the world, with ratings fading on the undead mothership, the AMC network chief pinpoints the exact moment the TV show jumped the shark, er, walker…

Falling ratings are eventually expected for a hit show, especially one that reaches different demographics of the pop-culture zeitgeist. At its peak, 17 million viewers watched the fifth season premiere, making it the most-watched series episode in cable history. It was all downhill from there, as viewers departed en masse by Season 7. So, it’s only natural that the franchise rebuilt itself in order to bring in new viewers and possibly bring back those who had previously abandoned the dying ship.

In an act of clear transparency, I’m gonna admit something very important and something very painful: It’s been a mighty struggle for me to continue watching TWD. Having been onboard since the pilot aired way back on Halloween of 2010, the post-apocalyptic television series really has come a bloody long way. Mostly for the better. There’s been some great characters introduced, both adapted from Robert Kirkman’s comic series and originally appearing on the small screen. AMC has dragged walkers into the mainstream and the horror/thriller/drama has touched a nerve all throughout society. Yeah, there’s also been some missteps, as some popular characters and storylines were fumbled, along with the majority of the minority characters portrayed on the show. But for the most part, TWD has been groundbreakingly positive.

Throughout the first six or seven seasons, I attempted to watch the show first, then read the source material afterward to compare and contrast storyline elements without spoiling anything. But once Glenn Rhee (my favorite character, intensely portrayed by Steven Yeung on the show) met the business end of Lucille, I unknowingly began to lose interest in collecting the comic omnibus, catching up on the ongoing mythology.

Fast forward to the Season 10 season premiere, which brought the viewer even closer to sympathizing with The Whisperers. I’ll admit the only reason I’m still watching the show is to compare it to the far superior spin-off, Fear The Walking Dead. And to prepare for the next possible character to move over to the sister series. It seems that every character who becomes the heart and soul of the writers meets its deadly end… or gets promptly written off the show. For the longest time, that was Glenn, usually Rick and at times, Maggie. Forcibly, it was also Bad Ass Michonne, who has definitely lost her luster through the years. Now, with way too many people, places and plot devices, I’ve lost the patience to have a favorite character. And I’m not the only one.

Maybe this is why the AMC chief recently made it known to all that the network is still open for business (and hopefully new viewers). In the Los Angeles Times article, Sarah Barnett may have only been on the job for a little more than a year, but she makes no qualms that she’s a fan of the show.

“We’re plotting a lot more ambition for this,” she says. “I think there are endless stories to be told in this universe.”

But when confronted with the tipping point of the series for fans:

“In terms of the quality question, I think that with 10 seasons of television, shows go through spurts. We’ve done a lot of research on the response to it and we certainly have our own thoughts about it. It’s true to say that that season with Negan became a little too hopeless for audiences. I think that there was creative intention behind it that was really smart and thoughtful, but it I think it probably pushed people to a place where it was a lot to take at a time when maybe people just didn’t want to see that.”

And I wonder, is that the true reason people left basic cable’s top-rated show at the time? Couldn’t it be something to do with the fact audiences loved seeing humans fighting undead creatures, not humans fighting humans (with the creatures creeping around in the far background)?

I will argue to my dying days that Jeffrey Dean Morgan’s performance has been the best, ever, on the show and the fact that he hasn’t received any Emmy nominations to date is completely criminal. Maybe Emmy voters can’t get around the bloody mess the character seems to always get himself into and separate that from the actor’s role. I don’t know, but for years, the writing hasn’t been top notch on the series, while it has greatly improved lately (You would hope so, after 10 years!).

For fans of AMC’s The Walking Dead out there, like myself: Keep the faith. The show may be closer to an ending (although it was initially crafted by Kirkman to be never-ending) than its introduction, (don’t forget the upcoming third series, TWD: World Beyond), but it’s still got merit. And during these lean days between feature film awards shows and the networks’ mid-season premieres, now’s the perfect time to return to your old friends over at AMC, whether they’re hidden deep within your DVR or they can be found On Demand.

The AMC chief may actually be correct about the exact point when the series started bleeding out viewers, but it doesn’t have to end there. I’ll be reuniting with these old friends in a battle to (finally) silence The Whisperers, as I catch up on Michonne’s final episodes on the show very soon.