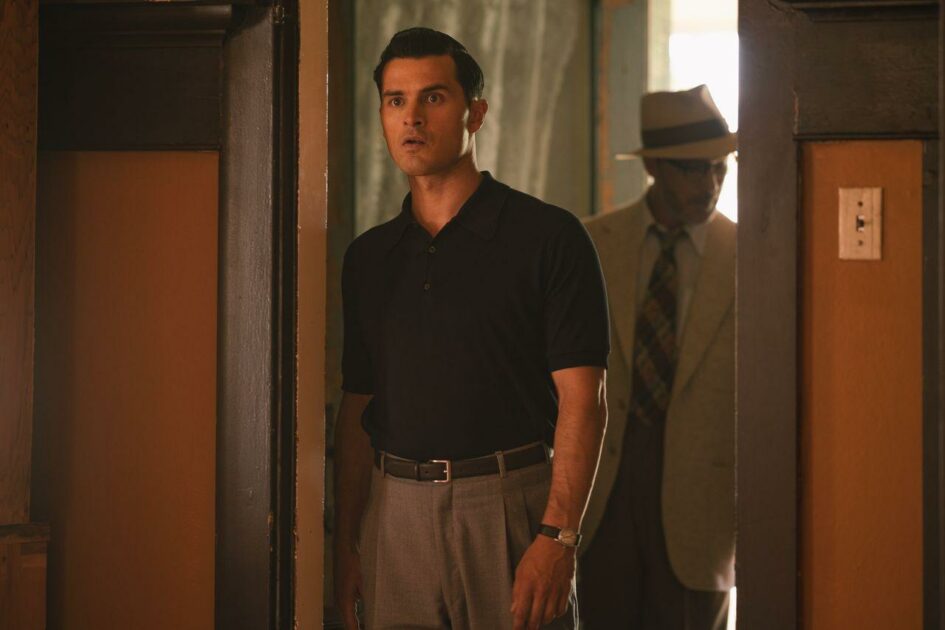 Searching for the truth continues in Season 2 of Project Blue Book as the government battles “conspiracy theories” concerning unexplained events, fear of the unknown and unusual phenomena (including aliens and flying saucers), all the while silencing the public unrest with “scientific logical explanations” in the name of national security in History Channel’s television series.

The pairing of astronomer, astrophysicist and skeptical professor Dr. J. Allen Hynek (played by Game of Thrones‘ “Littlefinger,” Aidan Gillen) with Air Force Captain Michael Quinn (Michael Mularkey) seems like an odd couple… until you realize this actually happened way back in the 1950s and ’60s, mostly as a way for the U.S. government to discredit multiple reports of mysterious, strange and peculiar events. You could say it was a real-life case of The X-Files.

From Blue Book‘s beginnings as a series to its second season, its pair of protagonists have become true believers, in a never-ending fight with the government that’s trying to silence those beliefs, while the two attempt to keep their jobs. This dichotomy is a part of the overall general disinformation campaign, which seems like it’s about to change in the show’s second season. This is what has sci-fans all up in arms.

Using a scientist as a means of debunking a greater, unexplainable opposition force is everything that believers… well, believe in. It does feel like something the debunkers would use as an agent against their values, which doesn’t seem to be above the U.S. government’s ways. Exposing the truth makes these characters enemies of the state, and as such, their employer. Talk about walking a fine line.

But an even finer line to walk is being a real-life science-fiction fan, while enjoying this TV show. It really is tough.

As a UFO enthusiast, I hate how ALL witnesses are immediately disproven and unbelieved on the show, despite all of the contrary evidence. For a while, the characters had no idea of the government’s cover-up, but once they discovered the truth, whether by public records, classified information, anonymous sources or eyewitness accounts, these truths cannot be so easily swept under a rug.

As a fan of the science-fiction genre, I want smartly written stories, but I don’t need unnecessary characters written into the storyline for the sole purpose of creating drama.To the program’s showrunner: Please remove the mysteriously sexy Russian spy who just happened to become best friends with Mrs. Hynek (who also has a crush on the otherwise useless character, Mimi Hynek) and has grand plans to help Mother Russia overthrow the Americans.

Picking up after Blue Book‘s Season 1 finale, these characters are still trying to uncover the truth while dealing with governmental propaganda, all the while keeping sensitive information out of reach from the general public. Reports of a downed aircraft lead the team to a cryptic message that purports to reveal scientific proof of a government cover-up, but is it all just a hoax or is it simply classified as such by the government in the season premiere, “The Roswell Incident — Part I?” Weird science may be the smoking gun that’s used to explain away the unknown as “temperature inversions, swamp gas, hypoxic dementia or weather anomalies,” but the truth can sometimes be stranger than fiction.

If nothing else, History’s Blue Book, much like The X-Files, has so much potential… hopefully Season 2 of the hit cable show won’t meet the spooky series’ conclusion, as both of the main characters already distrust the government, but will they continue to work for the general public?

Is the truth still out there?

With incredible set designs, costumes and cinematography, I want to believe… but the overall mythology storyline is still shaky, at best. Historical accuracy has come into question, which is incredibly important. At some points, it feels like a recreation of actual events, while others are historical fiction and still others are incredibly exaggerated or modified for the small screen. In a recent interview with filmmakers of the show for The Hollywood Reporter, the showrunner admitted, “We always say authenticity over accuracy because we’re not making a documentary.”

That’s not a good thing, when dealing with real-life events. It’s also not too great when used as fighting words in a never-ending battle between science fact and science fiction.

As a fan of sci-fi, I like the show, but there’s absolutely no transparency when it comes to revealing what the U.S. government knows about unidentified flying objects and extraterrestrial biological entities, so it’s tough to believe as a UFO enthusiast. The military secrets, undercover governmental research, classified experiments, dismissive propaganda campaigns, a melding of science fact with science fiction all make the case way too easy for the non-believers out there, but the unsolved mysteries, redacted case files and missing information from the official investigations have led these two real people into becoming the absolute most unlikely (and the very first!) paranormal investigators out there.

So, is Project Blue Book a sci-fi horror, thriller, drama, real-life parody or somehow a mixture of all of the above? Are the real-life monsters those military and political soldiers in the government? It’s definitely time to drain the swamp, as a secret Pentagon UFO program recently revealed to be ongoing and all-too real not too long ago.

Always remember: The truth is still out there… somewhere.