William Shakespeare’s The Empire Striketh Back 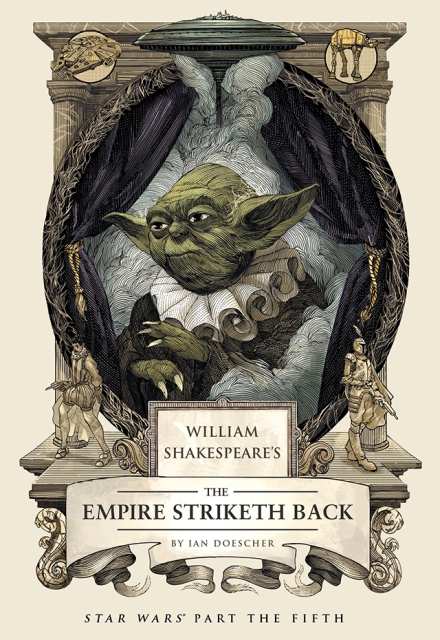 Parting may be such sweet sorrow, but combining the Bard of Avon with George Lucas’ best movie creates a incredibly fun story, one that’s fit for a king.

With William Shakespeare’s The Empire Striketh Back, author Ian Doescher reimagines George Lucas’ space opera, as if it was told by William Shakespeare. You may already know the storyline from the feature film, but by moving it into a new timeframe and using a new language (almost everyone speaks with iambic pentameter), Doescher practically creates a new story.

Following the events of Star Wars: Episode IV — A New Hope, the Galactic Empire uncovers a Rebel base on the ice planet Hoth and attempts to end the uprising before it gets out of hand. Luke Skywalker escapes to Dagobah to learn the ways of the Force through Yoda’s teachings and a detailed trap is laid at Bespin to catch Luke and his friends.

The majority of the book is written in iambic pentameter, which means most of the characters speak with a poetic verse. Much of the story’s action takes place while the characters speak, so it’s not always clear what’s happening “onscreen.” Since I’ve seen the original Star Wars movies hundreds of times, I can easily visualize everything in my head, even if it’s not described on the page.

Some of the best dialogue, much like William Shakespeare’s Star Wars, is spoken by C-3PO, but because iambic pentameter can extend a thought through two to three sentences, it’s hard to quote snappy one-liners from the book. I did my best.

One of the most charming aspects to Ian Doescher’s two Shakespeare-Star Wars books is the ability to give non-sentient objects the ability to think and speak. He has created several great memorable moments with a Wampa, a trio of AT-ATs and even an exogorth speaking in soliloquy.

For the second time in two books, R2-D2 speaks in asides, hoping to protect his master instead of maintaining his “droid-like silence.” This was, yet again, classic.

With all this fuss about Shakespearaen dialogue, there are actually two characters who don’t speak in iambic pentameter: Yoda and Boba Fett. Yoda’s dialogue in the book — like his inverted speech in the movies — is different from all the rest. Here, he speaks with haiku. Boba Fett speaks in a prose, a language often used by the lower classes of society during Shakespeare’s time. Many characters of the Star Wars Universe often look down upon bounty hunters, much like how high society looked down upon the little people, back in the day.

Speaking of dialogue, sadly, there’s less chorus singing exposition in Empire to move the story along. This is sad, because it was one of my favorite elements of the first book.

One of the funniest moments in The Empire Striketh back is a scene where a group of Ugnaughts are merrily singing while they work. This reminded me of the Munchkins from The Wizard of Oz.

The book ends with a few great final lines: “Our story endeth, though your hearts do burn, and shall until the Jedi doth return.”

I’ll be looking forward to the conclusion of Shakespeare’s original trilogy and I’m hopeful for his future adaptations of the prequels, as well.

“May the verse be with you.”

Strength: Combining history’s greatest poet with one of history’s greatest space operas.
Weakness: Luke’s incessant whining is crystal clear; by the Bard’s language or not.
WTF Moment: Were the droids actually doing Princess Leia’s dry cleaning? Were a trio of AT-ATs talking to each other, hyping themselves before battle? Just another day in the Elizabethan Era.

Notable Quotes:
– “O, switch off!”
– “Wars not make one great.”
– “I would as eagerly kiss Wookie lips.”
– “This is no cave, and I am not his food.”
– “The Fett doth promise it, and it shall be.”
– “If thou but knewest all the power of the Dark Side.”
– “Against the Force you do rail; that is why you fail.”
– “Now all the fallen AT-ATs I salute, as for my noble Emperor I shoot!”
– “Alas, with this promotion comes some dread, for Vader hath no rev’rance for the head.”