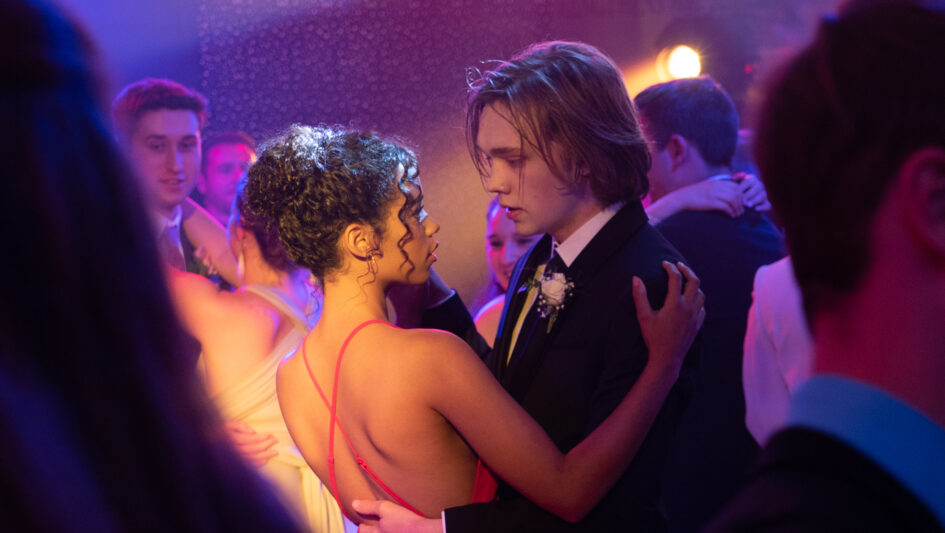 Words on Bathroom Walls is a new feature film from director Thor Freudenthal, based on the book of the same name by Julia Walton and adapted for the screen by Nick Naveda. The story focuses on the day-to-day struggles of a high school senior trying to cope with the mental disorder schizophrenia, a chemical imbalance that causes hallucinations both visually and audibly. As the disorder has no cure, those who have schizophrenia suffer not only from its symptoms, but are also classified as insane by those around them. Words on Bathroom Walls takes it deeper and tries to show the real person living under the stigma and the horrors experienced when one’s own senses turn on them with no notice.

Adam (Charlie Plummer) is a witty, introspective teen. His dad left when he was young, leaving him and his mother, Beth (Molly Parker), to fend for themselves. Having been misdiagnosed his whole life, Adam soon starts experiencing audible hallucinations. The voices came and went, until one day he had a psychotic episode, seeing things and people who were not there, in addition to hearing the voices. Having injured a fellow student, Adam was expelled. With hopes of graduating and attending culinary school on the line, Beth and her live-in boyfriend, Paul (Walton Goggins), enroll Adam into a Catholic school in hopes that with his new medication and treatment, Adam will be able to graduate and keep his goals.

Initially, life is good at the new school and with his treatment. Adam meets and falls in love with Maya (Taylor Russell), a girl whose aspirations for being the top of her class are only exceeded by her need to take care of her dad and brothers. Adam also befriends a priest named Father Patrick (Andy Garcia), who helps guide the teen through his new life at school. But soon, the meds begin to fail Adam and his hallucinations (portrayed by Lobo Sebastion, Devon Bostic and AnnaSophia Robb) return, along with the dark visions and voices. Feeling that his return to normalcy is threatened, Adam plunges deep into his psychosis with terrifying results that could affect his future, both academically and romantically. 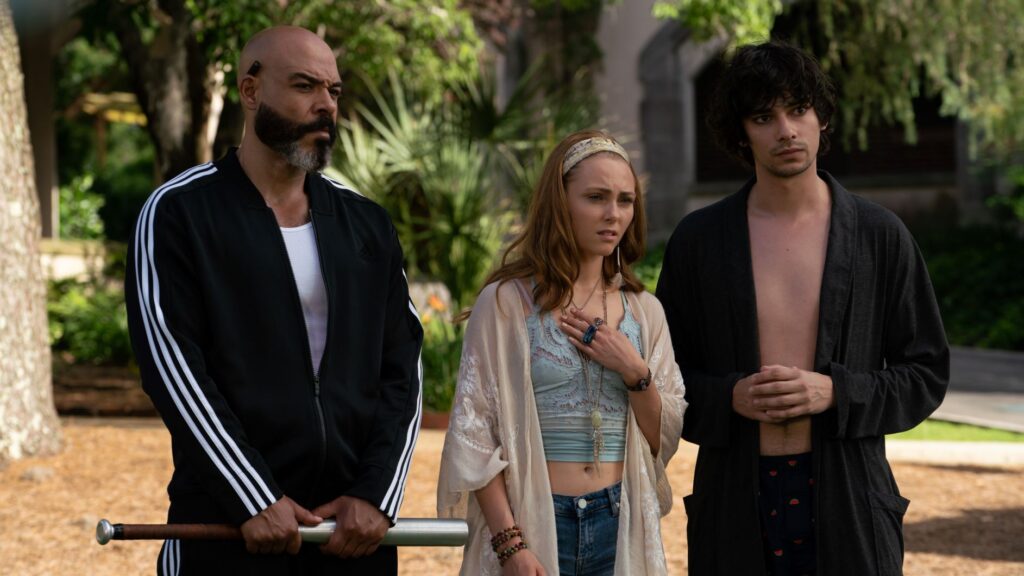 I have to admit that before I viewed Words On Bathroom Walls, I had very little knowledge or understanding of schizophrenia. I knew it was a mental disorder and I knew somewhat about the hallucinations it caused. But what I did not know is that in some cases, the person experiencing the trauma of the mental illness is “normal” in all other aspects of their lives. They think normally. They have dreams and aspirations. They are not wrapped up in an alternate reality all the time. It is like the walls between reality and illusion crumble from time to time, making it hard to differentiate between the real world and the illness itself.

Typically, I review films that are rooted in the horror genre. The supernatural evil that exists in those films is usually easy to combat. Bring out a sword, a gun or some other weapon and typically the hero or heroine can dispatch the vile entity in the end. However, Words On Bathroom Walls shows that a person’s own mind can be the “bad guy.” And how do you combat yourself? How do you effectively prepare and protect yourself from your internal thoughts, feelings, senses and emotions? You can’t. And that is why Words On Bathroom Walls brings up a topic that is scarier than any monster movie out there.

Words On Bathroom Walls is not the first film to tackle schizophrenia. Probably the most popular film about the subject, A Beautiful Mind, was released in 2001, telling the story of Nobel Prize winner John Nash and starring Russell Crowe in the role. The movie received high praise from mental health professionals for creating a better understanding of the mental disorder. Prior to this, Robin Williams headlined the 1991 film, The Fisher King, which blurred the lines between true schizophrenia and post-traumatic stress disorder, making it appear to those who saw the film that the two illnesses were interchangeable. And The Soloist, released in 2009, told the true story of Nathaniel Anthony Ayers (Jamie Foxx), a man diagnosed with schizophrenia and followed his friendship with Steve Lopez (Robert Downey Jr.). The film has been noted for its very accurate portrayal of the ethical issues around treatment for schizophrenia, as well as the cultural ideology around the disorder. Time will tell what the consensus will be on Words On Bathroom Walls.

The tone of the film is set by Charlie Plummer, in what I can only describe as a fine performance. He voice fluctuated from cool and confident (or as cool and confident that a teenager can have), to quivering and emotional when his visions took over. His disheveled look early and late in the film gave way to a more “put together” look during the mid-points, adding to the belief that he truly was on a road to effectively living with the illness that plagued him. His facial features told the story all too well, and I found myself emotionally invested in him, even though I knew it was only a film. Writers and directors can strive for that, but only a truly unique actor can convey that effectively, and Charlie excelled at doing so.

With theaters opening soon, Words on Bathroom Walls is one not to miss. I give the film a perfect five out of five stars. Prepare to get emotionally invested in the story, as Charlie Plummer and the cast behind him put on a story that pulls at the heart strings from beginning to end. I hope that Julia Walton continues to make great stories such as this one.